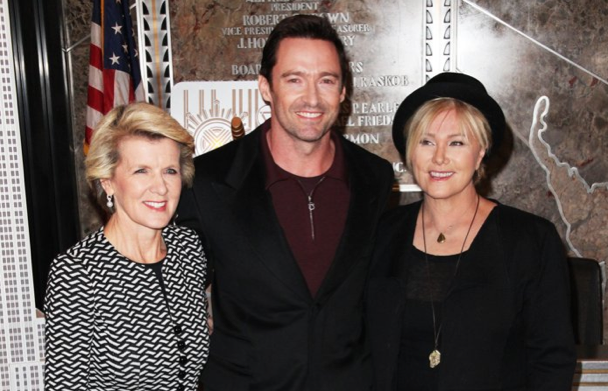 TTN: That’s not a promotion, THIS is a promotion: Hugh Jackman and Deborah Lee-Furness fly the highest flag possible for Australia Day.

After a hugely successful year promoting the cause of adoption in Australia, Deborah Lee-Furness and husband Hugh Jackman have posed for photos with Foreign Minister Julie Bishop to promote the turning of the Empire State Building green and gold for Australia Day.

The news has made headlines in the UK, US and Australia.

As Foreign Minister Julie Bishop looked on proudly, Hugh Jackman and his wife, Deborra-Lee Furness, gripped the lever and swung it dramatically upwards. Camera flashes whirred as Australian green and gold lit up the upper floors of a scale model of the Empire State Building.

The “ceremonial” lighting of the building was held on Friday afternoon to celebrate the real thing on Sunday, when to mark Australia Day, America’s best-known skyscraper will be bathed in green and gold.

The minister joined the star couple and the three of them beamed before the model as photographers barked orders – “To the left, Hugh! Look to the left!”

A few minutes later and the talent and the media pack moved from the Fifth Avenue lobby of the Empire State to its viewing deck for another round of photographs. After someone politely asked Ms Bishop to move aside, Jackman equally politely pulled her back into the focus. Together they squinted into the bitterly cold sun over the Hudson River as Jackman tried to point out the West Side building in which he and Furness live with their children.

The initiative is Jackman’s. He had been contacted by someone from the Empire State back in October asking if he would ever like to host a function in the building.

Jackman, who has become something of a de facto cultural ambassador for Australia in New York, explained that the building’s management had quickly embraced the idea and he hoped the green and gold colours might inspire New Yorkers to visit Australia. “We’ve just got to explain it’s for Brazil.”

Ms Bishop’s day in New York was busy. Before the lighting ceremony she gave a speech at a function hosted by G’Day USA and the Australian Outlook at the Harvard Club. She left to prepare for a formal dinner honouring News Corp chief executive Robert Thomson.

Earlier in the week, she held trade and defence meetings in Washington and gave the keynote address at the Alliance 21 conference, hosted by the United States Studies Centre and the Washington-based Centre for Strategic and International Studies.