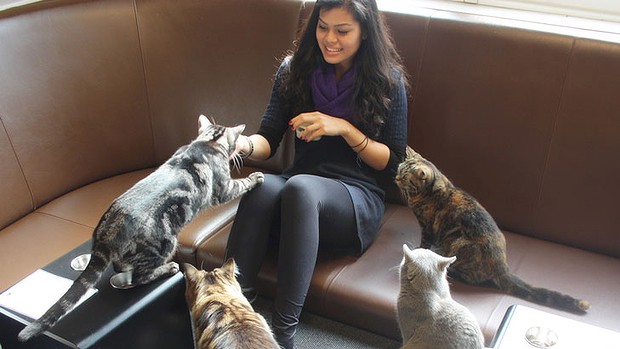 There’s no denying Australians love their pets. So much so that many businesses, such as cafes and hotels, advertise themselves as “pet-friendly”. But a new cafe is offering a solution for people who love animals but aren’t in a position to own one.

Australia’s first cat cafe will open in Melbourne this July. The premises will comprise a cafe and an area that houses a number of cats that people pay to visit and interact with. The idea came from husband and wife team, Anita and Myles Loughran, after they visited a cat cafe in Tokyo on their honeymoon. After returning to Australia and becoming dissatisfied with their jobs, they decided to see if starting their own cat cafe was feasible.

“We joked about it at first but then I felt it was something that people would really get behind,” Anita Loughran says. “And now nearly a year after first discussing it, we expect to open this July in a building next to the Queen Victoria Market.”

The cafe area is on the ground floor while the cats are located on the first floor. “There are four rooms for people to interact with the cats and a fifth room which is just for the cats and where they stay overnight,” Loughran says.

Loughran says the biggest challenge in getting the cafe off the ground was convincing Melbourne City Council that she was serious. “They didn’t think it was possible because of health and safety regulations, but after three months they came on board with the idea.”

A keen supporter of the idea is the animal management department of the Melbourne City Council. “They have an issue with international students who come here to study but miss their pets so much they go out and buy one for the time they’re here,” Loughran says. “But when they go back home they just dump them. It is hoped the cafe will help alleviate this problem as it will give students a place to come and interact with animals without needing to own one.”

Funding the business was another challenge and Loughran says they turned to various sources. “We have put all our own money into the business, including an inheritance I came into,” she says. “But we needed more so we have run two funding campaigns with [crowdfunding platform] Indiegogo.”

The couple chose to go with Indiegogo as you get to keep the money you raise even if you don’t reach your target amount. In their first campaign they wanted to raise $45,000 but only managed $11,000, and in their second were aiming for $5000 and to date have raised more than $7000.

Loughran says there is a maximum of 15 cats allowed, although the final number they will have is yet to be determined. “We are working with animal shelters to find the animals,” she says. “The cafe will become their permanent home; we won’t be adopting them out if someone takes a fancy to one as not only are there legal hurdles around that but we think that’s too disruptive for the animals. However, we will be advertising the services of animal rescue shelters.”

Visitors who want to interact with the cats pay $10 for the first hour and then $5 for every half an hour. There are rules around interacting, such as not feeding them or waking them if they’re asleep, and there’s no limit to the amount of time they can spend with them.

While this is the first cat cafe of its type in Australia, there are other cafes that allow people to bring their pets with them. Cafe Bones in Sydney’s Leichhardt describes itself as “the world’s first truly dog-friendly cafe” and serves pupacinos for dogs, along with coffees for their owners.

Also popular is the dedicated pet restaurant Chew Chew, on Sydney’s lower north shore, run by pet nutritionist Naoko Okamoto. The restaurant has been operating for four years and doesn’t serve food for humans, only for dogs (although cat bookings are available by appointment after closing hours).

“People can bring their own food in and eat with their pets,” Okamoto says. “People love coming here, especially owners who have older pets as they like creating memories of their time together.”

Australia’s first cat café is set to open in Melbourne next month. Based in Queen Street, the cat café’s owners were inspired after visiting a cat café in Japan. Though the phenomena began in Taiwan in the late 1980s, cat cafés are popularly associated with the urban megapolises of Tokyo and Osaka. I recently visited such a café in Osaka, making me reflect on why such spaces are popular in big cities.

Personally, I only like animals at a distance. I like looking at tumblr posts of cute animals. I have never liked pets, but I was curious about cat cafés after reading Anne Allison’s recent book Precarious Japan, in which she discusses the ongoing recession in Japan and the precarity of many of the country’s young workers.

Gone are the days of a secure “salaryman” company job for life with more and more young people (including university graduates) struggling to find work and unable to afford to move out of the family home.

Concomitant with such precarity is a declining birthrate – due partly, according to Allison, to the wariness of young people to commit to relationships without secure employment. Japan’s younger generation has a significant amount of single “freeters” (free workers) in casual, un- and semi-skilled professions.

Nevertheless the financial juggernaut of Japan continues – new commodities enrapture the population as “torendii” (trendy) signifiers of coolness and the nation continues to be one of the largest consumer markets in the world. Alongside myriad cute toys, electronic gadgets and manga comics, the Japanese have become adept at the “experiential commodity”: turning experiences, once ostensibly outside the market, into an exchangeable “experience”.

The cat café is one such experiential commodity. Though you receive a drink and cake when you visit a cat café, visitors are really purchasing the experience of being in the presence of kitties. Allison posits that cat cafés operate as sites for the experience of intimacy that many young Japanese single freeters lack.

In particular, she notes that, in the café she visited, there are mostly female customers. In Japan, hostess bars and brothels abound – and though there are “host” clubs for women, they are considered rather tasteless. A cat café provides a space for the experience of intimacy without the obligations of a human-to-human relationship.

Further, such spaces – often visited in lunch hours – offer a relatively tranquil site away from the busyness of contemporary Japanese cities.

The cat café I visited was in Dotonbori, the popular “eating street” in downtown Osaka. It was on the fifth floor of a building housing traditional Chinese medicine practitioners, izakaya (pubs) and okonomiyaki restaurants.

Certainly, the café offered a tranquil respite from the touts and spruiking encountered at street level. The walls leading up to the entrance were covered in cute Polaroids of cats and, once inside, I was given a profile of all the kitties the café houses and a small container of shredded chicken to feed the residents. I ordered a pineapple juice and sat down.

Being averse to both meat and cats, I left the container open on the floor and waited for the kittens to come to me. Chun was the first to head over. He is actually described in his profile as “Healing cat!”. My neuroses only allowed a quick pat. But the young woman – dressed in “OL” (office lady) clothing – was more keen, and petted Chun while sipping a cocoa.

I looked around the “play” area for the cats – most of whom were sleeping – and took some photos and videos. The café’s soundtrack was jazz muzak interspersed with purring and meowing. The customers did not speak to one another. They focused solely on their new feline friends. I left feeling ambivalent (and reaching for my hand sanitiser).

The English writer John Berger reminds us that “pets” are a relatively recent category. He wrote in the 1970s that animals offer humans an odd kind of companionship. They “enjoy a kind of innocence … emptied of experience and secrets” in the eyes of humans, provoking nostalgia when encountered.

Of course, Berger’s point is that the way we think of animals, particularly domesticated ones, is a projection of how we see ourselves.

So, when the Melbourne cat café website proclaims that interaction with kitties can lower “high blood pressure, stress and anxiety” we can think about the cat café as culturally significant and resonant in a time when such medical problems are increasing due particularly to the labour relations of late capitalism.

With work becoming increasingly casualised, precarious and scarce in Australia – like in Japan ten years before – it is little wonder that the Melbourne cat café has already generated 14,000 “likes” on Facebook.

TTN: This is an article that exemplifies the PR that kicked off the cat cafe’s crowdfunding campaign.

Here’s the truth: being a crazy cat dude or dudine just isn’t the same when you don’t have a furry fellow to call your own. Surfing the interwebs for feline funnies is a pretty excellent way to wile away the day, and donning kitty-themed duds will bare your bonkers-cat-lady badge loud and proud, but sometimes all you want is to wind down after a strenuous week with a cuppa in one hand and a tabby furball in the other.

If your life is sadly devoid of said furball, and you happen to reside in the Garden State, we have a little tidbit that may brighten up your day: a cat café may be opening in Melbourne’s CBD very soon. Yup, you heard right. Taking a leaf out of Japan’s book, the clever pair Anita and Myles Loughran are in the process of setting up Australia’s very first moggy mecca, where you can sip a brew surrounded by rescue cats, any old time you want.

They need a little help to make it a reality, so if a cat café sounds like your dream come true, head over to their crowd-funding page and lend a hand (or paw).