Cairns violence out of control 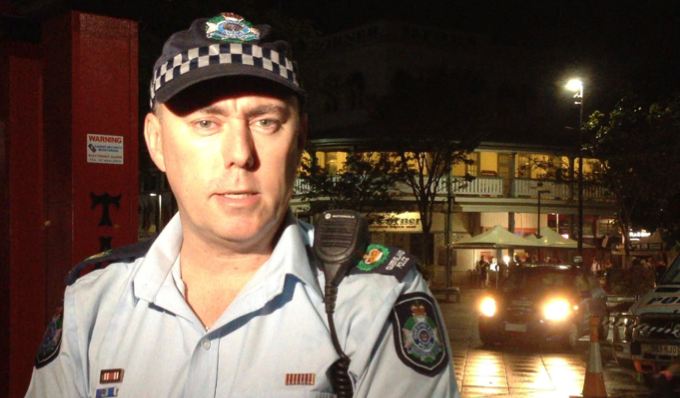 PICTURE: Snr Sargeant Chris Hodgman. Source: QLD Police Media
TTN: Cairns is getting a reputation for indiscriminate violence. Within the last few weeks, a 65 yo Cairns man and a 24 yo Korean man were both violently robbed in broad daylight. The frequency of attacks is being highlighted by the sentencing of a 17 yo who punched a young Korean woman in the face to rob her last year.

24-yo Korean tourist bashed in Cairns suburb: From the Cairns Post, 20th May 2014

23-yo Korean woman murdered in Brisbane: From the Courier Mail, 25th November 2013

Police are doing all they can, with a recent operation targeting alcohol-fuelled violence and anti-social behaviour resulting in 53 charges being laid. Police have not reported that the daylight attacks have been alcohol-related.

A TEENAGE “thug” has been jailed for violently robbing a female Korean tourist last year.

Jordan Dick, 17, punched the 22-year-old woman in the face to steal her bank cards and phone after she was pulled to the ground in the Cairns CBD in November.

Two 14-year-old male youths, who cannot be named, were also involved in the attack and all three appeared in the Cairns District Court yesterday to be sentenced.

The tourist heard male voices when she was walking towards City Place in the early morning to meet friends, the court was told.

Dick and one of the youths followed the woman while the other one kept watch.

The woman started to scream after she had been pushed to the ground by one of the youths.

She tried to hide her passport, bank cards and phone from the attackers but the court heard Dick punched her twice in the face and the other youth hit her with the heel of his hand before they stole her personal items and ran away.

The woman suffered a swollen cheek and a bruised mouth, and she vomited shortly after the ordeal.

CCTV footage from a nearby shop identified Dick and the other offenders and they were later arrested and charged with one count each of robbery in company using violence.

Judge Brian Harrison said it was a “cowardly attack” and slammed the teenagers for the “shocking treatment” of the tourist who was “going about her business”.

“This was a cowardly attack on a Korean tourist who was visiting this country,” he said.

“This town relies very heavily on tourism and the income people like this bring to town. The last thing this town needs is thugs like you thinking they have got a right to go and bash and rob people. She did not deserve the shocking treatment that was handed out to her.”

Dick was sentenced to 18 months’ jail and will be released on parole after he serves three, taking into account his age and guilty plea.

The youths were dealt with under the provisions of the Youth Justice Act 1992.