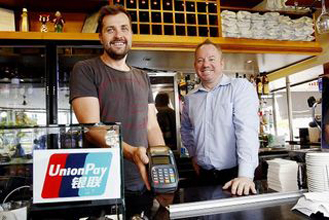 A MOVE by restaurateur Fintan Rafferty to install China UnionPay banking facilities and signs six months ago is paying dividends.

The Salthouse and La Pizza Trattoria owner believes he was the first in Cairns to add the system to his Marlin Marina and Esplanade businesses apart from Cairns airport.

He said as soon as he learned China Eastern Airlines would be the first to fly directly to the Far North he met airline officials in Sydney and asked for their advice.

“They told me to get China UnionPay,” Mr Rafferty said.

He said it required opening a Bank of China account.

“It was a simple process. None of the four main Australian banks are doing it until next year. I couldn’t wait until then,” Mr Rafferty said.

“China UnionPay is the most common card used in China (with 3.1 billion cards in circulation worldwide),” he said.

“Cairns businesses in general need to be more proactive and get up to speed.”

Mr Rafferty said China UnionPay cards were being used by customers every day.

He said Chinese tourists immediately recognised the logo and were happy to spend their money in his outlets.

La Pizza Trattoria manager Matthew Edwards said he observed Chinese tourists walk past and as soon as they saw the logo they stopped.

He said employing a Chinese supervisor, who spoke the language five months ago, had assisted in attracting Chinese customers.

“It’s picking up at night,” Mr Edwards said. Salthouse manager Shane Carter said they wandered into the venue and when they saw the sign “felt comfortable”.

“It makes them feel welcome,” he said.

Mr Carter said he had hired a waitress who spoke Asian languages with instant success.

He said the other night there were five tables of Japanese, three of Chinese and two of Koreans.

Mr Rafferty said he did not take group bookings nor liked many signs in his businesses.

But, he said, by having the China UnionPay facilities and signs he had given himself an advantage.