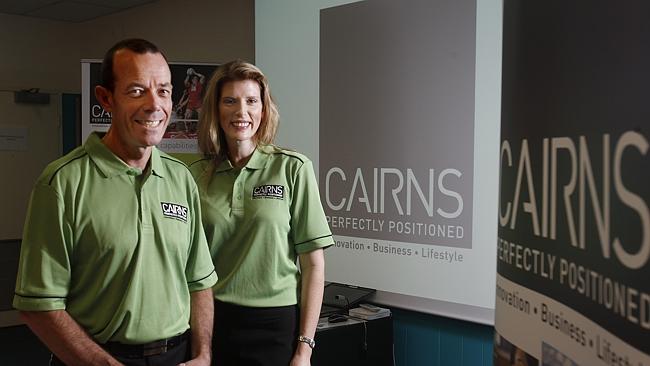 PHOTO FROM THE CAIRNS POST: Mark Matthews and Deb Hancock.

TTN Advance Cairns, the Cairns Chamber of Commerce and Tourism Tropical North Queensland have reportedly taken out a full page ad in Cairns’ Weekend Post to lobby ALP and LNP candidates for Queensland’s state election. Whilst it appears to be a positive initiative, The Tourism News is asking how heavily influenced the alliance were by the Murdoch papers in tropical North Queensland.

Murdoch has been called ‘a king-maker’ for his papers deciding the sway of voters during elections, a political reach that goes back to Thatcher’s Britain and before.

Cairns businesses join forces to get commitments from candidates

THREE of the tropical north’s leading business groups today declare war on the LNP and ALP, demanding and expecting funding commitments for six priorities to grow the region over the next three years.

Advance Cairns, the Cairns Chamber of Commerce and Tourism Tropical North Queensland have taken out a full-page advertisement in today’s The Weekend Post urging voters to ask their candidates “what they are doing to support our future growth”.

They are aiming at the seats of Cairns, Barron River, Mulgrave and Cook and primarily the LNP and ALP candidates.

(TTN Edit: A copy of the full letter is available here. The first request in the letter, a request for the $8.1b Aquis casino proposal to be waved through government, has been omitted by The Tourism News below.)

The group’s crusade continues over the three-week election campaign, with details on each of the priorities being released, a weekly update on report cards on each of the candidates, an election lunch involving the eight candidates three days from the election, and the final report card being issued on the day before the January 31 election.

They said the business organisations would lead the debate and ensure the region did not miss out on vital funding.

Ms Hancock said the groups represented 1800 businesses and 90 per cent of the region’s revenue of $7.8 billion.

“We are sick and tired of other regions getting our fair share,” Ms Hancock said.

“We want dollars and we want time frames … not just commitments,” she said.

Mr Matthews said it was “a call to action” from voters.

He said the projects would have to be funded.

“If it’s not in the budget, then it’s in the never-never,” Mr Matthews said.

“If nobody commits to them, then it’s a stand-off.’’

Ms Hancock said it was the first time the groups had joined together to campaign during an election.