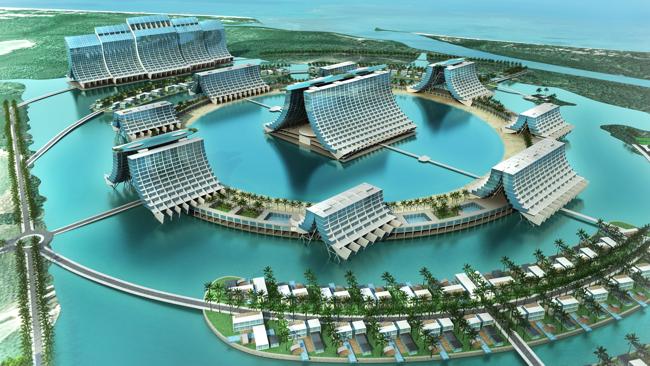 THE developers behind the Aquis Resort could be made to fly a blimp or weather balloons high over their land at Yorkeys Knob to show locals exactly how large the mega-structures would loom on the skyline if built.

That’s a suggestion from the Cairns Regional Council, which is asking the State Government to broaden the terms of reference for an Environmental Impact Statement that eventually will be used to help decide whether the $4.2 billion project can go ahead.

Because the Aquis was given co-ordinated project status by the Newman Government, the EIS process is the only chance for the council to seek further information about the development and for the public to lodge formal support or objections.

The council wants to make sure residents know exactly what they would be getting with the Aquis, which includes plans for several buildings the same height as the Yorkeys Knob headland and a main building another 25-35m taller than it.

They have requested the Hong Kong developers be required  as part of the EIS  to tether a blimp or weather balloons at the proposed heights of the buildings to demonstrate the scale of the resort.

“This will assist in gaining a better appreciation of the scale of the development being proposed,” a report to councillors states.

Councillors will vote tomorrow whether to endorse the CRC’s submission on the terms of reference for the EIS.

The council’s top brass across all departments have identified issues in the State Government’s draft terms of reference for the EIS and made suggestions about how it should be broadened or toughened in certain sections.Among the other issues the CRC wants the Aquis’ developers to address in the EIS are:

SPECIFIC information about the operational phase, particularly peak use.

ADDITIONAL information about the sports stadium, such as its management model and the fees for local community use.

A DESCRIPTION of how the development will contribute to community well-being through public open space.

ILLUSTRATE the visual impact from nearby private residences and public places such as roads, lookouts and the foreshore.

AND detail the merit of locating the resort in a known flood plain area.

Other organisations and members of the public have until September 9 to give their feedback on the draft terms of reference.

CHINESE billionaire has chalked up his first win in a bold plan to build a $4.2 billion mega-resort and casino in Cairns.

The project would include nine luxury hotels, a sports stadium and high-end retail shopping.

“What North Queensland is missing is the man-made wonder of the world,” said Mr Fung, in his submission to the Queensland Government.

The Aquis project would rival the great man-made structures in Macau, Dubai and Singapore and be “without peer in Australia”, he said. The Hong Kong-based banking and property tycoon said the mega-complex would be built with no impact on the nearby Great Barrier Reef.

It would be a magnet to draw international visitors to North Queensland’s ailing tourist-dependent economy.

Latest figures show the 5.7 million overseas tourists who came to Australia were worth $19 billion, but of those just 691,000 headed north spending $877 million.

“Facilities of the like of Aquis don’t only attract the Chinese mass market middle class, but also the big spending, high value, ever expanding Chinese upper class,” Mr Fung said.

He said he asked for “no favours or financial input” from the Queensland Government for its support. “I only seek investment certainty from an approval process.”

Deputy Premier Jeff Seeney’s office last night confirmed the grand plan had been declared a co-ordinated project to be overseen by the Co-ordinator General’s office.

The Courier-Mail can exclusively reveal the grand vision for the state’s newest casino.

It also proposes a Convention and Exhibition centre, 2,500-seat theatre, 18-hole golf course, 13ha reef lagoon and one of the biggest aquariums in the world

Under approvals, building on the 750-acre beachside site at Yorkeys Knob would start mid-2014 and be completed by 2018.

It would create 9300 jobs in construction and 10,000 full-time jobs when operational.

While Aquis is a “mega resort” project the proposed casino is only slightly bigger (in terms of tables and machines) than Crown Melbourne. Aquis is seeking approvals for about 750 tables and 1500 poker machines.

The Cairns Reef Hotel Casino exclusivity deal on its casino licence expired several years ago. But the Aquis bid does not seek a monopoly or duopoly with state revenue from gaming predicted to increase dramatically.

Advance Cairns chief executive Mark Matthews said it would be a huge economic boon for the north.