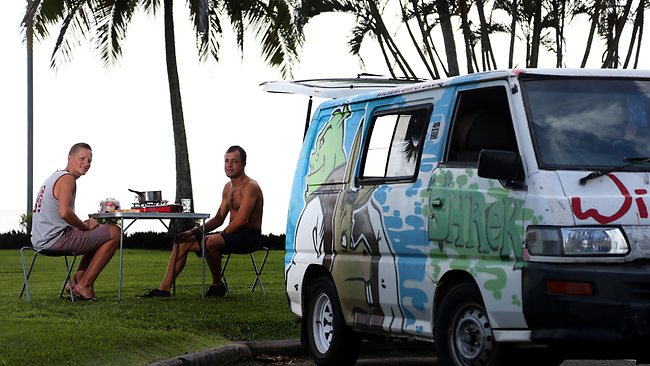 A ‘fine’ way to treat tourists: Call to stop penalties and provide more facilities for self-drive campers in Cairns

Drive tourism accounted for almost 70 per cent of visitors to Queensland last financial year but those who stay overnight in Cairns can be hit with a $220 fine.

“You can drive around Europe and all around Australia, pop onto the side of the road and camp for a while – why aren’t we doing it here?” he said.

“Because they don’t spend much money on the actual transport and accommodation, they spend up big on tours and sightseeing … they’re very important to us.”

“We need to recognise that that’s a trend in the market and we need to embrace it,” he said.

“We’ve got the facilities to do it right here in the city with no expenditure to the ratepayer and a potential source of income for ratepayers.

“(The fines are) a deterrent and leave a sour taste in their mouth.”

“That would cater for the grey nomads who I know talk about the lack of welcoming facilities in Cairns, down to the old cheapo bongo van with a European backpacker in it,” he said.

“Commercial parks have many costs to bear in order to be allowed to operate, such as workplace health and safety requirements, rates, licences, (and) security,” he said. ROAMING HOLIDAY: German backpackers Hannah Nembeck* and Hannah Averitz* getting ready for the day ahead on the Esplanade. Pic: Stewart Mclean

Thirteen on-the-spot fines have been issued since.

But self-drive travellers argue more facilities are needed in the CBD to accommodate their market, a call that has been echoed by local business owners.

French backpackers Fabien Martin and William Grillot, both 25, have been travelling along the east coast in a Wicked camper, parking in back streets during their stay in Cairns. “Compared to Adelaide, Melbourne and Sydney, it’s totally different, not as good.”

They admitted they were concerned about being caught camping illegally, their friends having copped a hefty fine in Byron Bay.

“We want to come back so we would pay,” Mr Martin said.

But Hannah Averitz* and Hannah Nembeck*, both 19, said they wouldn’t cough up the cash.

“I think most people would walk away from it because they’re backpacking and they can,” Ms Averback said.

“It’s hard to find us because we don’t have an address in Australia.”

The childhood friends from Germany camped on The Esplanade on Tuesday night and said they move around to avoid getting caught.

“We could afford to pay for a camping site but you want to save that money to do some other stuff,” Ms Averback said.

Enforceability has proved problematic for council – only eight of the 64 fines issued during the two-week blitz in October and November have been paid, with 36 infringements withdrawn because no address was obtained.

The issue of free camping areas for self-drive visitors is included in the current local laws review survey and residents have until close of business tomorrow to respond.

A council spokeswoman said further “blitzes” on illegal campers would depend on the outcome of the survey.

“An on-the-spot fine can be issued only when a person is caught in the act of camping  generally this means being asleep at the time with evidence that they have stayed overnight,” she said.

“In cases where council officers have responded to a complaint or where there has been some evidence of illegal camping without the act having been directly observed, a warning may be given and personal details recorded.

“Multiple warnings may result in a fine.”

The spokeswoman couldn’t specify how much was spent on enforcing the policy on illegal camping but identified The Esplanade and car park near Muddy’s Playground as hot spots.

*Names have been altered to protect the backpackers who have now grown up and don’t want to be seen shirking regulation.