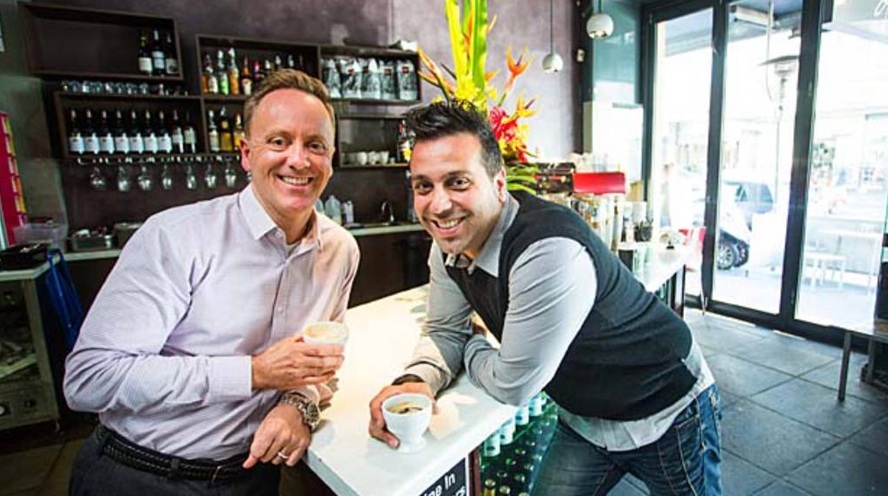 Declan Jacobs (left), a founder of the Suspended Coffee Society Melbourne, with Petros Prokopis, manager of Amici Bakery in Prahran, one of the first to get involved in the formal initiative. Photo: James Boddington

TTN: Smart marketers have turned the Italian concept of sympathetic coffees into win-win marketing initiative for cafes all over Australia.

The Italian concept of a ‘Caffe Sospeso’ – a sympathy coffee – has made it to the proud coffee scenes of Prahan in Melbourne, Leura in the Blue Mountains, and Marrickville in Sydney. In an effort to combat urban sprawl with genuine community initiatives, Caffe Sospreso is a cost-free way for cafes to promote themselves and get people talking.

Whilst the tradition grew organically in Italy, travelling Australian cafe operators have brought the concept home and implemented it in cafes. Local councils have become involved to further promote initiatives encouraging a sense of community.

At the end of the WA Today story, below, is a list of cafes in Perth that have been experiencing burgeoning generosity from customers, with the additional effect of national publicity.

The Progress Leader story (bottom) identifies a similar program including food for the homeless, but fails to promote the program as effectively even though one of the  men pictured owns a business called Cafe Sospreso.

Coffees for the needy getting hot in Perth

Hundreds of free coffees are waiting to be claimed by Perth’s disadvantaged and homeless, as part of a growing trend of cafes offering “suspended coffees”.

The charitable concept offers customers the chance to buy a coffee that the cafe will later give to someone who can’t afford to buy their own.

Mugshots Espresso Bar owner Angelo Grieco cottoned on to the idea after visiting Naples, where the idea of suspended coffees – known there as caffe sospeso – originated.

“We actually saw it in Italy, in Naples, a few years ago and apparently it’s been there for quite a long time,” he said.

“We thought we’d introduce it, everyone’s caught on at the same time, it’s great.”

Mugshots is one of at least seven cafes in Perth offering suspended coffees.

In the week since introducing the now worldwide idea to his customers, almost 50 have been bought at Mr Grieco’s Fremantle cafe.

“People say ‘I’ll have that and three suspended coffees as well’.”

“Everyone has a bit of a down day and I think a cup of coffee or something warm, something that they can’t really afford helps.

“You see a lot of people walking by and looking and you can see they’d love to have a cup of coffee.

“We can’t save the world but we can do our bit.”

“At Woogi Espresso we were kind of doing that all the time, just not under any sort of concept,” he said.

“If someone came in that was disadvantaged or displaced we would just make them a coffee.

“I’ve got one local guy that comes in, I don’t even think he knows what it is, he just gets a free coffee.”

Mr Grabbi said his two Woogi cafes would offer a coffee to anyone “who looks like they’re in need”.

“We talk it up a little bit when they come in and people are really interested, they usually buy one straight away,” he said.

“I think the scope of suspended coffees can be broader than displaced, it can benefit anyone who’s having a bad day; a parent sitting at children’s hospital and needs to get out.

“If someone comes in and a three-piece suit that’s okay; if that person thinks he’s in need of a coffee he should get one. Hopefully he’ll come back tomorrow and buy one for someone else.

“It’s all about paying it forward.”

Cafes offering suspended coffees put up a sign advertising the service, but have more donations than claims, Mr Grabbi, who hoped to extend to suspended food, said.

“It’s a strange thing to encourage a homeless guy to come in and get a free coffee,” he said.

“A lot of people are a bit too proud, so we offer it to them.

“We get about two or three bought a day and we’ve currently got about 100 waiting.”

The problem faced by participating cafes is getting the word out to those in need.

“What we’re doing now is waiting on St Patrick’s [Community Support Centre] to give us a hand to get them claimed, let them be aware that we’re here,” Mr Greico said.

“They’re going to put it through their newsletter.”

Mr Grabbi noted a similar problem in the CBD.

“We need agencies to get the word out,” Mr Grabbi said.

“I started a little mail out to everyone from the children’s hospital to Mission Australia and Anglicare.

“When I spoke to Mission Australia and Anglicare they didn’t know what I was talking about, they thought it was free coffees for the staff, but people are catching on.”

What’s in a press release? From Inside Retail magazine

Sydney’s Marrickville Council is asking charity-conscious retailers in the city’s inner west to sign up to a coffee initiative inspired by Italian cafes.

Cafes located in many of Sydney’s latte set suburbs, such as Newtown, Enmore, and Petersham, are being called upon to sign up to The Suspended Coffee Initiative.

“Caffe sospeso” – literally translating to suspended coffee – is a tradition born in the cafes of southern Italy, where a little morning hit of espresso is seen as somewhat of a daily necessity.

The idea works by encouraging better-off patrons to pay in advance for an extra cup or two, which can then be consumed by a coffee-drinker-in-need later in the day.

Beejay’s, a weekend brunch haunt in Sydney’s industrial Marrickville, has already signed up to the initiative, which was formally and unanimously endorsed by the council last week.

The council is now approaching charity-minded cafes in its local government area, with participating retailers asked to use their individual discretion in allocating coffees to the needy.

Similar schemes have already been introduced in Brisbane and Melbourne, with another cafe in Sydney, Page’s, also already operating a similar concept.

A council representative told Inside Retail that it would be targeting coffee outlets primarily, however, that the initiative has potential to be rolled out for meals as well.

Channel 10, which has reported on the suspended coffee trend, links local interest in the concept to a photo of a homeless person drinking coffee shared widely on social media over Easter.

See the Marrickville Council meeting notes that endorse the initiative

Have a coffee and buy one for the needy

It began in Naples about 10 years ago and spread to Bulgaria – one of Europe’s poorest countries – earlier this year after widespread social unrest. Now Rita Capra and Declan Jacobs want ”suspended coffee” to become a regular order at cafes in Melbourne and Sydney.

The idea sparked interest around the world after a post on Facebook before Easter. Declan Jacobs, 50, a manager at a small Prahran telecoms company, was inspired by the Facebook post and set up the Suspended Coffee Society Melbourne Facebook page over Easter. He put up the money to print 200 window stickers and set about recruiting cafes to display them.

”It only takes one person to start something,” says Mr Jacobs. ”You don’t need a corporation on board.”

Mr Jacobs has been in touch with welfare agencies including the Sacred Heart Mission and the Society of St Vincent De Paul to discuss ways of letting needy people know where they can get a suspended coffee. ”Obviously they might not have access to the internet. So we’re thinking of providing printed lists to the agencies once cafes sign on,” he says.

Sacred Heart Mission’s Cathy Humphrey notes that a number of cafes around St Kilda are already welcoming some of the people the mission works with. ”There’s goodwill in the community to take this up,” she says. ”It will be important to engage cafe proprietors. Some could be challenged by dealing with people who are experiencing homelessness.”

But, she says, ”People really want to give and contribute. This provides a way for them to do it without making a big deal about it. It’s a nice, simple act of kindness.”

One of the first to get on board in Melbourne was Valley Xpresso, which has coffee carts in Lilydale and Woori Yallock on Melbourne’s eastern fringe. Valley’s Steve Taylor says, ”One of our customers posted the link on our Facebook page and I loved the idea. We do a lot of charity work up here and try to do things at the local level.”

Mr Taylor has donated 20 suspended coffees at each cart to start things off.

”There are housing commission places down the road, and people living in caravan parks because they can’t afford anything else,” he says. ”There are a lot of people who are struggling.

”It’s not too much for customers to chip in for one extra coffee a week. I can’t see how this won’t take off. We’re fortunate to be in it in the early days and help get it going.”

Amici Bakery in Prahran has also started by making $100 worth of coffees available.

Mr Jacobs says cafes overseas keep track of the suspended coffees in a variety of ways, including using bottle tops, tickets and boards displaying how many are available. He has also spoken to cafes about the ethics of how you treat the people seeking suspended coffee.

”We need to ensure that the person in need is respected and gets what they want,” he says.

What about fears that the suspended coffees won’t be honoured? ”We have to have trust in the cafe owner,” says Mr Jacobs. ”But the backlash on social media would be pretty severe if someone cheated.”

A GROUNDBREAKING program changing the lives of homeless and hungry people across Boroondara needs community support to expand.

Meals valued at up to $10 can be bought at three cafes (SpareChair Cafe, Bacio Dolce and La Porchetta, Hawthorn) with the member paying $2.50 and IECHS subsiding the remainder.

Customers at Hawthorn’s Caffe Sospeso can also buy an extra “coffee in suspense” for homeless people.

IECHS public health dietitian Anthony Bernardi said the program aimed to increase social participation in the community and give people access to a nutritious meal in a dignified way.

With an extra $30,000, the program had the potential to reach about 400 Boroondara people living in rooming houses or below the poverty line.

Mr Bernardi said an increase of 29 members in the past year showed a strong need in the community, and he called on cafes to join the program.

Bacio Dolce owner Jim Mariotis said: “They (the members) come in and sometimes don’t want to talk so we just make them feel welcome and leave them be.

“One guy wanted something over $10 so I just let him have it. I don’t mind because these people really get something out of dining out.”