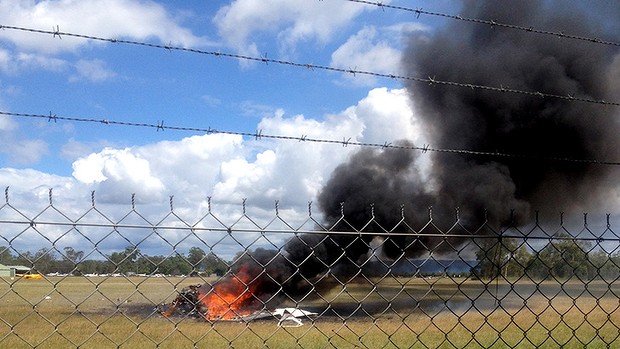 Further research by Fairfax has uncovered that Adrenalin Skydivers Bribie, also known as Skydive Bribie Island, had a very similar incident in 2010. The engine of a Cessna owned by the same operator cut out at 350ft but made an emergency landing in the 2010 incident. The Australian Transport Safety Bureau (ATSB) found no mechanical reason the plane should have failed at the time, but it is unknown at 24 March 2014 if this plane continued operation.

Adrenalin Skydivers Bribie (which the Tourism News uncovered was not a company, but sole trader Paul Turner) posted a photo on Facebook in 2013 of tail damage to a Cessna that Turner described as being from either a “hard landing or very fast steep descent”.

The ATSB have said they are aware of the Facebook post but are not sure which aircraft were involved in which incidents.

The Australian Parachute Federation (APF) has said to the ABC that they will conduct their own investigation into the crash, and AFP spokesman Grahame Hill says the APF will review standards of pilots and aircraft operations nationally after the plane crash.

Grahame Hill was reported (below) to have distinguised on Saturday that the incident was a ‘skydiving accident, not a plane accident’. From today’s statements, it appears that the AFP will now consider aircraft safety within their guidelines.

The ATSB categorises the Caboolture incident as ‘sports aviation’. The ATSB requires that all aviation accidents and serious incidents be reported. If Paul Turner’s two previous accidents are found to have not been reported by the operator, as a sole trader, he will be liable for the accident. If the aircraft involved in the incident was previously reported to the ATSB but not restricted from flying, CASA and the ATSB will need to explain to the public what bureaucratic process let down the 5 people killed in the incident.

See the updated ABC story in which the Australian Parachute Federation announces it will conduct its own investigaton here.

A Cessna 206 being operated by Adrenalin Skydivers Pty Ltd crashed and exploded at Caboolture Airport about 60 kilometres north of Brisbane on Saturday, killing all five on board.

The Australian Transport Safety Bureau (ATSB) is investigating the crash which resulted in the deaths of two skydiving instructors, a pilot and two customers about 11.30am.

The wreckage of a Cessna, registered to Adrenalin Skydivers, that made a forced landing on a gravel road in 2010 in a photo from the ATSB report. Photo: Supplied

Killed were customers Rahuia Hohua, 27, and her fiance Joey King, 32, instructors Glenn Norman and Juraj Glesk and the pilot.

No explanation has emerged for the crash although a witness has reported the single-engine plane took off, then veered left before plunging into the ground and exploding.

When contacted by Fairfax, Mr Turner said he could not talk because he was driving.

On August 12, 2010, a Cessna VH-TZV registered to the company and carrying six parachutists, took off near Gladstone on the central Queensland coast.

When the single-engine plane reached a height of about 350 metres, the engine cut out, according to an ATSB investigation report.

“Seconds after losing power the engine momentarily surged before again losing power. The pilot noted that the engine’s propeller was windmilling, which indicated the engine had not seized and a restart was attempted,” the report said.

The pilot tried moving the fuel selector to a different tank, checking the fuel mixture was rich, and cycling the throttle, it noted.

The pilot briefed the passengers about the situation and “broadcast a mayday as he configured the aircraft for an emergency landing”.

“The options available to the pilot for a suitable emergency landing area were reduced because of the aircraft altitude but the pilot was able to turn the aircraft away from a water course in an attempt to land on a gravel road.”

In the landing on the road, two of the skydivers sustained serious injuries while the pilot and another suffered minor injuries. The plane was badly damaged.

Despite an investigation, ATSB investigators appeared unable to pinpoint the cause of the crash.

It did find that an inspection of the fuel system found a small amount of orange coloured debris in the fuel manifold but that it would not have caused the engine failure.

But it did not make negative findings about the incident other than noting “pilots should consider the effect of an in-flight engine failure at low altitude has on the time available to manage that failure and find a suitable landing area”.

The report said the pilot’s decision to turn the aircraft away from a water course and conduct a forced landing on a gravel road “positively influenced the outcome for the occupants of the aircraft”.

A pilot who flew with the company’s Caboolture operation Mildred Spinoza told Fairfax that the Cessna involved in the Caboolture crash was different from the one the company had used previously.

Ms Spinoza, who is also a skydiving instructor, said the plane that crashed at Caboolture had flown “beautifully” last time she was in it.

Last year Mr Turner posted an image on his Facebook page showing damage to a plane he described as a “206” and wrote that the damage had been caused either by “hard landing or very fast steep descent”.

Ms Spinoza who is also quoted on Mr Turner’s Facebook page commenting on the damage, told Fairfax, the damaged plane in the picture was not the one in the fatal crash.

Air crash investigators on Sunday said they were aware of mechanical issues that affected that damaged Cessna 206, but were unsure if it was the same aircraft that crashed at Caboolture on Saturday.

Asked about the company’s Facebook page featuring a photo of the plane at the time, Air Transport Safety Bureau investigator Eric Blankenstein said “We are aware of that, yes, but we are not sure if it is the same plane.”

TTN, Saturday 22nd March 2014: A Cessna 206 on a skydiving tour has crashed to the ground at Caboolture Airport in southeast Queensland, killing all 5 people on board. The skydive had been set for earlier in the day, but cloudcover caused the operator to delay the flight in order to give divers a cloud-free experience. Family and friends of divers witnessed the crash. The jump was being conducted by Adrenalin Skydivers Bribie, also known as Skydive Bribie Island.

Skydive Bribie Island is not a registered company but is a sole trader, leaving operator Paul Turner solely liable for the accident.

Grahame Hill, Director of Aircraft Operations for skydiving peak body The Australian Parachute Federation, has declared “This isn’t a skydiving accident, it’s a plane accident; they were just on their way to do the skydiving.”

Hill’s declaration on behalf of an industry group highlights the many ways in which tourism operations are forced to pay multiple membership and compliance costs to groups that are not necessarily acting on behalf of sub-industries.

Five people, including four men and one woman, have been confirmed dead in a light plane crash in Queensland.

The Cessna 206 hit the ground and burst into flames on Saturday at Caboolture Airport, near Brisbane.

A male pilot, two skydiving instructors and two skydiving customers died when the plane plummeted to the ground shortly after taking off at 11.30am AEST on Saturday (12.30pm AEDT) and burst into flames.

The scene of the crash. Photo: Nine News

Emergency services rushed to the scene and fire crews extinguished the blaze.

Investigations into the cause of the crash are continuing and the airport remains closed.

Emergency services at the scene of the crash. Photo: Nine News

It then struck a crossing runway before bursting into flames. The presence of high-octane fuel meant the fire took over quickly.

A Queensland Fire and Rescue Service spokeswoman described the incident as a “significant crash”. Emergency services were confronted with a fire on arriving at the scene late Saturday morning, she said.

“Because it was a light plane, [the fire] was relatively easy to control,” she said.

A Caboolture Aero Club spokesman earlier would not confirm reports that the plane belonged to one of several skydiving firms that use the strip.

He told Fairfax there was a “fair idea” who the plane belonged to but until confirmation had been received, it would be wrong to speculate.

“The aircraft cannot be identified at this time – and I’m standing 50 metres from it,” he said.

The small Caboolture airfield sits approximately one hour’s drive north of Brisbane and is well-known to commuters on the Bruce Highway as aircraft can often be viewed landing or taking off above the road.

Gliders, helicopters and light aircraft are regular fixtures at the site which has only grass airstrips and is also used by flying instructors.

The post alleged the airfield was plagued with overgrown grass, bog holes, narrow taxi-ways, and unmarked culverts. It also claimed that because it was built next to a dump, there was a permanent hazard caused by ibis and kangaroos.

The same contributor also highlighted potential issues with both trees at the end of the south-east runway and powerlines. Another expressed concern about crosswinds, while a different pilot suggested the airfield was “cheaper” for pilots to use than other more developed runways in the region.

But the Caboolture Aero Club spokesman said there was no suggestion Saturday’s tragedy was connected to the airfield, dismissing the PPRuNe post.

It’s an uncontrolled airport with unsealed runways and, yes, there are kangaroos and birds,” he said.

However, he stressed the airfield safety surveyor that assesses the field once a year, and who reports directly to the Civil Aviation Safety Authority, had described it as “the best airfield on the east coast”.

“This place is in absolutely glorious condition and I mean long grass doesn’t exist,” the spokesman said.

Grahame Hill, director of aircraft operations for the nation’s peak skydiving body, the Australian Parachute Federation, was boarding a plane to Brisbane from Sydney on Saturday afternoon to help with the investigation.

He said the skydiving community was devastated by the crash.

“I’ve spoken to some people up there and they’re just gutted; it’s terrible,” Mr Hill said.

“It’s too early to tell what’s happened, but obviously something has gone wrong with the plane because it crashed right after take-off.

“This isn’t a skydiving accident, it’s a plane accident; they were just on their way to do the skydiving.”

He said the skydiving company, which he did not name, was a popular one and had never been involved in any incidents before.

“I’m on my way there now to do whatever I can to assist.

“Our association’s role is to regulate the safety of the industry and that’s what I’m on my way there to do.”