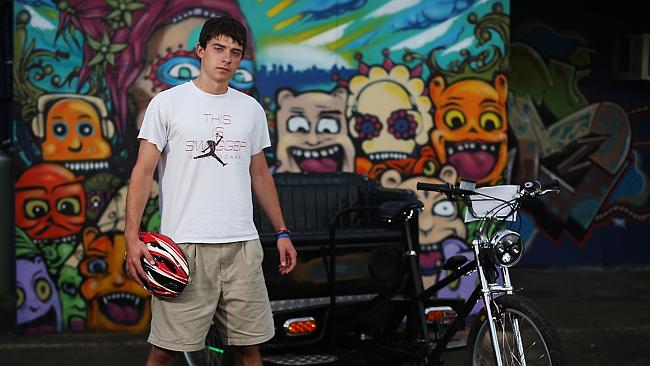 Cairns Regional Council is considering whether to grant Down Under Pedicabs a permit to continue operating on CBD streets. Pedicab driver Zach Wildofsky with his ride. PICTURE: BRENDAN RADKE

LOCAL  operators of a transport option popular with tourists – the pedicab – have been given a reprieve by the Cairns Regional Council after they were granted a new 12-month permit, but it comes with some tough conditions.

Down Under Pedicabs and Green Pedicabs – the only operators of the transport option in Cairns – were told to clean up their act or risk being ridden out of town.

Speaking at a council meeting yesterday, Councillor Richie Bates supported the decision but on the condition the council keep a close eye on pedicabs operators.

“We need to emphasise it is a trial and there needs to be more stringent control,” he said.

“It’s important that up to that 12 months point, it (their service) has been good enough.

“We don’t want to let it lapse if they’re not doing the right thing.

“I’m happy to endorse it on that condition.”

Within the eight months after Down Under Pedicab’s licence expired, the company received a lot of complaints about loud music and the behaviour of drunk passengers.

In the CBD alone, Down Under Pedicabs makes about 1000 trips weekly and its manager Sylvain Thomassin was happy with the announcement of a new trial period.

“From what the council said (to us), they didn’t want to see pedicabs leave Cairns,” he said.

Since receiving the high number of complaints, Down Under Pedicabs has introduced a series of measures to ensure city-goers are not bothered by their presence.

“We applied more security about this,” he said.

“We have people monitoring our drivers permanently.

“There is training provided to riders when they start, to teach them to take care of customers. Music is also limited by the amplifier and a limiter.”

Mr Thomassin said these new measure had decreased the number of complaints to zero.

“In the end, I’ve got someone with the drivers permanently, supervising what they’re doing,” he said.

A report prepared for the council about the pedicabs business stated that both Down Under Pedicabs and Green Pedicabs added value to the CBD.

“Despite some shortcomings in compliance, (Down Under) pedicabs offer an interesting element of activity within the CBD,” the report said.

“Greencabs have demonstrated experience of being suitable operators for high-profile public events.”

Mayor Bob Manning said the permits would improve the diversity of transport options in the CBD and continue to provide “a novelty element for tourists and for locals”.

“With the introduction of an additional operator, we should also start to see some healthy competition, which is always good for consumers.”

Operators who comply with the requirements will be eligible for a further 12-month permit.