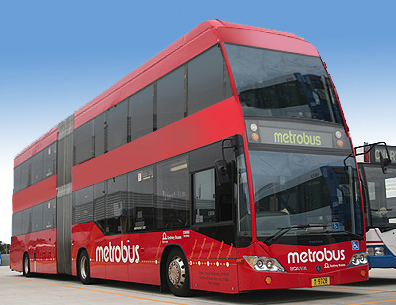 Photo: London-style double-decker buses are currently used in Sydney. The one pictured is soley for commuter routes.

The buses seat 88 compared to a ‘bendy’ bus’ 67, and those proposed for Adelaide have a Wi-Fi option.

ADELAIDE could get a fleet of double-decker buses if a public transport trial is successful.

An air-conditioned 88-seat Scania, which has disability access and a WiFi option, will be trialled in July, Transport Services Minister Chloe Fox said on Monday.

Current standard buses have 47 seats, while the articulated bendy ones seat 67.

Despite the $700,000 price-tag, the minister said the bus is cost-effective.

“Overseas experience has also found that double decker buses have been very successful in enticing people back to public transport,” Ms Fox said.

If the trial is successful, the government will begin talks to see whether a local manufacturer can supply double-deckers, she said.