Building everywhere but the Barrier Reef 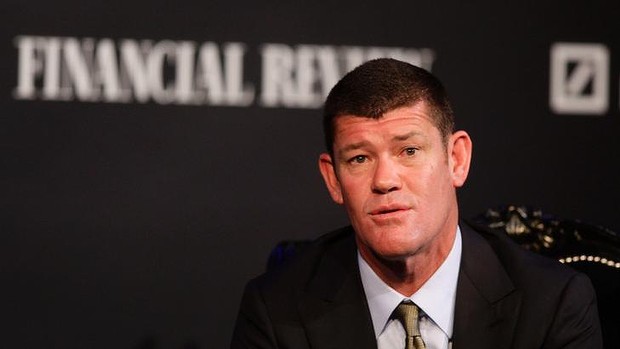 James Packer: “You can’t be in the gaming industry and not have a special reverence for Las Vegas – that’s where it all began.” Photo: Rob Homer

Billionaire James Packer now has a casino development pipeline worth more than $6 billion, after he bought land on the famous Las Vegas strip in a deal with hedge fund giant Oaktree Capital Management.

The pipeline of projects – the value of which is equivalent to Mr Packer’s own fortune – could have the Crown Resorts chairman hosting at least one lavish opening party every year for the next six years, across four countries.

Mr Packer’s expanding ambitions ensure Crown’s prospects are not tied solely to Australia, although investors hold some concern that the company may have too many projects on its plate.

Crown announced its latest project, a new Vegas casino to be completed by 2018, on Monday. The company has created a new majority-owned subsidiary that will be run by Andrew Pascal, a former president and chief operating officer of the Wynn Las Vegas casino and resort.

Mr Packer said the project brought together a “great local partner in Andrew, a leading financial investor in Oaktree, and the perfect piece of property”.

“You can’t be in the gaming industry and not have a special reverence for Las Vegas – that’s where it all began,” he said.

“We’ve always kept our eye on Las Vegas … we now have the ideal opportunity.”

The subsidiary will develop a casino on 34.6 acres across the road from Wynn Las Vegas, which has so far cost Crown $US280 million ($301 million). The price is a bargain compared with the $US1.2 billion paid by two Israeli property developers who bulldozed the former property, the New Frontier Hotel & Casino, in 2007 with plans to build a $US8 billion casino. The group fell foul of plunging property values.

Oaktree, which owns half the loan to the abandoned project, will provide “financial support” to the new venture.

Mr Packer has interests in projects being developed by Crown, which he controls 50 per cent of, and the Macau-based joint venture Melco Crown, in which Crown holds 33.6 per cent.

Melco will open a casino in the Philippines this year, its third in Macau next year, and its fifth Macau hotel tower in 2017.

A new hotel in Perth is slated for 2016 and the company has committed to a $1.5 billion hotel and casino at Barangaroo to open in 2019.

It has also signalled spending $US400 million on a resort in Sri Lanka and it is a shortlisted bidder, in a consortium with Chinese developer Greenland, to build a resort in Brisbane, which is expected to cost more than $1 billion. Melco Crown has also said it would spend $US5 billion in Japan, if the country legalised casinos.

If Crown and Melco committed to the last three projects, its total development pipeline, without Vegas, would extend to $13 billion.

ATI Asset Management’s head of research David Liu, who manages a Crown stake, said he wanted to see more detail on the Vegas project, but on the basis of rebounding revenues the plan “seems to make sense”.

Gambling revenue from the Las Vegas strip peaked at $US6.8 billion in 2006-07, but fell to $US5.6 billion in 2010 after the global financial crisis, according to data from the Nevada regulator.

Mr Packer, who first invested in the US just after that peak, was also burnt badly by the downturn. Crown dumped more than $2 billion in a series of ill-fated deals.

Mr Liu said Crown’s strategy of employing a local with experience on the ground gave him confidence.

But one Crown investor, who declined to be named, said he was worried the Crown management was “very aggressive in terms of their ambitions”.

“They’ve got a lot going on in many parts of the world,” the investor said. “It’s nice to have the options, but you still need to exercise care.”

Mr Pascal, who is the nephew of Steve Wynn’s former wife Elaine and once appeared to be a potential heir to the Wynn fortune, appears to have brought Crown and Oaktree together.

“When Andrew approached us and shared his vision for the site and his partnership with Crown, we were eager to invest a portion of the proceeds from our debt investment and become an equity partner,” Oaktree president Bruce Karsh said.

“We acquired our interest in the sorted Frontier site because we believed it was the best piece of undeveloped land on the Las Vegas strip.”

Crown expects to break ground in the latter part of next year and complete the project in 2018.