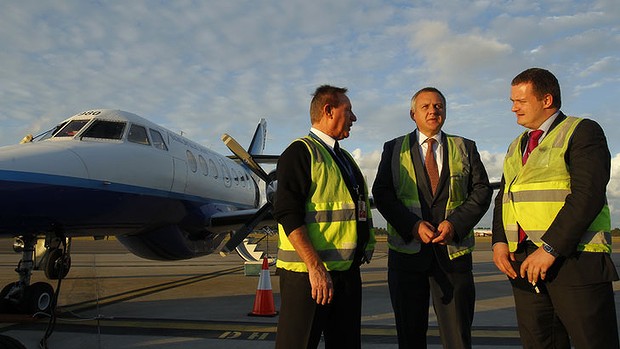 Regional carrier Brindabella Airlines has gone into receivership and is up for sale, with up to 140 staff facing redundancy.

All flights have been suspended on the Canberra-based airline, disrupting the Christmas travel plans of hundreds of customers.

The planes were due to be out of service until a maintenance review was carried out.

Up to 140 Brindabella employees are expected to learn their fate later this morning.

The airline says it is holding talks with the New South Wales Government to find other carriers who can pick up Brindabella’s routes, though Qantas has begun providing additional services.

He says the immediate issue is to get stranded Brindabella commuters onto planes in the lead-up to Christmas.

“Look, it is a sad day for all those people affected [because] we understand how critical air services are, particularly to regional communities, and especially at this time of the year,” he said.

Insolvency firm KordaMentha partner David Winterbottom says Brindabella’s planes are leased and KordaMentha has been in touch with the owners.

“We do know who leased the planes to Brindabella, they include various organisations, and we’ll be speaking to them about what they want to do with the planes going forward,” he said.

He said KordaMentha is now trying to see if some services can be restored.

“We’ll be speaking to the NSW Government, to other airlines and also to the regulatory authorities about making sure that passengers who want to fly the routes that Brindabella flew can get services,” he said.

“We’ll be looking to flesh that out over the coming week.”

If you are affected by the Brindabella Airline collapse, contact the Qantas call centre on 13 13 13.

There are fears regional NSW carrier Brindabella Airlines could be in a precarious financial position now that eight of its 10 aircraft are grounded by the Civil Aviation Safety Authority (CASA) for maintenance reviews.

Commonwealth Bank of Australia has a fixed and floating charge over the airline’s assets and forensic accounting firm KordaMentha is understood to be closely monitoring the situation.

Brindabella has licences to operate as the monopoly carrier on key regional NSW routes providing services between Sydney and the towns of Cobar, Moree, Mudgee, Narrabri and winter-only services to Cooma.

The Canberra-based airline’s owners, Business Air Holdings, have not lodged accounts with the corporate regulator in recent years.

Qantas Airways last month revoked a codeshare with Brindabella after CASA initially grounded four of its Jetsream planes because engine inspections were overdue. Two of those aircraft are now back in service, but CASA on Thursday grounded a further six Jetstream and Metroliner planes.

Transport for NSW said it was working on alternative transport arrangements for communities impacted by action taken by CASA including additional NSW TrainLink coach services between affected communities and other regional airports.

“[The CASA] action is likely to have significant impact on the airline’s schedule on licensed routes,” a Transport for NSW spokeswoman said on Friday.

She said Transport for NSW had formally requested Brindabella address concerns surrounding the provision of air services as outlined in its air licence.

Brindabella on Friday said the additional inspections ordered by CASA would “undoubtedly result in some disruption” in its network.

“Brindabella look forward to restoring scheduled services very shortly and apologise to any of its loyal customers who may have been affected,” the airline said.

It added flights scheduled to operate on Friday and over the weekend had not been affected. The airline has cancelled dozens of flights in recent weeks and temporarily suspended its services between Sydney and Orange, which is not a monopoly route.