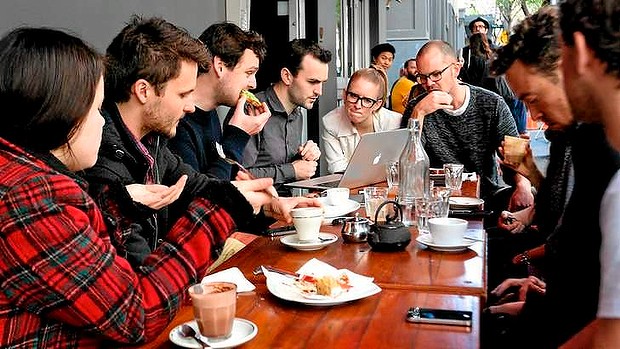 This is a PR-driven article, but as researched by the Sydney Morning Herald the 15% figure is a quote from the head of Restaurant & Catering Australia.

Restaurants making the most of the scramble for business over breakfast

Once reserved for the boozy lunch, business meetings are now held over baked eggs and a strong latte.

For Murray Bunton, regular power breakfasts have become the order of the day. The Surry Hills designer has ditched the office in favour of hosting daily staff meetings at a local cafe.

”It gets meetings out of the way early so we can focus on work,” Mr Bunton said. ”And it’s an incentive for staff to arrive on time.”

”In the past five years there’s been a 50 per cent increase in the number of restaurants open for breakfast,” Mr Hart said.

Breakfast was now serious business, he said, making up about 15 per cent of Sydney’s dining trade.

”Restaurants are now opening for three meals, which is great for the industry and for consumers. There is also stiff competition around breakfast prices,” he said.

Devoted cafe diners – many of whom willingly queue for up to an hour to get a table on the weekend – are opting for breakfast as a quick and cheap alternative to traditional fine dining.

”Breakfast has replaced dinner as the meal to eat out,” said Scott Robertson, the owner of Double Roasters cafe in Marrickville. ”It’s affordable and fashionable.”

The editor of the Good Cafe Guide, Jill Dupleix, believes business lunches are becoming rarer because ”they just take too long and have become too expensive”.

”Breakfast doesn’t cause a huge hole in the day as lunch can,” she said. ”One late colleague, one slow waiter, and you’ve lost three hours of your day.”