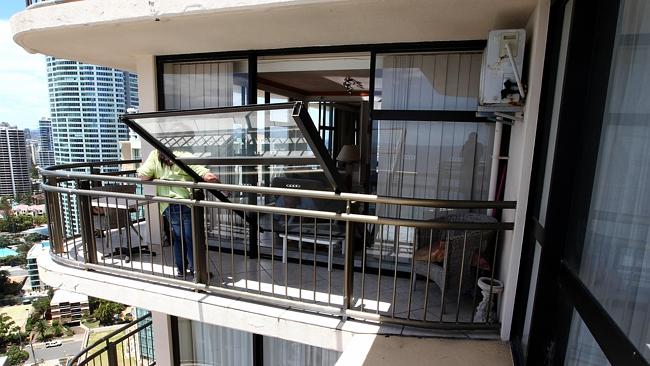 SCHOOLIES have lodged a complaint after a man gained access to their Surfers Paradise highrise unit and balcony hopped to another apartment to check on a prostitute renting there.

The Bulletin has obtained a copy of a written complaint to management at The Beachcomber in Hanlon Street after the incident at 3pm on November 28.

Signed by two schoolies, the letter said they had answered the door when a man claiming to be “the owner of the unit next door” asked to use their balcony to see the apartment.

“He looked out and then continued to jump the railing on to the apartment’s balcony,” the schoolies wrote.

“The slider door was locked by a chain. He got me to get the security guard on our floor at the time, so he could help him undo the chain.”

The female schoolie has told The Bulletin she and her friends had been advised repeatedly by management not to climb across balconies.

“I thought it was completely wrong. It was windy that day. It was 29 storeys up. If something had happened to him, me and my friend would not have known what to do. It was a horrible situation he put us in.” The apartments where the balcony hopping is alleged to have happened. Pic by David Clark Source: News Limited

The schoolies were later advised by managers that the man was not the unit owner but a body corporate committee member who had a master key giving him access to all floors in the highrise.

A police link email shows emergency services were alerted because a committee member believed a murder suicide may have occurred in the unit after “this prostitute was in a loud argument with a male” on the previous day.

“There has been no noise from that unit in 24 hours I am told by guards who have been on permanent standby of that door since the screaming incident,” the committee member said in the email.

“I hereby ask that you attend to break down this door and the body corporate will pay the expenses to replace this door regardless of the outcome. I do hope I’m wrong but I have grave concerns.”

Resort sources said the middle-aged prostitute, who has since left, had booked the unit for schoolies so she could “sell sex and drugs”.

Beachcomber resort manager Greg Kafritsas acknowledged that the committee member should have asked management to enter the unit.

He said he was concerned about the incident after having appeared earlier on television news pleading with schoolies not to climb across balconies.

“He should have come to us first. We are trying to set an example to the kids and we have a body corporate member jumping balconies. Imagine if it was a schoolie that had done this later and fallen and killed themselves,” Mr Kafritsas said.

Unit owners in several buildings have contacted The Bulletin after a report last Saturday where Q1 property owners voiced privacy concerns after learning a body corporate member had a master key to their apartments.