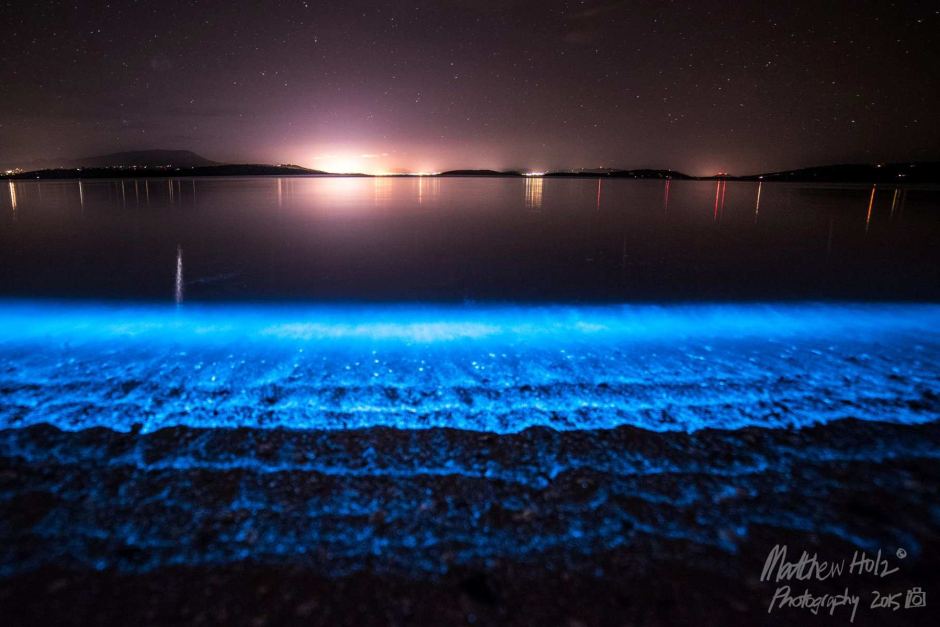 TTN 20th May 2015: A bioluminescent algae, rarely seen by humans, is causing a Hobart shore to light up in what is being called a ‘once in a lifetime’ biological event.

Nearby domestic tourists are flooding in, savvy photographers are getting their photos online ready for international news agencies, and one visiting American algae researcher is beside herself with excitement. The question is – are the promoters of Dark Mofo, the huge Hobart festival of light to be held in June – taking advantage of the free publicity?

Whilst the phenomena is likely to be very short-lived – the bloom has occurred the past 2-3 nights and is not expected to return – the rare sighting is perfect TV public relations fodder and is the exact sort of story that could catapault Dark Mofo from a Australian TV screens to nightly news segments across the USA and UK.

Parts of the River Derwent shoreline are lighting up like neon at night thanks to a flash mob of billions of minute marine organisms that glow in the dark.

Over the past few nights around Hobart, blooms of single-cell organisms called dinoflagellates have appeared, turning the water’s edge blue and drawing the curious out to the beach in the cold of night.

The phytoplankton are nicknamed Sea Sparkles but their scientific name is noctiluca scintillans, which literally means ‘twinkling night light’.

No one knows why but the tiny cells flash when disturbed, illuminating the water around them and animating the motion.

Jellyfish expert Lisa-Ann Gershwin was one of many who headed to South Arm, a peninsula south of Hobart, to enjoy the spectacle.

(TTN: Sarah Gershwin, below, is a marine biologist very excited to have stumbled upon what she calls a ‘once in a lifetime event’. See the ABC sea sparkle footage here.) 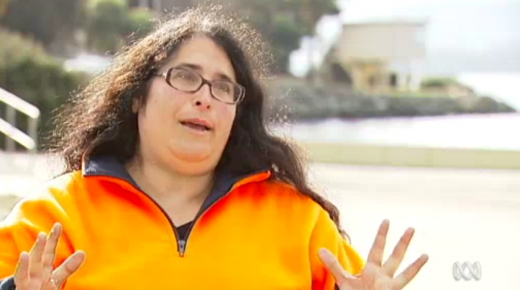 Dr Gershwin said the display was the most spectacular she had ever seen.

“It was the most wondrous sight imaginable,” she told 936 ABC Hobart.

“I’ve seen a lot of bioluminescence in the past 25 years and this is the best I’ve ever seen.”

Dr Gershwin said while bioluminescence was quite common, the concentration of the blooms she witnessed were very rare.

Word of the brilliant light show caught traction on social media after photographers ventured out to Mortimer Bay on May 13 to capture the most recent Southern Lights display.

Matt Holz, 35, said he and his friends noticed the water’s edge was turning up blue in their photos and went for a closer look.

“When we walked down to the water’s edge we noticed the little speckles of blue in the water and when we disturbed the water the whole water in front of you lit up,” he said.

After Holz and his friends posted their photos online other photographers went out searching.

Over the following nights, bioluminescence was reported at Howrah Beach, Carlton River and South Arm.

For keen aurora photographer Leena Wizz, this event was not to be missed and it did not disappoint when she found a bloom near Lauderdale.

“I got out of my car and was truly gobsmacked by what I saw,” she said.

“As I walked along the beach under my feet lit up with sparkling neon lights, I stomped and it shimmered even more.

“The entire shoreline was lit up neon blue and as each wave came in it lit up even more so.

“To stir the water with my hands and feet, to see my hands light up like something from Avatar was a thrilling, childlike experience.”