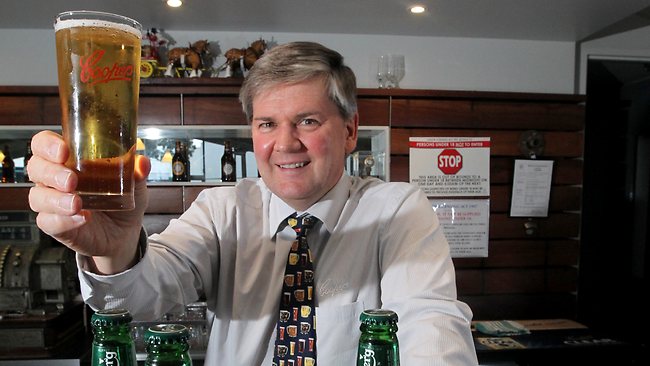 TTN: The story immediately below is from January; the only other major media coverage of the all-important beer distribution/competition issue has been the Lion chief executive’s new claim that beer needs an image shakeup (further below).

THE competition watchdog is investigating brewing giants CUB and Lion over their use of “tap contracts” to prevent hotel owners from selling rival beers, after a number of small operators complained that they could not sell their beer to pubs.

The Australian Competition & Consumer Commission has written to several small brewers asking for information “to better understand aspects of the supply conditions within the wholesale draught beer market” so it can assess whether “certain conduct” might be prohibited under the Competition and Consumer Act.

It is understood that the letter goes on to question the brewers on whether they have been unable to sell to venues because the publicans had signed restrictive supply contracts with the major brewers preventing them from stocking competitors’ beers.

Queensland brewer Wade Curtis, who posted his letter from the ACCC on Facebook and Twitter this week, said he had complained to the regulator three years ago about being unable to sell his Four Hearts beer to pubs because all of their taps were under contract.

“I had just started my own craft brewing business and had a launch at a venue in Brisbane — we got through two or three kegs, they were really excited and the manager was saying ‘we’ll have to have it on tap’, but then they suddenly went cold on the idea because they said they had a 50-50 tap contract with Lion and CUB,” Mr Curtis said.

In return for rebates on beer prices, the tap contracts generally stipulate a minimum proportion of sales that must be sourced from the relevant supplier — often 60-80 per cent of volume, but sometimes up to 100 per cent.

By operating on a percentage basis, pubs with 100 per cent contracts cannot even stock competitors’ beers if they install additional taps — something several brewers contacted by The Australian said they had offered to pay for, only for publicans to refuse as it would breach their tap contracts.

One brewer in Melbourne said its craft cider was selling well at a Melbourne venue until CUB “bought” the venue’s taps for its Bulmers cider brand. “They told us what they were paying and we just couldn’t see how it was economic,” the brewer said.

Tim Cooper, managing director at privately held South Australian brewer Coopers, said his company generally only took out contracts for event venues and festivals, and in pubs frequently had to fight for space with CUB and Lion.

“Because we’re only 4.5 per cent of national beer volumes, we’ve historically been happy to have those taps that publicans keep aside for guest beers,” Dr Cooper said. “But over the last year we’ve been more worried because we hear of cases where one or the other of the majors is trying to get contracts over 100 per cent of the taps.

“We understand we can’t expect 20 per cent of the taps, but  when publicans are being offered 100 per cent contracts then consumers will miss out.”

But Dr Cooper said even pubs that had contracts allowing some “guest” beers to be sold could be restrictive for smaller operators.

“One of the large publicans in Sydney said to me a few years ago: ‘Your Pale Ale is a problem — we’ve got it on only three taps but it’s still infringing my 90 per cent volume contract with Lion.’ And I said, ‘That’s presumably because your customers like drinking Pale Ale’, and he looked at me like I was a complete drongo because that was utterly irrelevant from his point of view.”

A CUB spokesman said the “vast majority” of pubs bought beer from several sources, and denied the company sought to lock up pub distribution to prevent smaller brewers from entering the market.

“As far as we are aware, all brewers, including CUB, offer some form of incentive to stock their products, such as volume rebates, maintenance of taps and equipment and so on,” the spokesman said.

A spokesman for Australia’s largest pubs group, ALH, said the firm did not have tap contracts at any of its 325 hotels.

An ACCC spokeswoman confirmed the regulator was making market inquiries on wholesale beer supply but declined to comment on the probe other than to say it did not involve a merger.

Goodbye to hairy guys in singlets holding up the bar, goodbye to the classic pairing of beer guts and footy shorts.

The head of one of Australia’s biggest brewers says the humble amber ale has an image problem and needs to take a page from the winemaker’s book.

Lion chief executive Stuart Irvine says winemakers had become good at talking up up the nutritional aspects of their drink, something brewers had largely failed to do.

“We need to reinvent our thinking of beer, which is a very natural product, it has only four ingredients – water, hops, malt and yeast,” he told a business lunch on Wednesday.

“It is a drink of moderation and is relatively low alcohol.”

Beer, which could once have been considered Australia’s national drink, has fallen out of favour, with consumption having more than halved since the 1970s.

Australian Bureau of Statistics data released in April showed that beer consumption had fallen to its lowest level since the mid 1940s.

That’s a problem for Lion, which is owned by Japanese-based beer giant Kirin and owns a string of well known beer brands, including XXXX, Toohey’s and James Boags.

“We need to answer some of the questions that consumers have about what beer does for you,” he said.

“Does beer make you fat? Well beer’s got no sugar in it, how many calories does it have in it? Well we should tell you that on the bottle.”

Australian Medical Association president Brian Owler said while including more information on beer labels would be good, there were virtually no nutritional benefits to alcohol.

“There is no doubt that alcohol and beer have a very high number of calories and if you drink a lot of beer you will get fat,” he said.

“But in terms of actually providing nutrition and vitamins and minerals and the things the body needs then actually beer is probably a very poor nutritional product.”

Associate professor Owler said the focus needed to be on changing Australia’s binge drinking culture, rather than on the nutritional make-up of alcohol.

“That’s what we need to be focused on in this country, not trying to con people with marketing around false claims of nutrition.”

Dietitians Association of Australia spokesman Alan Barclay said beer was not inherently any better or worse than wine or other alcoholic beverages from a nutritional point of view.

“We don’t really see alcoholic beverages as nutritious as such, they are considered to be an extra,” he said.

He said recent ABS figures had showed people consumed more calories on average from alcohol than any other “discretionary” foods including cakes, pastries and confectionary.

“I think it probably does suggest that we drink more than we probably need to as a community,” he said.