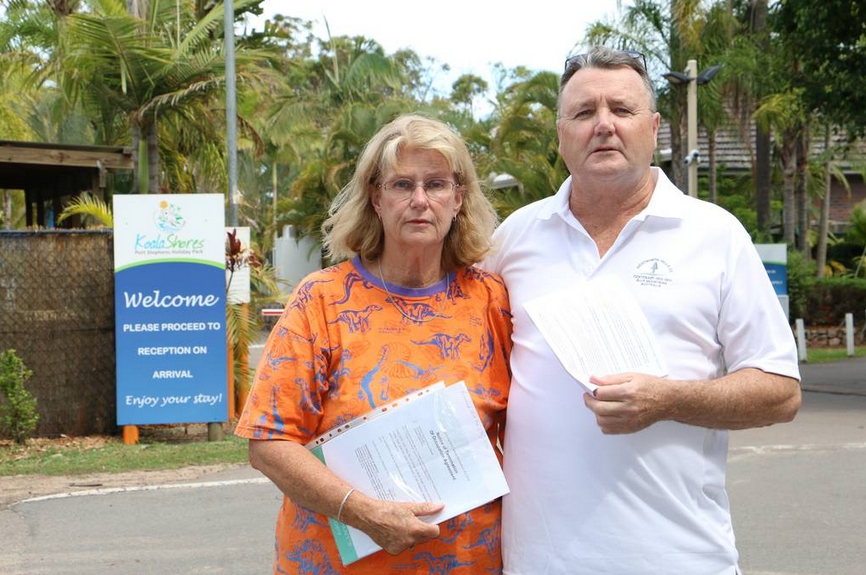 ANGERED: Penny Pepper and Michael Angold show their displeasure in being evicted after just six months. Photo from the Port Stephens Examiner.

Battle of Koala Shores heats up

UP TO 38 residents of a Lemon Tree Passage caravan park are facing a bleak 2015 after receiving eviction notices from the park’s owners.

Residents of Koala Shores, most of whom are long-term occupiers and pensioners, received six-month eviction notices in November requesting they relinquish their caravan homes to make way for tourism accommodation.

Park owners Jason and Sonia McErlane told the Examiner that many of the van owners respect the decision, “which is consistent with the spirit of the agreement entered into”.

“Unfortunately, some of the van owners have embarked on a range of activity to protest our decision,” they said in a written statement.

Among them are Penny Pepper and Michael Angold, who bought their van five months ago.

“Had we known about these changes when we purchased the van in June we would never have signed up. We stand to lose our $33,000.”

Three other long-term residents who approached the Examiner – Peter Litchfield, Eddy Davis and John Kostyk – say the notices have left a poor taste in their mouths.

“I have been here for five years and was hoping to see out my days here. I have searched for a place to go but there are just no vacancies in Port Stephens,” said 74-year-old Mr Litchfield.

Mr Davis, 65, believes the van owners should be compensated.

Mr McErlane said the park had a long-term casual occupation agreement with 38 casual holiday lease tenants and had never offered permanent accommodation as a lifestyle choice.

“We recently made the decision to focus on tourism business to sustain our future,” he said.

“Our agreement with the casual holiday lease tenants (in accordance with the Act) requires us to give 90 days’ notice.

“However, we provided all casual holiday lease tenants six months’ notice as they make plans for their next move.”

He refuted media reports that van owners were being evicted two days prior to Christmas.

“We provided them six months’ notice – enabling them to enjoy both the Christmas and Easter periods in the park should they choose to remain on site for that time.

“As part of our contractual agreement, casual tenants are required to take their caravans and any other fixtures with them when they leave the park.

“We did offer any tenants who no longer wanted to keep, or relocate, their old or run-down caravans the opportunity for us to take care of the removal and demolition.

“Those tenants were given an option to depart by December 23 so we could undertake that work ahead of our busy peak season. Otherwise, all tenants are welcome to stay on until May 2015 and arrange the removal of their vans when they depart.”

Mr McErlane said he welcomes the opportunity to discuss individual cases directly with any aggrieved tenants.

Kate Washington, lawyer and Labor candidate for Port Stephens, is lobbying the Minister for Fair Trading to intervene.

“The timing of this eviction notice is highly distressing, given that many of these residents are elderly and not in a financial position to find affordable, alternate accommodation,” she said.

The state Labor candidate for Port Stephens says 38 long-term residents of a caravan park at Lemon Tree Passage are facing eviction from their homes to make way for tourists ahead of Christmas.

Kate Washington says the residents have received an eviction notice asking them to leave by December 23.

The notice states that if they leave early next year, they face the costs of removing any structures, including vans, annexes, carports and paths.

Ms Washington said many residents now find themselves in a highly stressful situation and not in a financial position to find affordable, alternative accommodation before Christmas.

“Effectively they’ve been asked to hand over their keys or remove all their structures before Christmas,” she said.

“I’ve met one gentleman who’s been there for at least 22 years and there’s another family who’s recently bought into the property, and $33,000 spent five months ago and now they’re just expected to hand over their keys by Christmas.”

Eddy Davis, 65, said he is not in a financial position to fund the removal costs and now needs to find alternative accommodation quickly.

“I’ve got three daughters’ places I can probably stay at, shuffle myself between all of them but I don’t think it’s fair on them either,” he said.

“Myself, I’m on an aged pension.

“My mate Peter and myself, we’ve been around to several caravan parks so far trying to get in, but no one is taking permanent vans in.”