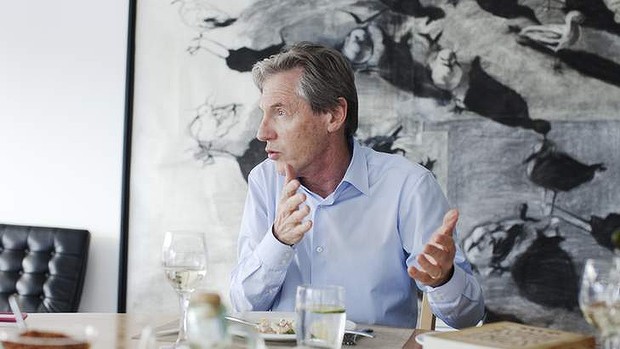 Malcolm Turnbull appeared on Richard Glover’s top-rating Sydney Drive program yesterday and declared that artist’s protests have “driven a stake through the heart of the Biennale.”

When 10 artists boycotted the all-important Biennale of Sydney for their major sponsor’s link to controversial immigration policy, the artists were successful in making headlines around Australia and drawing attention to what they see as abhorrent detention of asylum seekers. The company they’re protesting against though, Transfield Services, has little to do with its parent company, Transfield Holdings. Franco Belgiorno-Nettis created Transfield in the 1970s, and he personally spear-headed the creation of the Biennale of Sydney. Luca Belgiorno-Nettis has been a major advocate in high circles, plus Chairman of the Biennale’s board for the last 14 years.

Turnbull has expressed his disgust at the ‘ungrateful’ artists who withdrew from the 2014 Biennale of Sydney. Another panellist said that the artist’s protest should be directed at the Australian Government for their policies rather than at the corporate service provider, Transfield Services. A third panellist on Richard Glover’s show, Jane Caro, said that the desperation felt amongst the public in sympathy of people in detention is so strong that protestors are driven to make their point by any means possible.

Communications Minister Malcolm Turnbull has denounced the ”vicious ingratitude” of the artists who forced the withdrawal of Transfield as a sponsor of the Biennale arts festival over the company’s involvement in offshore processing of asylum seekers.

Mr Turnbull said losing the company, the festival’s founding sponsor, could spell the end of the event.

“Really, this is disastrous,” Mr Turnbull said. “If we lose the Biennale as a consequence of this that would be an absolute tragedy.”

The artists had threatened to boycott the Biennale of Sydney because it accepted money from founding partner Transfield Holdings, a company with a 12 per cent shareholding in Transfield Services, which won a $1.2 billion contract to run the Abbott government’s immigration detention centres on Nauru and Manus Island.

But while the artists have claimed victory in forcing Transfield Holdings to sever its 40-year tie with the arts festival, they may have achieved the opposite of their objective, the Communications Minister said.

Instead of encouraging the Abbott government to reconsider its harsh asylum seeker policies, the artists had succeeded in sidelining one of Australia’s great philanthropic families, who had generously supported the arts for more than 50 years, Mr Turnbull said.

“I hope the Biennale can survive but I think the artists that have done this have potentially driven a stake, not through the asylum seeker policy, I can assure you of that, but through the heart of the Biennale itself,” Mr Turnbull told ABC radio on Monday.

“There wouldn’t be a Biennale without the Belgiorno-Nettis family,” he added. “Franco, Luca’s father, was one of the great patrons of the arts, a sort of latter day Medici.

“I think it’s an extraordinary … the sheer vicious ingratitude of it all.”

He said that if the artists had a problem with the Abbott government’s asylum seeker policies they should boycott any arts events that accepted any funding from the federal government.

“Transfield doesn’t make government policy,” he added. “It’s in business. It is fulfilling a contract for the government”.

“We have listened to the artists,” the Biennale board wrote in its statement.

Mr Belgiorno-Nettis said the protests had reached a “crescendo” and he resigned so that “some blue sky may open up over this 19th Biennale of Sydney”.

“Biennale staff have been personally vilified with taunts of ‘blood on your hands’,” Mr Belgiorno-Nettis said.

“I have been personally vilified with insults, which I regard as naïve and offensive.

“This situation is entirely unfair – especially when directed towards our dedicated Biennale team who give so much of themselves.”

Mr Turnbull said he hoped Mr Belgiorno-Nettis and the Biennale board would reconsider their decisions.

Arts Minister George Brandis told Fairfax Media that Transfield was “a good corporate citizen” and he welcomed their “generosity and support for a variety of arts companies and institutions”.

But the protesting artists have indicated they will continue to target Transfield and arts organisations that receive its sponsorship dollars.

Artist Gabrielle de Vietri, who led the Transfield campaign, said other companies profiting from the policy of offshore detention centres would also be scrutinised.

“We are going to pursue this through divestment workshops and seeing how much more we can affect this policy through targeting the companies that are profiting from mandatory detention,” she said.

De Vietri said the Museum of Contemporary Art Australia and the AGNSW were among institutions that could suffer a backlash from artists over Transfield links.

The Biennale of Sydney has announced it will sever ties with its founding partner Transfield, caving in to pressure from artists angered by the company’s links to Australia’s offshore detention centres.

The board of the Biennale of Sydney also announced on Friday that Luca Belgiorno-Nettis had resigned as chairman, less than two weeks before the event is scheduled to begin.

Mr Belgiorno-Nettis’s resignation after 14 years and the severing of ties with Transfield represents a huge win for artists and refugee advocates and an embarrassing backdown for the Biennale board, which claimed the Biennale could not exist without Transfield and pledged its loyalty to the Belgiorno-Nettis family two weeks ago.

“The Biennale’s ability to effectively contribute to the cessation of bipartisan government policy is far from black and white. The only certainty is that without our founding partner, the Biennale will no longer exist,” the board said on February 21.

But in its statement issued on Friday, the Biennale board said: ”We have listened to the artists who are the heart of the Biennale and have decided to end our partnership with Transfield effective immediately.”

The financial ramifications of severing links with Transfield are not yet clear.

Nine Australian and international artists, including Olafur Olafsson, had pulled out from the Biennale in protest at the event’s sponsorship deal with Transfield Holdings. The company has a stake in Transfield Services, which was granted a 20-month contract last week to operate a detention centre on Manus Island.

Olafsson said he and his artistic partner, Libia Castro, would now reconsider their decision to withdraw from the Biennale.

”Obviously this seems to be a positive development but we need to talk together to see what our next response will be,” he said.

Mr Belgiorno-Nettis’ departure from the Biennale board is a significant blow to the family whose ties to the Biennale run deep.

In a statement, Mr Belgiorno-Nettis said he had resigned to offer “some blue sky” for the Biennale.

He also said it could be argued “that last year’s popular election vindicates this detention policy as supported by the majority of Australians”.

“The situation has now reached a crescendo,” he said.

“Out of the 92 artists, 10 artists have withdrawn to date. There would appear to be little room for sensible dialogue, let alone deliberation.

“Biennale staff have been verbally abused with taunts of ‘blood on your hands’. I have been personally vilified with insults, which I regard as naïve and offensive. This situation is entirely unfair – especially when directed towards our dedicated Biennale team who give so much of themselves.

“With many of the participating artists now torn between loyalty to our creative director and wanting to make a stand against this government policy, the core spirit of the festival is under a dark cloud.”

Mr Belgiorno-Nettis’ father and the founder of Transfield, Franco Belgiorno-Nettis, was the driving force behind the creation of the Biennale of Sydney in the early 1970s.

”I wear two hats: one as chair of the Biennale of Sydney and the other as a director of Transfield Holdings; both organisations conceived by my father and nurtured by my family over many decades, Mr Belgiorno-Nettis said.

The Belgiorno-Nettis’ are important patrons of the arts in Sydney; Luca’s brother Guido Belgiorno-Nettis is chairman of trustees at the Art Gallery of NSW, which is a principal venue for the Biennale.

Deputy chairman Andrew Cameron will lead the Biennale until a new chairman is appointed after the end of the event in June.