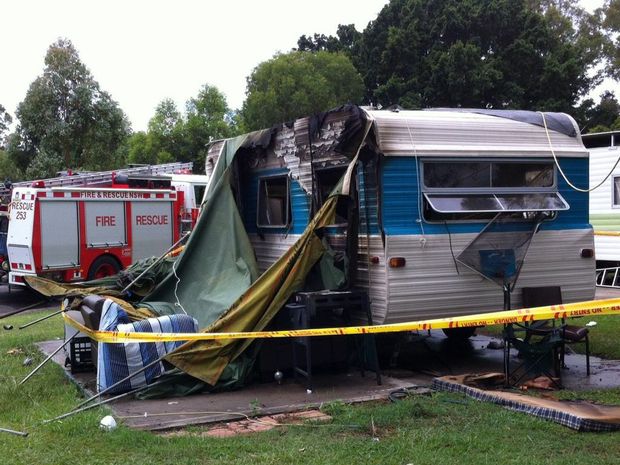 About 11.20am on Monday February 2, a 220 gram butane cylinder exploded ripping through a caravan and annexe at Casino’s Glen Villa Resort.

After being airlifted to Royal Brisbane Hospital’s burns unit, that night the decision was made to turn off 33-year-old Nathan Kliendienst’s life support.

“Compliance certification for all current models of ‘lunchbox’ type gas cookers has been suspended by the independent safety certifiers and cookers of this type can no longer be sold lawfully in NSW,” he said.

“Up to 31 models of butane gas cookers have been withdrawn from sale as they do not meet Australian Standards.

“Retailers in NSW should no longer be stocking or selling these products.”

Mr Stowe said consumers who have purchased cookers should refrain from using them.

“If these products malfunction they can potentially cause serious injuries and I’d encourage people to stop using them,” he said.

“Fair Trading is continuing to work with retailers, manufacturers and other states to ensure products are removed from shelves.

“I’d encourage consumers to notify NSW Fair Trading if they see any devices of this type being sold within stores.”

PHOTO: ‘Lunchbox’ butane cookers when they are bought (above) and below after one failed. (Fair Trading NSW)
MAP: Darwin 0800

People with a type of portable cooker commonly used in cyclone kits and for camping are being warned they may overheat and explode.

The safety warning from New South Wales Fair Trading was issued this week for 31 different “lunchbox” type cookers, which it banned from sale in that state.

“We recommend consumers do not buy portable cookers of this type,” NSW Fair Trading Commissioner Rod Stowe said in a statement.

“Testing, undertaken at the request of NSW Fair Trading and other state gas regulators, has found a fault with the cookers’ shut-off valves, posing a risk that the devices may overheat and could explode.”

The cookers can no longer be sold lawfully in NSW and anyone with the cookers has been warned not to use them.

“If these products malfunction they can potentially cause serious injuries,” Mr Stowe said.

A spokesman at a Bunnings store in Darwin said they began removing the stoves for sale during the week and had also been forced to take them out of cyclone kits they were selling.

He said the butane gas canisters that accompany the stoves were still for sale.

In the Northern Territory product recalls are handled by the Australian Competition and Consumer Commission (ACCC) and on Sunday the gas stoves did not appear in the organisation’s national recalls website.