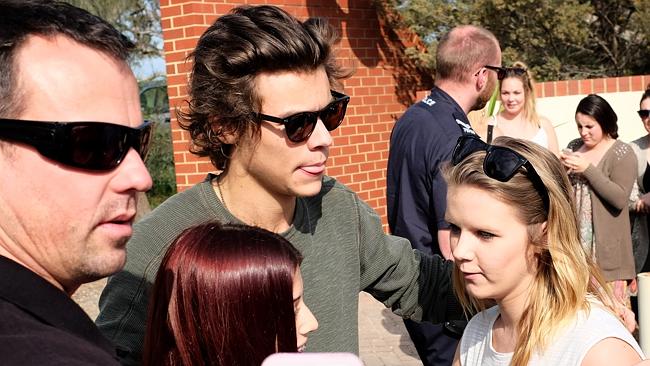 WHAT do Nick Cave and One Direction have in common? They’ve both generated priceless viral tourism promotion for the Barossa Valley.

As 1D members Harry Styles, Niall Horan and Liam Payne thrilled fans with a rare meet and greet outside their Barossa hotel yesterday afternoon, it was revealed One Direction were specially courted to stay in the area as part of its renewed tourism push.

The hugely popular pop group, who arrived last weekend, surprised fans by eschewing city hotels to stay at the Novotel Barossa Valley Resort, one hour’s drive out of Adelaide.

Tourism Barossa regional tourism manager Cathy Wills told The Advertiser the hotel, which has ties to the tourism organisation, had approached the band’s management to negotiate a deal to have the boys stay there.

“The Novotel initiated the proposal because they were aware One Direction were looking for accommodation outside of the inner-city, where they would virtually be in lockdown,” Ms Wills said.

TELL US: Do you think One Direction’s stay has helped SA tourism?

Novotel Barossa general manager Sarah Henderson, a Tourism Barossa board member, would not disclose details of the contract, but said 1D has been the resort’s biggest celebrity guest.

Ms Wills said the band’s visit had boosted the Barossa’s push to increase tourism to the area, generating “priceless” promotion through social media.

“1D has a 16 million combined Twitter followers — so the photos and tweets regarding the Barossa will have an incredible global reach,” she said.

“It would be impossible to put a value on it.”

She said many families had driven to the Barossa to “camp out for a glimpse” after hearing about the band in both social and traditional media.

Ms Whittaker said the value of each tweet depended on the number of followers and retweets, but that One Direction were top of the heap for viral social media activity.

She said the Novotel would stand most to gain from the venture.

“This is invaluable profile-raising for that venue and helps put it on the map for future holiday makers,” she said.

Last year it was revealed the South Australian Tourism Commission paid celebrities such as chef Matt Moran and singer Shannon Noll up to $750 per to tweet promotions of Kangaroo Island.

Yesterday about 30 One Direction fans, who had been patiently waiting outside the Novotel for a glimpse of the band before they drove to their final Adelaide concert, got the shock of their lives when Styles, Horan and Payne emerged and began posing for photos.

Horan later took to Twitter to thank fans for their good behaviour.

Horan later took to Twitter to thank fans for their good behaviour.

“Thanks for being so calm at the hotel! We get t (sic) take pictures with u guys! And the police and hotel security don’t stop it!” he tweeted.

Styles also tweeted his fondness for our fans: “Looking forward to the last Adelaide show tonight, you’ve been amazing so far. Thanks for having us. See you later. x

One Direction played their last Adelaide show at the Entertainment Centre on Thursday, before heading to Perth for two shows this weekend.