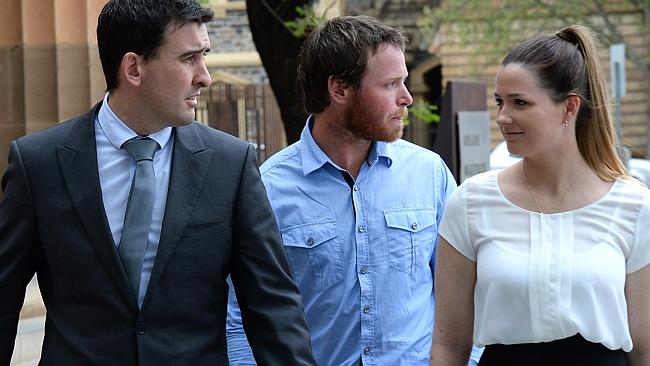 From the Adelaide Advertiser, 5th Sep 2014

TWO staff members from a Kingston hotel have been convicted of serving a drunk footballer who later died in his upstairs room.

Tom Gardner, 32, and Alison Louise Selleck, 21, were this week found guilty of a charge of   at Kingston’s Crown Inn in April 2011.

The pair were charged after the death of footballer Jason Short, who was found dead in his hotel room after winning a “Tap and Fill Award” as best player for his Kingston reserves team.

The award involves the winner’s glass being repeatedly filled by team mates during celebrations.

The court heard Mr Short was obviously intoxicated but Gardner and Selleck had continued to serve him alcohol.

Mt Gambier Magistrate Paul Foley said that witnesses had told the court Mr Short was intoxicated but “not remarkably so”.

Mr Foley said he believed some of the witnesses had downplayed Mr Short’s intoxication when testifying.

“A number of the witnesses gave their evidence so as to minimise the apparent impact alcohol had had on the defendant. Many of the witnesses know the staff and drink at the hotel regularly,” he said.

The court heard an autopsy could not determine exactly when Mr Short died, but that his blood alcohol level would have been between 0.181 per cent and 0.34 per cent.

Mr Foley found that Mr Short also had amounts of the prescription drug Clozapine, which had side effects including sedation seizure and toxic effects on the heart.

“He is seen near the wall apparently unable to stand without swaying and then staggers sideways while attempting to roll a cigarette,” Mr Foley found.

“From at least this time on, the deceased’s balance and coordination is noticeably impaired which remains the case until he passes out after leaving the front bar.”

Defence lawyer Mark Griffin QC told the court Gardner and Selleck should have been acquitted because other patrons also supplied Mr Short with alcohol and that the prescription drugs could have contributed to his death.

However, Mr Foley said the CCTV footage had satisfied him that both Gardner and Selleck had continued to serve Mr Short despite his obvious state of intoxication.

“Ms Selleck was at the front bar serving customers while the deceased was dancing in a disinhibited manner. There is no evidence the deceased did anything to conceal the effect of alcohol consumed by him,” he said.

Mr Foley found beyond reasonable doubt that both Gardner and Selleck were aware that Mr Short’s “balance and coordination at least were noticeably impaired”.

Gardner and Selleck face a maximum penalty of a $20,000 fine and will return to court for sentencing submissions next month.