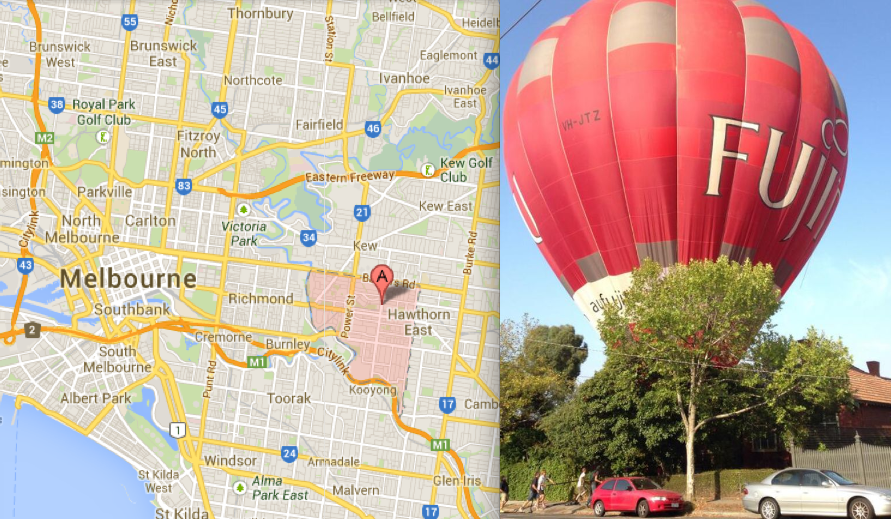 Photo: Hot air balloon lands in a Hawthorn yard – but the tourism operator is claiming the landing was not out of necessity.

A hot air balloon has landed in the front yard of a house in Hawthorn, in Melbourne’s inner east.

The State Emergency Service (SES) had to guide the balloon down between power lines outside the home on Auburn Road to ensure it did not touch the lines as it was deflated.

There were 10 people on board but no-one was injured.

Passenger Tracy Theseria says it was a thrilling ride.

“I would do it in a heartbeat, honestly, yes,” she said.

The owner of the ballooning company, Damien Crock, denies it was an emergency landing.

He says they had been flying for almost two hours and the wind conditions were very light.

“The pilot has decided to land while he’s still got plenty of fuel,” he said.

“Obviously the pilot chose the safest possible thing to do.

“As far as I know at this stage there was no declared emergency, but he has chosen to land there this morning.”

Peter Wright, another spokesman for the ballooning company, says the homeowner was quite excited by the experience.

“I think she was a bit concerned we might damage one of her roses but that all worked out just fine.”