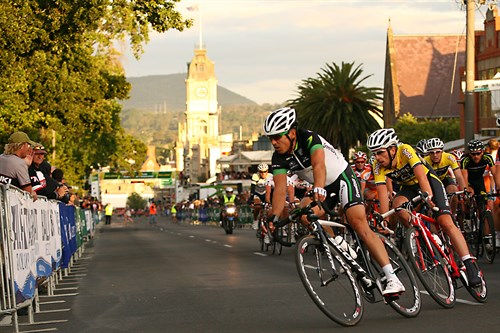 From the Ballarat Courier, 12th January 2014

ANOTHER successful edition of the Cycling Australia Road Nationals has event organisers confident the championships will remain in Ballarat beyond 2017.

Ballarat is contracted to host the nation’s premier cycling event for two more years, with a three-year extension to 2020 yet to be finalised.

“We get these rumours after every year,” Sossi said.

Sossi said attendances had not been affected by indifferent weather from January 7 to 11, with the approximate total of 36,000 over the four days similar to that of the record-breaking 2014 numbers.

Included in the 36,000 were more than 25,000 onlookers for the elite men’s road race on Sunday at Buninyong, with 6000 also turning out for the opening Sturt Street criterium.

Thursday’s individual time trial, well known for its lack of spectator interest, drew around 500 onlookers, while the under-23 and women’s road races on Saturday attracted a healthy crowd of around 4500.

The 2016 edition will mark the 10th straight year Ballarat has hosted the Road Nationals, with the city first securing rights in 2002 shortly before losing it to in Adelaide for a two-year stint.

Sossi said BRT and City of Ballarat officials would wait until the milestone year before “ticking the boxes” for the three-year extension.

Road Nationals race director Scott Sunderland said the level of interest and standard of racing at Ballarat was stronger than ever in recent years, but admitted that change might be a good thing for the championships’ long-term plans.

“We’ve probably maximised the time trial circuit and road race and, for the most part, the locals have been fantastic.

“Change is always good, I don’t think we can make a change just for the sake of it, but if we can find another set of courses (in the long-term future), then yeah, why not look at it?”

By Sunderland’s reckoning, there has only ever been preliminary interest in a potential move of the nationals.

“There’s quite a few people who have had interest (for post 2017), but it’s a long way to go past that and there’s a lot of work to do to get past the interest stage,” he said.

“I haven’t spoken to Nick Green (Cycling Australia CEO) about it, but maybe having the nationals in one city for three years at a time is something to look at going forward.”

Sunderland also said the revamped time trial course had earned competitors’ approval, while the rescheduling of the criterium to Wednesday saw more road racers enter than in previous years.