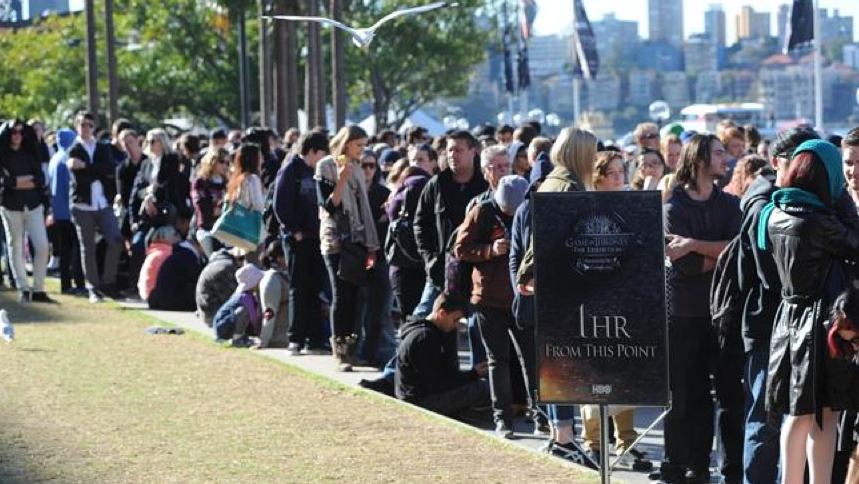 TTN: There’s been no word of apology from organisers to the thousands of Game of Thrones fans who were kept waiting for hours in freezing conditions for an exhibit in Sydney. The exhibit’s American parent, HBO, has a website dedicated to the travelling roadshow, so the network, along with the MCA venue, had plenty of tools available to estimate crowds numbers.

‘Thrones’ Fans Furious at Being Turned Away From Exhibition

From pop culture online magazine Pedestrian, 5th July 2014
The temporary Game Of Thrones exhibition at Sydney’s Museum of Contemporary Art has already made headlines thanks to crazily long lines of fans, desperate to get a whiff of Jon Snow‘s musty winter leathers and various other props from the show.
Today is the last day of the five-day only free exhibit, and as expected, the lines outside are utter pandemonium. By mid-morning, fans who had already lined up for several hours were being turned away by security.
Furious Thrones fans, thwarted in their attempts to take selfies next to Sansa‘s gold wedding dress, have taken to Twitter to vent their anger at the event’s organisers, at HBO, and at the vast, cold universe that betrayed them so badly.
Some are deeply frustrated and out for vengeance, Arya Stark-style:

Some told tragic, Rains of Castamere-like tales of people who cut in line and got in ahead of them, dammit:

Some, who traveled great distances for the event, traipsing all over the place like Podrick and Brienne, were especially put out:

Some are still holding out hope, rather like the Khaleesi‘s faith that her dragons are essentially good people and not, y’know, mindless killing machines: 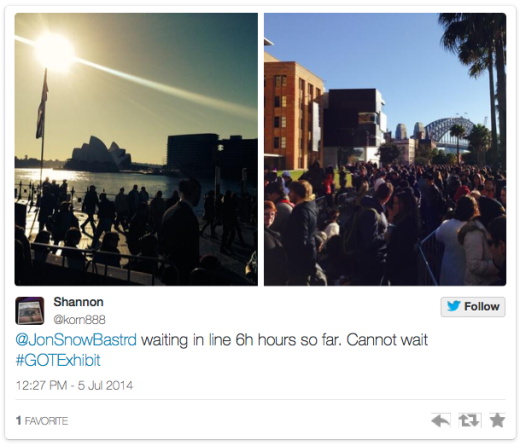 Those lucky few who got in managed to smugly snap pics of themselves on the Goddamn Iron Throne: 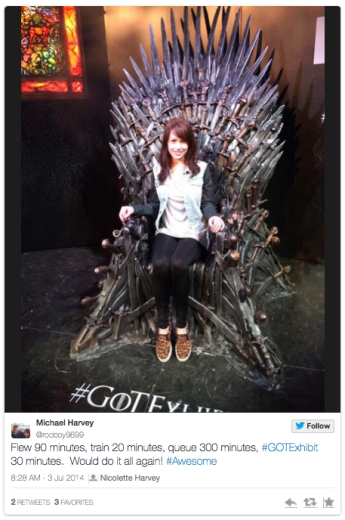 The exhibit closes at 8pm tonight, and much like a Wildling attack, it will depart from Sydney as quickly and confusingly as it arrived, leaving a lot of carnage and weeping villagers in its wake.