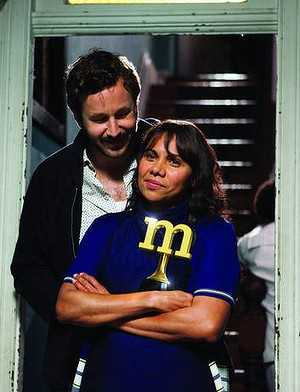 JUST weeks after The Sapphires swept the field in a feelgood ceremony at The Star in Sydney the AACTA awards – Australia’s equivalent of the Oscars – face a financial crisis that threatens their very existence.

The loss of a major sponsor late last year sparked a funding shortage that has led the organisation to shed almost half its staff in the past few months and put in doubt its ability to continue without additional industry or government support beyond next year’s event.

”We’ve having ongoing difficulties raising the sort of support that’s required, and that has led to a need to restructure,” CEO Damian Trewhella told Fairfax Media on Monday. He added that the organisation was actively seeking new corporate sponsors but also called on the government funding agency, Screen Australia, to increase its support of the event.

The Australian Academy of Cinema and Television Arts awards were born in late 2011 out of the AFI Awards in a bid to raise the profile of the local industry and to muscle in on the global awards season that culminates in February with the Academy Awards.

With a high-profile Academy president in Geoffrey Rush and top-line talent including Nicole Kidman, Cate Blanchett and Russell Crowe all participating, the second AACTA awards ceremony, held on January 30, appeared to be on the right path. Though the five-city overnight audience for the 9.30pm broadcast on Ten averaged just 318,000 viewers, that was better than last year on Nine and, the AFI claims, a five-year high.

However, the event was almost derailed by the loss in September 2012 of major corporate sponsor Samsung, whose commitment was believed to have been worth about $1.5 million annually to the event. The late withdrawal of host Hugh Sheridan just a week out from the telecast could have been another blow, but Crowe stepped in at the last moment and delivered a superb performance that gave no hint of the problems behind the scenes.

”It’s quite remarkable the event went ahead at all,” Trewhella confessed to Fairfax Media.

The 2012 AACTA Awards cost about $5 million to mount. This year’s event was put together for around $3 million, an amount that is insufficient to sustain the awards on an ongoing basis.

”It looks like we have to run this on a project by project basis,” Trewhella said. ”We’re taking a lot of pain at the moment.”

The Australian Film Institute was, for a time, one of the premier cultural institutions in the country, running cinemas, a short-film distribution program and a major research library in addition to the industry’s annual awards ceremony. But from the late 1990s, it has been a fading entity. The cinemas and library were offloaded, and the distribution and exhibition program abandoned as a reduction of government funding forced it to concentrate almost exclusively on the awards.

Now, even that is uncertain. While next year’s ceremony is all but guaranteed thanks to the support of Destination NSW, which tipped in about $1 million a year over three years to prise the event away from Melbourne, what happens when that deal expires in 2014 is far from clear.

”This is now a period of review and rationalisation,” said Trewhella. ”If we’re going to be able to do this we need to reset the priorities. There’s been a rush to acknowledge box office and ratings success and that’s important but it’s reductionist. We need a commitment to underwrite an event that celebrates excellence in our industry.”