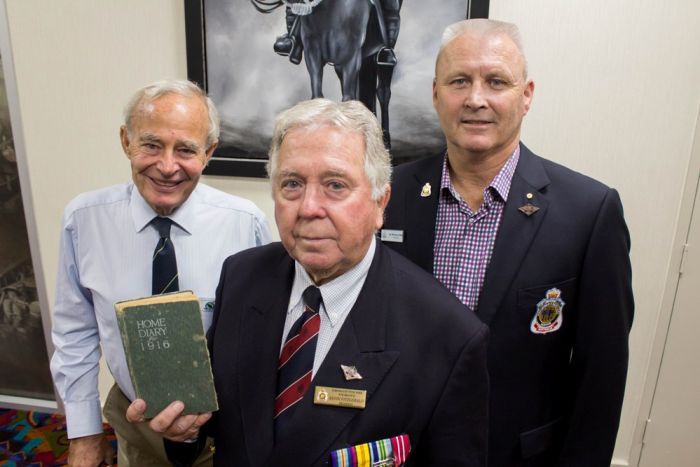 The Foot family sent four boys off to the First World War, but only two came home. Now 100 years later one of their diaries has returned to north Queensland, after being discovered in a Brisbane RSL.

Private George Pierce Foot was the third brother to go to Gallipoli, enlisting on the same day his elder brother Henry was killed during battle.

The diary was unearthed at the Yeronga Dutton Park RSL last year, during a review of their memorabilia.

It was a mystery for RSL president Kevin Fitzgerald who had no idea when or how they came to have the diary in their collection.

“No-one knew the gentleman concerned, no-one knew if he came from the area, no-one knew how we came across the diary,” Mr Fitzgerald said.

With the centenary approaching the RSL decided to track down the owner, eventually finding his name in war records in Canberra.

They then managed to contact George’s nephew Lux Foot and the diary will now go on display in Townsville RSL.

“[The family] were very pleased to hear [about the diary],” Mr Fitzgerald said.

“I don’t think they knew very much of the history of the Foot family in the First World War.

“The contribution that they made, out of five boys, two were killed, one was seriously injured … they have really contributed to the history of Australia.

“I’m pleased to be able to return it to Townsville.”

The Foot brothers hailed from Cardington Station, a cattle property near Charters Towers in north Queensland.

On his enlistment papers, 29-year-old George wrote “bushman” as his occupation.

His brothers Henry and Alex were both killed at Gallipoli in 1915.

George served there briefly before being transferred to Egypt.

Their younger brother served towards the end of the war, while the family’s youngest was not old enough to fight.

Bill Muller, the archivist at Townsville Grammar School, where all five boys were educated, has researched the diary.

“The diary has a lot about his time in Egypt,” Mr Muller said.

“What they were doing, including swimming across the Suez Canal and training the horses, [because they were] in the fifth light horse.

“Part of the diary is talking about the cattle on the property, it’s not all about the war itself.

“Then I think it was September 16 of 1916 he was wounded and spent the rest of the time in hospital.”

In January 1917 George was sent home to Australia.

Making friends from across the world

While his writings are not long and detailed, George’s diary shows the bonds made between soldiers of all nationalities.

“One of the pages he writes down all his friends and their addresses and it’s quite interesting because [they come from] Rhodesia, England, South Africa,” Mr Muller said.

“These are people that he met, so it showed you that it was an all encompassing sort of conflict.”

While the memory of the Foot brothers is now cemented in north Queensland, Bill cannot find out what happened to George after the war.

He assumes he returned to the property but can not be sure.

The remaining family members have agreed to leave the diary on display at the Townsville RSL.

Townsville RSL president Bill Whitburn is happy to take on the responsibility.

“It’s a significant artefact,” he said.

“It’s important that we maintain those linkages from World War I and this is an ideal opportunity for us to cherish that moment.”