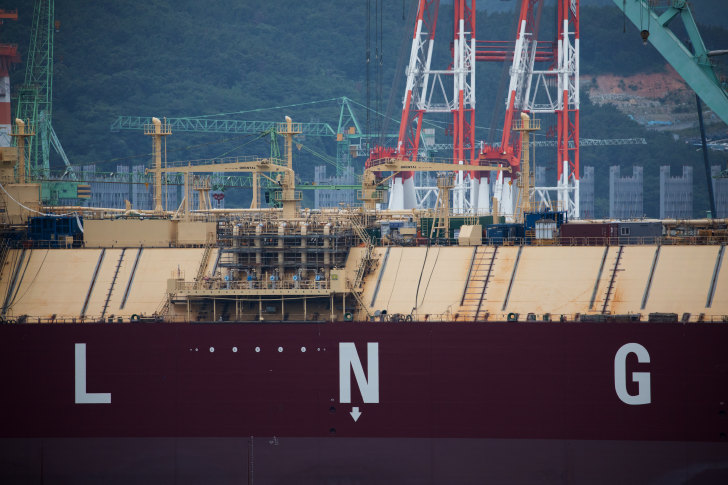 Experts and energy analysts say Australia’s gas sector can do nothing if Moscow were to cut off Russian gas supplies to Europe. This comes as the PM said Australia “stands ready to support its friends and allies” with extra gas supplies.

Related Community: Is there still a bipartisan consensus on standing up to China?

The nation’s biggest gas exporters are poised to cash in from soaring prices if war breaks out in Ukraine and disrupts supplies from Russia, but analysts warn there is “precisely zero” capacity for Australia to boost deliveries to Europe.

After the Morrison government last month said Australia “stands ready to support its friends and allies” with extra gas supplies, Foreign Minister Marise Payne on Wednesday said she had been in talks with European counterparts about potentially providing cargoes of liquefied natural gas (LNG) to avert any threat of a shortfall in Europe.

However, experts and energy analysts say Australia’s gas sector can do nothing to save Europe from a near-term energy crunch if Moscow were to cut off Russian gas that accounts for more than one-third of Europe’s needs.

“Global LNG supply is a zero-sum game in the short term, so any cargo diverted to Europe would just leave Asian demand short,” said Saul Kavonic, an analyst at Credit Suisse.

“Australia will sell its uncontracted LNG cargoes to the highest bidder, but won’t ultimately be able to produce any more LNG near term than was otherwise already the plan.”

Graeme Bethune, chief executive of Adelaide-based consultancy EnergyQuest, said prices in Europe would need to be $US2-$US3 higher than North Asia to make it commercially worthwhile for Australian LNG to travel that distance.

“Another issue is Australian LNG is produced by private companies, and the government doesn’t decide where it goes,” Dr Bethune said.

Tight global LNG supplies colliding with a sharp rebound in energy demand following the downturn caused by the COVID-19 pandemic last year have sent prices for one-off shipments of the super-chilled fuel on the spot market to all-time highs and they remain elevated above $US25 per million British thermal units today.

In the possible but unlikely event of an “extreme” scenario whereby a major gas crunch develops in Europe, Credit Suisse said prices for uncontracted LNG cargoes would also rise in Asia and may nearly double the previous record and reach as high as $US100 per million British thermal units.

Woodside Petroleum, the largest Australian oil and gas company, stands to benefit most from the higher-price environment because it has more uncontracted cargoes to sell compared to the nation’s other major producers.

“Woodside has emerged with among the strongest upside exposure to any European gas crunch of companies in the region, with around 2 million tonnes of LNG – or 20-25 per cent of LNG production – linked to European gas or spot LNG prices,” Mr Kavonic said.

While the prospect of a worsening energy crunch in Europe will drive higher sales revenue across the world, Mr Kavonic said the only spare capacity in the system that could be diverted to Europe was likely to be in Qatar. Australia’s producers, which must also supply east-coast gas users, were already running volumes as hard as possible and sending any surplus cargoes to existing buyers in Asia.

“To be clear, Australia’s LNG industry will provide precisely zero assistance beyond what they would otherwise do in the event Russian gas supply to Europe,” he said.

After Russia deployed troops into breakaway regions of Ukraine this week, global oil prices have climbed above $US95 a barrel for the first time since 2014.

Karoon Energy, an Australian-listed oil producer which operates an oil field off the coast of Brazil, on Wednesday reported a 700 per cent surge in half-year sales revenue to $US186 million after its average realised oil price rose to $US72.43 in the six months to December 31.

Chief executive Julian Fowles said the Russia-Ukraine conflict would have “knock-on effects” into parts of Europe that may keep oil prices elevated, at the same time as demand was rebounding from road, sea and air transport.

“Conflict is bad – bad on so many fronts,” Dr Fowles said. “I wish we had a lot more geopolitical stability, of course. But, certainly, we’re in a position to be able to benefit from higher oil prices.”

Commonwealth Bank analyst Vivek Dhar said there was a “considerable risk” that oil prices may surge above $US100 a barrel if Russia’s invasion in Ukraine continues to escalate.” Oil markets are particularly vulnerable at the moment.”
Share Tweet
Previous Post Could cost of living pressures delay rate rise?
Next Post Lismore locals rescued by Fijian workers