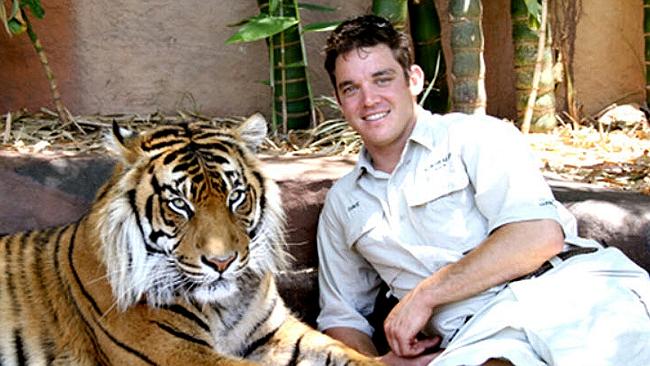 THE tiger that attacked an experienced cat handler at Australia Zoo on Tuesday had been raised by him since it was a cub.

Shocked witnesses told of seeing Dave Styles grabbed and dragged into the pool inside the tiger enclosure just after the daily show while he was apparently wrestling with the animal.

During the attack Mr Styles – who has worked with big cats since 2005 – was bitten on the neck while in the water, suffering several puncture wounds near vital blood vessels and significant blood loss.

Last night he was in Royal Brisbane Hospital in a stable condition after being flown from the Sunshine Coast by the RACQ CareFlight rescue helicopter.

Witness Carly Fritsch, of the Gold Coast, said the cat seemed to being trying to keep the man in the water after its initial grab at him.

A man was bitten in the neck by a resident tiger at Australia Zoo. Courtesy: Ten Eyewitness News

“(The trainer) was wrestling with one of the tigers and it suddenly grabbed his shoulders and lunged at his neck,” she said, adding other zoo workers quickly came to the rescue.

Witness Jake D’Olimpio, 14, from Perth said perhaps four other workers physically fought to separate the pair in the water. “One of them was hitting it with a stick,” Jake said. About half the crowd from the scheduled tiger show had lingered after its end to watch some more action as trainers played with the big cats – an event which was being filmed for the BBC. Director of Australia Zoo Wes Mannion said the senior tiger handler had raised the male tiger since it arrived at Australia Zoo as a cub.

Australia Zoo would not reveal which tiger was responsible. “Our priority is the well-being of the handler, who is a valued member of our Australia Zoo family,” Mr Mannion said. “At the time of the incident, our emergency response team were on the scene immediately. They acted professionally and calmly. My hat goes off to them”.

Mr Styles has been working with tigers since 2005 after making the switch from marine mammals.