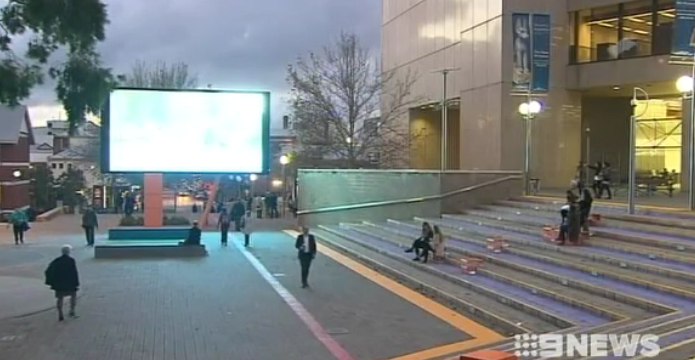 PICTURE: The Perth Cultural Centre
TTN: An unprovoked assault on four tourists to Perth – two Swedes and two Kiwis – was left underreported by WA media. The four were set upon by up to eight people. It was not reported from which venue or suburb the assailants emerged before the attack outside the Perth Cultural Centre, raising questions about whether the attack was alcohol-related.

THREE people are being questioned over a gang attack on four tourists in Northbridge last night, which police believe was racially motivated.

Two of the tourists, a Swedish couple aged 35 and 22, had only arrived in Perth yesterday, a few hours before they were attacked.

The Swedes and a New Zealand couple, were assaulted about 9.30pm in the Perth Cultural Centre near James Street.

The Swedish couple was taken to Sir Charles Gardiner Hospital for treatment for head and facial injuries.

The New Zealand pair, a 31-year-old woman and a 27-year-old man, received minor injuries in the assault and were treated at the scene.

There are reports that the 27-year-old New Zealand man was approached as he walked to his hostel last night and he was asked for a cigarette, but when he declined, he was set upon.

This afternoon Perth City Detectives revealed they were interviewing a man and two women in relation to the attack.

It’s believed the couples were assaulted by up to eight people, six men and two women.

“One of the male offenders was not wearing a top during the incident,” a police spokeswoman said.

“The offenders used offensive and racially motivated language towards the victims.”

City of Perth acting lord mayor Janet Davidson said: “It is always disturbing to hear of tourists, or anyone else, being assaulted in the city.”

“The circumstances of Monday night’s incident are for the police to investigate and establish.

“All cities are subject to violence, but by international standards Perth is a relatively safe city and remains very popular with tourists.

“Safety and security is a priority for the City of Perth. We maintain a network of CCTV cameras and will supply any footage to the police to assist with their investigations.”

Anyone with any information about the incident is urged to call Crime Stoppers on 1800 333 000.

A proposal to use underage police cadets for stings on liquor outlets has been rejected by Colin Barnett as “entrapment”, even though similar powers are available to target irresponsible cigarette vendors.

Police say they need to crack down on alcohol sales to juveniles after a recent licensing enforcement division operation found more than seven out of 10 outlets sold teenage cadets alcohol without checking their age.

They want the power to use minors for tests on takeaway alcohol retailers but the Premier said yesterday the Government would not allow it.

“What the Government will not accept is entrapment, using people under 18 to go into venues,” Mr Barnett said. “I’ve made it very clear to the Commissioner and, in fact, it would be illegal.”

He said Mr Barnett had pre-empted the outcome of the Liquor Control Act review and the Health Department had power to use juveniles in similar stings on cigarette vendors under the Tobacco Products Control Act.

“It is hard to understand why it’s OK for tobacco, but not for alcohol, when binge drinking is cause for so much concern,” Professor Daube said.

Police Commissioner Karl O’Callaghan said legislation was a matter for the Government but without the ability to make test purchases, police had to do intensive surveillance work to try to catch irresponsible outlets.

He said a team of officers might need to wait outside one premises for several hours for something to happen, while other venues went unchecked. In the same time, a police cadet could do test purchases at several stores.

Police spend 60 per cent of their time dealing with alcohol-related problems.

Enforcement, education and cultural change were some ways of dealing with youths’ determined drunkenness, Mr O’Callaghan said. “If we want to stop young people getting access to liquor, we are going to have to enforce the law stronger,” he said.

Liquor industry groups have said takeaway alcohol retailers had to be vigilant in checking proof of age but the 2011 Australian School Student Alcohol and Drug Survey report found only a small percentage of WA children aged 12 to 17 acquired alcohol directly from liquor outlets and most was supplied by relatives or friends.

No interaction. No dispute. Just a punch that floored Matthew Blackmore

One minute he was walking down George Street in the CBD.

The next he was on the footpath with a broken nose and fractured vertebrae.

Police have released CCTV footage of a group of five “thugs” who attacked 33-year-old finance worker Matthew Blackmore as he was waiting for a taxi home on Saturday night.

Perhaps most chilling is the fact officers have yet to establish any motive.

“There was no interaction. There was no dispute between them. It just happened,” he said.

Matthew Blackmore, pictured here nursing his niece, is recovering in hospital after being king hit on George Street in Sydney’s CBD. Photo: Supplied

“At this stage we’re relying on the public to come forward. There were a lot of people around so someone should have seen something.”

After being placed in an induced coma on Sunday, Mr Blackmore was moved out of St Vincent’s Hospital’s intensive care unit on Monday morning and was “awake but very sore,” his brother, Mark, said.

Police released CCTV footage showing the group of men running across the road near Park Street in front of Mr Blackmore before one of the men heads back towards him.

The man is then seen punching Mr Blackmore in the head, causing him to fall forward and smash his face into the footpath.

Mark Blackmore said his brother was lucky to be alive and he praised the work of kind strangers.

“Although these thugs did this to my brother, it was good to see on the footage total strangers … going to his aid,” he said.

Mr Blackmore, 33, had left a work function and was looking for a taxi alone on the busy street in central Sydney about 12.20am.

His brother Mark and sister Karen made an emotional plea on Sunday for witnesses to the “unfathomable” act to come forward.

Karen Blackmore said her brother, a finance worker who lives in Maroubra, rarely went out in the city and preferred quiet nights in, or at a nearby pub, with his partner, Melinda.

“I think he’s shocked. He had no clue because he doesn’t remember anything,” Ms Blackmore said.

“He was literally walking along with his hands by his side. He’s going to make a full recovery and he’s one of the lucky ones.”

Mark Blackmore said he was “sick of looking on the news each day and seeing these thuggeries happening on our streets.

“Barry O’Farrell needs to convene a high-level meeting between police, health experts and the industry where everyone can speak as equals,” he said.

“Significant progress has been made by strengthening the power of police in the area, strengthening the regulation of licensed venues and improving late-night transport and creating safer public spaces in the Kings Cross and CBD entertainment districts,” he said.