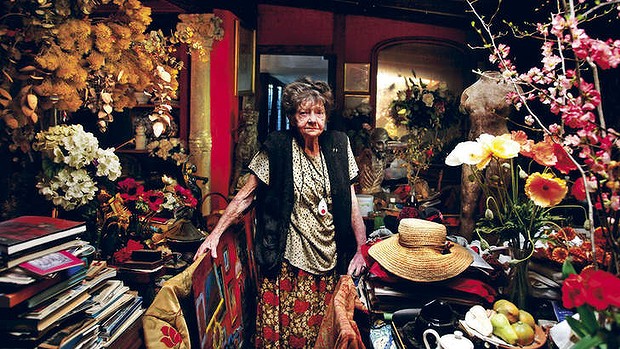 Moving house is never easy, but packing up the contents of Margaret Olley’s Paddington home and transporting them to a new exhibition space at the Tweed Regional Gallery in Murwillumbah was always going to be an arduous task.

”She didn’t like to throw things out,” said project co-ordinator Sally Watterson, who led the packing up of an estimated 21,000 objects from the artist’s home, 90 per cent of which are exhibited in the gallery’s Margaret Olley Art Centre.

”I was alone for a lot of that time because we couldn’t physically fit anyone else in.”

Visitors will be able to peer inside original windows and doors to view the eclectic assortment of belongings. Photo: Steven Siewert

Ms Watterson spent 12 months cataloguing, packing and transporting the contents of Olley’s home to the gallery in northern NSW, where it will be re-created in the centre.

”It was very densely populated with large and small objects,” she said. ”And, being an old hat factory, it had quite unusual spaces.”

In contrast, the unpacking and placement of items inside the new wing of the gallery has taken only a few weeks.

The artist and benefactor, who died in July 2011, expressed a wish to have her studio and elements of her home and collections recreated in the area where she spent her childhood, said one of her trustees, Philip Bacon.

The $4 million Margaret Olley Art Centre recreates her studio, parts of her Paddington home and part of her art collection. The centre also houses an artist-in-residence studio, whose inaugural occupant will be sculptor Alex Seton.

The re-creation of the hat factory, the yellow room and the green kitchen is fastidious, right down to the flowers and fruit that dotted Olley’s house, the ceramics she collected and even the patina of age on her most cherished items.

Visitors will be able to peer inside original windows and doors to view the eclectic assortment of belongings Olley kept in her cluttered and colourful home.

The gallery’s director, Susi Muddiman, said the centre also re-created the light that ”Olley chased around the house” and the lingering smell of oil paints and cigarette smoke in the fixtures and furnishings.

”There’s a spooky kind of aroma around the place,” Ms Muddiman said. ”With the wooden frames and so on, cigarette smoke has permeated into that joinery.”

”Seeing these collections and arrangements in her home studio, you then can look at her work with a deeper understanding of all those ingredients she used to create her artwork.”

The Margaret Olley Art Centre will be opened on March 15.