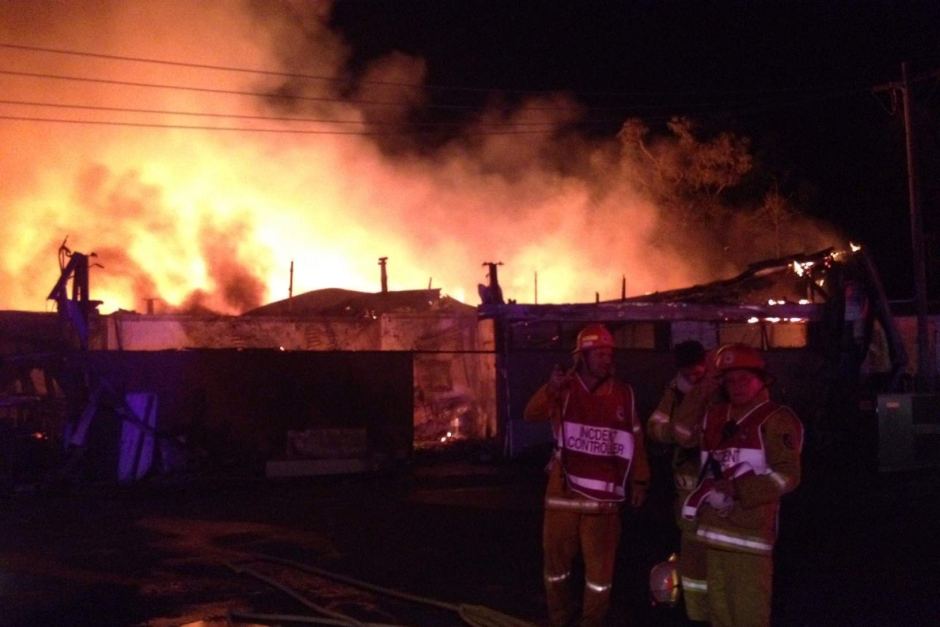 Investigators have not ruled out arson as the cause of a fire that severely damaged the former Old Sydney Town complex on the New South Wales central coast overnight.

Crews from Fire and Rescue NSW and the Rural Fire Service (RFS) were called to the site at Somersby about 3.30am (AEDT).

By the time they arrived the main administration building was well alight and it took crews nearly four hours to contain the blaze.

Police say a caretaker who was asleep at the site then the fire began was not injured.

RFS spokesman Joel Kursawe says the investigation into what caused the fire will begin in earnest this afternoon.

“The fire has only been extinguished in the last couple of hours so once they begin that investigation they will be looking at all avenues,” he said.

“That building has been approximately 80 per cent destroyed. It is believed to have housed some old horse and carts and some old memorabilia that has been stored at the site over the years.

“We had more than eight trucks and 40 firefighters there this morning. This is certainly a large response for a fire at this time of the morning.”

The full extent of damage to the items being stored in the building is not yet apparent.

Millions visited Old Sydney Town during its operation from 1975 until 2003.

The heritage theme park sought to recreate the early years of European settlement in Sydney.

A campaign to re-open the site has been active on social media, though questions have been raised about the economic viability of the venture. An artist’s impression of how the big Buddha would look. Source: Supplied

A GIANT gold Buddha would be the centrepiece of an $80 million temple being considered for Warnervale on the Central Coast as part of a proposed $500 million Chinese theme park.

Originally planned to open in mid-2015, plans for the cultural centre on vacant bushland have been brought forward, with construction to begin as early as December this year.

These artist’s impressions of the temple show the giant Buddha in a forecourt surrounded by 8500sq/m of Chinese-inspired architecture. An artist’s impression of the Warnervale temple. Source: Supplied

Wyong Shire Mayor Doug Eaton is in Guangzhou, China, gathering support for the project, which he said would transform the coast into a “tourist haven”.

Late last month Mr Eaton attended the Shanghai launch of the temple, the first stage of the 15ha site, which will include six other themed sections. An artist’s impression of the temple section. Source: Supplied

hese include the China City Gate, a replica of the gates to the Forbidden City, Tang and Song Academy, Water Towns of South China, Wyong Theatre, Royal Villa and Panda Paradise, which will feature a 4D cinema display but no real pandas.

Mr Eaton said via email yesterday the plans were yet to receive development approval but “we expect it soon”.

“The temple is the first stage and we expect to approve it in stages,” he said.

“My understanding is that the temple is of the order of $80m (million) or so. An artist’s impression of the theme park with the Buddha at its centre. Source: Supplied

“It will be the only major man-made attraction on the coast so it will revitalise our tourist industry and give a significant boost to our local economy and local jobs.”

A council spokesman said the temple would be called “Gan En”, which means “thanks”. Along with the replica of the gates to the Forbidden City and a nine-story pagoda, it would be visible from the M1 freeway.

The park is being bankrolled by Chinese investors and the Shanghai Government, which have formed the Australian Chinese Theme Park (ACTP) Pty Ltd.

Mr Eaton said the ACTP president told the launch the theme park would become “world famous and rank only behind the Opera House and Harbour Bridge as Sydney’s great tourist attractions”.

TTN: This article was a small research piece commissioned by the Tourism News in 2012, when the significant investment by a Chinese company was noted in context with other controversial investments in Australian property by Chinese government.

The “unbeatable Australian environment” combined with the “most wonderful parts of China” will become the basis for the proposed development of a China theme park on the central coast, north of Sydney.

For years, China has asserted itself as Australia’s most important trading partner, investing in key industries. The country is vital to our future prosperity. Now China has directly aligned itself with the tourism sector.

“There are lots of benefits in Chinese tourism,” said Amanda Li, Secretary General of Australian Chinese Theme Park Pty Ltd (ACTP), the company behind the development.

“China is so big, people cannot travel all around the country. But the China theme park will contain the most wonderful parts of China with the unbeatable Australian environment. This unique and novel project definitely will attract Chinese tourists and, of course, tourists from all over the world.”

Recently formed, the ACTP has been “established specifically for this project”, securing the rights to a $10 million, 15.7 hectare parcel of land in Warnervale from the Wyong Shire Council.

Purchased by the council in 1977 for $30,000 the sale of the land to the ACTP, an “Australian company overseen by all Australian board members”, marks the end of Wyong Shire’s involvement with the project.

Mixed reactions from locals to the proposed Chinese cultural theme park have conflicted with the council’s motivation of money, jobs and investment. Opposition has been somewhat negated, though, by promoting a boom of 500 direct jobs during construction and 1,000 jobs post-completion anticipated for the Central Coast.

But there are questions over the potential for success, even though the council remain adamant that it will appeal to many people, including those travelling to or from the Hunter Valley.

Despite recent suggestions, the Wyong Shire Council have assured their ratepayers that they are not “footing the bill.” Ratepayers will “actually benefit out of the deal courtesy of the significant profit of the $10 million sale of Council land.” It is the ACTP who is “financing the deal, not Council.”

The ACTP will submit a “normal” Development Application “just like any other developer wishing to invest in the Shire, although it is currently “early days.”

Plans to begin building are scheduled for 2015, with completion of the seven uniquely themed sections reflecting Chinese life and culture targeted for 2020. The $500 million committed to the project by ACTP consist of funds “from private companies in China.”

According to Wyong Mayor Doug Eaton, the theme park will have the capacity to “put Wyong onto a major world stage.” The area is slated to become a tourist mecca and bring millions of dollars of tourism into the area, which will benefit the whole region’s economy.

Regardless, there is some speculation regarding the Chinese Government’s motivation to “build a mini Chinatown in Australia.” But since interest rates have dropped, Chinese investors have been buying real estate in other countries, and “Australia is easy pickings for them.”

China, home to over a billion people, has confronted many challenges in its fight to become a developed nation. Its development has been unprecedented in speed which has resulted in a smooth transition. The country’s latest bid for an economic stronghold in Australia is based on a long-term, resource-hungry view.

The ACTP is supported by the Australia China Foundation Association (ACFA), a non-profit, bi-national organisation dedicated to trade and investment opportunities between Australia and China.