Are you ready to go viral with that policy? 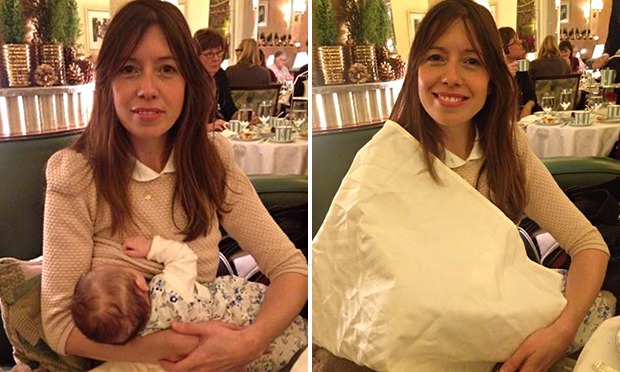 Louise Burns breastfeeding her baby, and with the napkin she was told to wear by Claridge’s. Photograph: @andysrelation/Twitter

TTN: Claridge’s Hotel in London has suffered embarrassment over an unintentional, but ignorant breastfeeding policy.

The incident is reminiscent of the viral explosion that took place after the owner of Newcastle, NSW’s ‘Little French Cafe’ complained that unruly children were not welcome in the cafe. The incidents beg the question – would all your policies stand up to world scrutiny?

Claridge’s hotel criticised after telling breastfeeding woman to cover up

A woman has described how she felt humiliated after being asked to cover up while breastfeeding at Claridge’s, the luxury hotel in London.

Louise Burns, 35, who tweeted pictures of herself and her 12-week-old baby, said she was having a Christmas tea treat at the hotel with her mother and sister when her infant needed feeding.
“I started feeding her very discreetly when the waiter hurried over with a huge napkin, knelt down and said it was policy to cover up,” she told the Guardian. “My initial reaction was to burst into tears. This was my third baby. I had trouble breastfeeding the first two but this was going well. I didn’t expect to be admonished in a central London hotel.”

Burns, from Streatham, south London, who worked in financial services, said she felt very awkward and wanted to leave, but her mother and sister had come from the Midlands for their Christmas treat at Claridge’s at some expense, something they had liked doing for the past few years.

She said the waiter was polite, as was a supervisor who was very apologetic but stated that it was hotel policy for mothers to cover up while breastfeeding.
“By then I had calmed down, but I felt so humiliated. I was being so discreet. No one should be made to feel like that in this day and age, especially when mothers are under pressure to breastfeed.”

On its website, the NHS says: “You shouldn’t ever be made to feel uncomfortable about breastfeeding in public. In fact, the Equality Act 2010 has made it illegal for anyone to ask a breastfeeding woman to leave a public place such as a cafe, shop or public transport.”

The Mumsnet website is also emphatic on the right to breastfeed in public: “Remember, it’s not illegal or immoral to breastfeed your baby in public and in many countries, including Scotland, it’s your legal right to be left to do so in peace. It is important you feel comfortable and happy feeding your baby.

“Try to develop a thick skin … Remind yourself that what you’re doing is a completely natural part of being a mum. Remember, most people won’t bat an eyelid and will let you feed your baby in peace.”

A Claridge’s spokeswoman declined to discuss the incident, but said it did allow breastfeeding. “It is our policy never to talk about our guests,” she said.

Burns said the hotel did offer a £75 discount and the supervisor expressed the hope that she would come again. But she tweeted: “Such a shame I can never go back.”

She said she was not carrying out a big crusade, but wanted an apology. “It was a Christmas treat. No one should be made to feel like that.”

Burns, whose husband Nick is an actor known for playing the comic character Nathan Barley, has received many messages of support.

One tweeter wrote: “You are absolutely right. They shouldn’t have made you feed in a way you didn’t want to, it’s illegal.”

— Tooting Baby (@Tootingbaby)
December 1, 2014
.@Andysrelation you are absolutely right.They shldn’t have made you feed in a way you didn’t want to, it’s illegal: http://t.co/HqGAfBUxK2

Another said: “How can the sight of mother feeding her child do anything else than make people feel good! @ClaridgesHotel apologies needed.”

Lucy Bunting said: “Under the 2010 discrimination act, asking a bf’ing mother to cover up is illegal and disgusting behaviour!!! This is clearly their policy not just a rogue member of staff! Even more unacceptable!”

Another tweeter, @rosedeirdre, wrote: “It’s sad, because it’s the first a woman will do, to create a bond with & nourish baby & shamed 4 it.”

A Guardian commenter, Gré Tee, said: “I just don’t understand why this is still an issue in 2014? This is a woman breastfeeding, seriously, if it ‘puts you off’ your food, it is absolutely OK not to look.

“I am just completely amazed by the lack of empathy in some people … it is not always possible to manage feeding times when it suits absolutely everyone in the mother’s environment … Could we just all get over it and stop acting like this is some sort of shameful thing that we need to cover up???”

Others criticised the hotel. “Shame on you Claridge’s: asked to cover up while #breastfeeding so not to cause offence,” tweeted Zoe Crawford, while @berrykirei said: “Something human & natural made 2 look shameful, apology not good enough.”

Travelodge Hotels said it “had no policy whatsoever about breastfeeding” and that their customers can breastfeed their children “as and when they like”.

The NHS points out that breastfeeding is the healthiest way to feed a baby and it recommends feeding a baby only breast milk for around the first six months. After that, it advises giving breast milk alongside other food to help the baby continue to grow and develop.