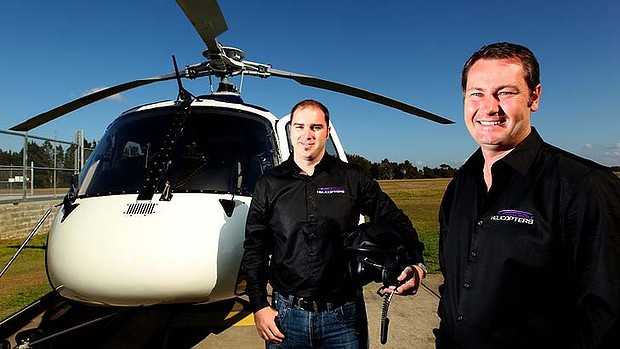 PHOTO: Newcastle Helicopters directors Mitch Campbell and James Guest.
TTN: BEFORE NSW Helicopters felt the wrath of Sydney’s harbourside councils and residents’ associations, they’d had a simple conversation with a public servant, floating the idea of a helipad on Sydney Harbour. A story detailing the NSW government’s involvement has been withdrawn from the Sydney Morning Herald.

SYDNEY’S proposed floating helipad will be in the middle of the harbour, servicing up to eight flights an hour, it was revealed at an explosive meeting in North Sydney on Monday night.

The barge, which will carry two helipads, has already been approved by the state government and has a 12-month licence. It will be 37 metres long and 12 metres wide and be situated about 500 metres east of Fort Denison and 600 metres from the closest residence, the meeting heard.

Each helipad has the capability to service four ”quiet technology” helicopters an hour, the owner of Newcastle Helicopters, James Guest, told the packed meeting at the North Sydney Council chambers.

An artist’s impression of the proposed helipad for Sydney Harbour.

But residents were irate. They demanded to be told why they had not been consulted and how it would affect their suburbs.

The mayor of North Sydney, Jilly Gibson, told the jeering audience she had only been informed of the plan three weeks ago, while many of the residents had only been told in recent days.

There were calls for government inquiries and noise demonstrations, other residents saying the helipad would only service ”cashed-up clients of the casino” and that ”it would destroy the livability of Sydney”.

One resident, Leigh Fincke, from Cremorne, asked what they could do to stop the helipad, saying the harbour had enough tourist attractions. Kirribilli resident John Molyneux, a former pilot, said it would be impossible to reduce the helicopter noise to an acceptable level.

Mr Guest said it was a ”very difficult” meeting.

”We were expecting them to be angry but they were not taking on the factual information we were providing,” he said.

Promoted as a tourism opportunity by the Deputy Premier, Andrew Stoner, the audacious idea has made it through several loopholes because the heliport sits on the water instead of land.

”These pontoons will be landing areas, not aerodromes, which is why they don’t need approval,” a spokesman for the Civil Aviation Safety Authority, Peter Gibson, said.

The state government took two months to approve the heliport, after receiving the application from Newcastle Helicopters on September 11.

There are no limits on how many helicopters can fly in and out of the harbour every day, the Office of the Environment and Heritage confirmed.

Newcastle Helicopters says it wants to run as many as 20 flights a day and other operators will be using the heliport too.

The government has not prepared an environmental impact statement for the heliport despite concerns about noise and the impact on protected species around the harbour.

The government did not consult with any of the harbourside councils whose residents may be affected by helicopter noise.

Mr Guest said earlier his company would abide by the standard noise regulations applied to helicopters on Sydney Harbour and that all the helicopters based at the heliport would have noise reduction technology.

A Department of Trade and Investment spokeswoman said the heliport would be monitored throughout its 12-month licence. If it causes problems with noise, the government may revoke the licence, she said.

She said Trade and Investment had not pressured Roads and Maritime Services to hurry through the heliport proposal.