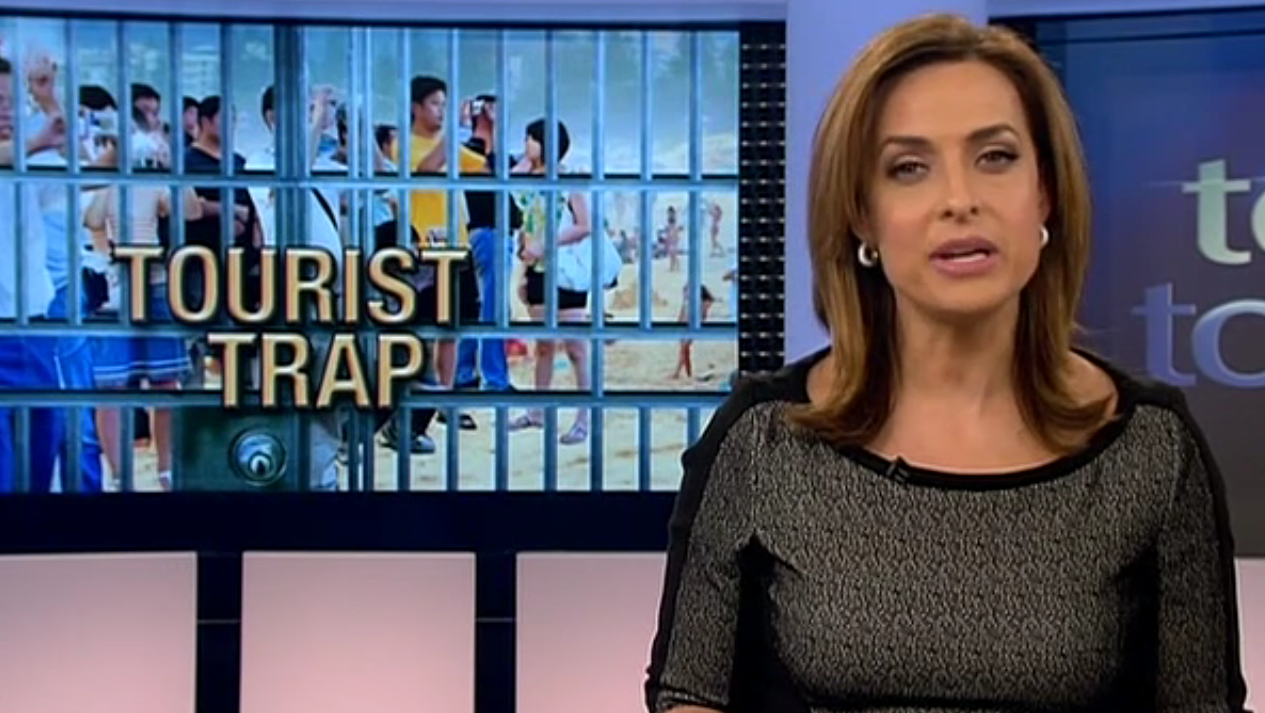 Australia’s ‘Approved Destination Status’, which requires Chinese tourists be escorted at all times through only 59 Australian operators, has been exposed on Today Tonight as a way unregulated operators can trap Chinese tourists into triple-priced duty free shops, not letting them purchase from other operators and forcing them to reach spending quotas.

One Australian operator can be seen 6-minutes into the report, mouth-open, aghast that Today Tonight are onto him.

TTN: These excerpts have been taken from Today Tonight’s report aired Tuesday 22nd May 2013. See the full report below.

The details of the Department of Resources, Energy & Tourism’s ‘Approved Destination Status’, allowing groups through a meagre 59 channels, is detailed below the Today Tonight story.

Chinese tour groups are forced to use operators with ‘Approved Destination Status’. Those operators are largely unregulated and are charging Chinese operators huge per-head costs that need to be recouped in shopping sales.

Bob Brett former head of Gold Coast Tourism: “We have some operators who will go to China to the big travel agencies there and say look, it will cost you a thousand dollers per head to use my company to come to Australia – well quite clearly for 10-14 days you can’t bring a person to Australia for that price so those people have to make their money up.”

Today Tonight voice over: ‘They are hearded like cattle, literally held captive, and told if they don’t spend money in certain shops, they won’t get fed… The word has got out, and Australia’s reputation with our biggest trading partner is being undermined by greedy and unethical operators’.

1 min 50s: “Notorious Australia” – “Flora Lo says it’s a constant battle to get tourists to come here because the internet in China is littered with negative reviews of Australia… Visitors talk about being locked in shops and not allowed to leave until they reach spending limits.”

2min 55s: “The tours are orchestrated to keep tourists away from other shops, so they can’t compare prices, or waste time seeing things they actually might want to see. Take this group (footage of van) its Queensland visit consists of arriving at Brisbane Airport and getting on a bus for a day trip to the Gold Coast. They bypass Sp instead stopping at Narroneck, one of the few beaches on the Gold Coast where there’s not a shop to be seen… they’red bussed into back streets of the Gold Coast’s commerical and industrial suburbs, herded into Duty Free stores no other tourist would ever find.(The story goes on to explain that e.g. some tablets being sold for AUD$1000 to Chinese tourists are offered to an Australian for $350). ‘But our mates rates end when they work out we’re quizzing the customers.”

6min: (Today Tonight producer) “All these stores only open minutes before the bus arrives… is it just for tourists?”…

(Today Tonight voiceover) – “They are zoned for tourism, but the Gold Coast City Council says they can open to the public”

See the full story on the Today Tonight website at the ‘Exploiting Tourists?’ link below.

Thousands of Chinese tourists have returned to their homeland feeling cheated after visiting Australia.

Some tourist operators are bringing in Chinese visitors and ripping them off.

Former head of Gold Coast tourism Bob Brett says the operators are controlling the market, and leaving a very poor impression of Australia with the tourists.

“We have some operators who’ll go to China to the big travel agencies, and tell them it will cost $1000 per head to use their company to come to Australia,” he said.

“You can’t bring a person to Australia for that price, so the operators have to make their money up in other ways.”

Some of these tours are orchestrated to keep tourists away from other shops, other than the ones that have a pre-arranged agreement with the operators. The system prevents tourists from comparing prices, or seeing the things they actually might want to see.

The main things sold in these shops are sheep skins, hand lotions and tonics. The prices are astronomical in the stores, with shark cartilage tablets selling for $1000 a box.

Flora Lo runs a tourist operation in Australia for Chinese visitors. She says it’s a constant battle convincing customers to come to the country, because the internet in China is littered with negative reviews.

The reviews on Australia in China have visitors complaining about being locked up in shops, and not allowed to leave until they have reached the spending limits.

There are other reviews that talk about not being allowed off the bus, or refused meals until they spend more.

“The reviews call Australia ‘notorious’. It says Chinese tourists are being ripped off,” Ms Lo said.

Dr Roger March has been researching this type of exploitation for 15 years. He says it happens because the tour guide industry in Australia is largely unregulated, and because Chinese tourists are too trusting and open to being ‘railroaded’.

“This is a problem for some time, and a problem that a lot of people in the tourism industry are frustrated about. The politicians haven’t come up with a solution,” Dr March said.

The latest figures show that Chinese tourism is worth $4 billion a year to Australia’s economy, and it’s set to double in the next few years. Dr March is concerned that if something isn’t done soon, it will be too late.

From the Department of Immigration and Citizenship

The Approved Destination Status scheme is a bilateral tourism arrangement established in 1999 between the Chinese Government and the Australian Government – recognising the increasing interest in visiting Australia shown by Chinese people.

As at 12 November 2012 there are 59 Australian agents who have been approved by the Minister for Tourism to participate in the scheme. Special safeguards are in place to ensure that visa holders comply with their visa conditions and that the Australian ADS agents help maintain the integrity of the scheme.

There are 88 Chinese travel agents participating in the Approved Destination Status scheme. The China National Tourism Administration regulates the operations of travel agents in China. The Department of Immigration and Citizenship has specific responsibility for the operations of the scheme in China. Both the department and the China National Tourism Administration can impose sanctions on those who do not meet the required standards.

Agents enter into a Deed of Agreement with the Department of Immigration and Citizenship. They must also abide by a Code of Conduct. If they fail to meet the levels of professionalism required, they may be sanctioned.

Additional information about the Approved Destination Status scheme can also be found on the Department of Resources, Energy and Tourism (RET) website.
See: www.ret.gov.au

Further information is available on the department’s website.
See: www.immi.gov.au

The department also operates a national general enquiries line.
Telephone: 131 881
Hours of operation: Monday to Friday from 8.30 am to 4.30 pm. Recorded information is available outside these hours.