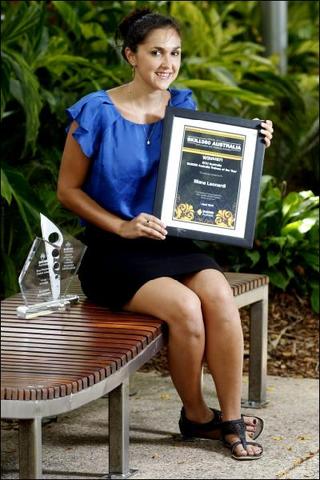 HARD work and dedication have paid off for two young Cairns people who have been named North Queensland Apprentice of the Year and Trainee of the Year.

For 21-year-old Edmonton electrical apprentice Ryan De Vecchi from Cairns Regional Council, it is the second year in a row that he has taken out the Skill360 Australia apprentice award.
Meanwhile, 20-year-old business administration trainee Illiana Leonardi from Bentley Park was named trainee of the year at the Cairns Convention Centre on Friday night.
Ms Leonardi, site receptionist for Abigroup Contractors, which is rebuilding the Cairns Base Hospital, put her success down to her good work ethic.
“I am a very determined worker,” said Ms Leonardi, who has been with the company since February last year.
Ms Leonardi is now planning to do a certificate course in frontline management.
Skill360 Australia CEO Peter Langbien said there were 140 nominations across 12 categories.
“These awards will have enormous benefits for Ryan and Illiana as they progress … , and also promotes them as role models, which helps create greater awareness of apprenticeships,” Mr Langbien said.