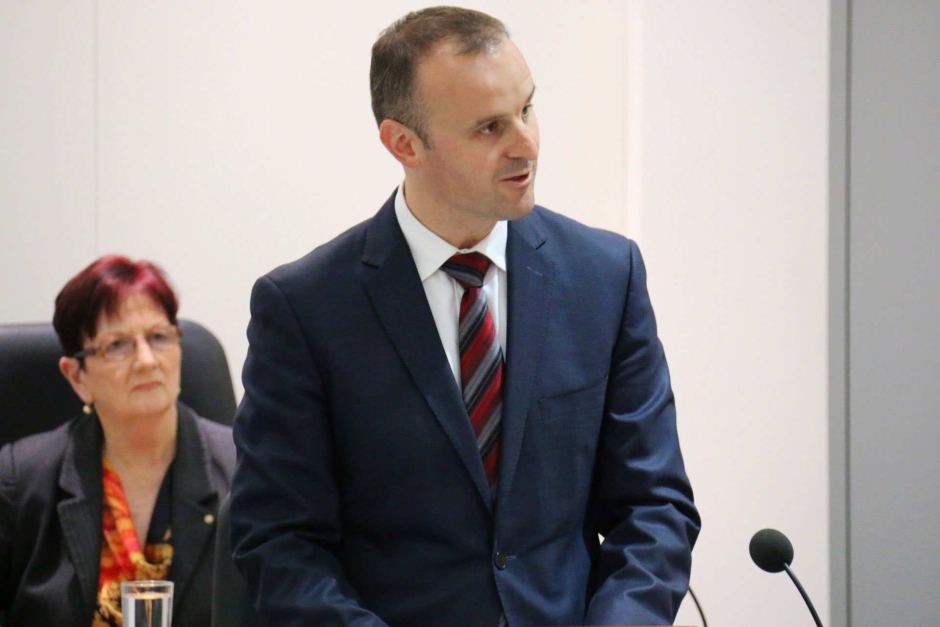 The ACT’s Minister for Tourism Andrew Barr has been promoted to ACT Chief Minister by the territories’ Labor caucaus. Since taking on the portfolios of Tourism & Events, Sport & Recreation and Community Services, the tourism industry has seen Canberra significantly increase its destination profile amongst domestic tourists.

Andrew Barr has been elected as the ACT’s new Chief Minister, the seventh in the Territory’s history.

Former chief minister Katy Gallagher announced she would step down from the top role to contest the upcoming Senate vacancy created by ACT Senator Kate Lundy.

In an emotional response to being elected Mr Barr said: “I’m deeply humbled by the responsibility”.

“I’m honoured by the results of today’s election and I’m deeply grateful for the Assembly’s support.”

Mr Barr and Mr Rattenbury also reaffirmed their commitment to the 2012 Labor-Greens parliamentary agreement under a Government led by Mr Barr.

The agreement was made in 2012 to formalise the relationship between the ACT Greens and ACT Labor to form Government until the next election in October 2016, when the agreement expires.

Mr Rattenbury said he was pleased with the progress on the agreement so far and looked forward to working with the new Chief Minister.

“There has been substantial progress on the parliamentary agreement in the first half of the term,” he said.

“Including legislating a target for 90 per cent renewable energy by 2020, substantial work towards the Common Ground project, which is now almost complete, $85m in federal funding secured to clean up our lakes and waterways, and improved animal welfare in the ACT through passage of legislation to ban caged hens and sow stalls.”

Opposition Leader Jeremy Hanson put his name forward for the position of Chief Minister in the Legislative Assembly this morning, but did not secure the needed numbers.

“The good news is I don’t have to move office, but this is a bad day for the ACT,” he said.

“When you look at Mr Barr’s record, his first job when he became a minister, he closed 23 local schools.

“We’ve seen record debt in the Territory and now it’s clear he’s going to impose his billion-dollar tram on the people of Canberra.”

Mr Barr is expected to announce the allocation of portfolios in his new-look ministry on Friday.

Barr to advocate for same-sex marriage

In his first press conference as Chief Minister Mr Barr reassured Canberrans that he would continue to be a passionate advocate for same-sex marriage.

“It is quite ironic that you can be elected Chief Minister but you can’t marry your partner of 15 years,” he said.

“It’s time that this discrimination is ended in this country and I will continue to be a loud and passionate voice for that change.”

He said the overwhelming majority of Canberrans and Australians supported same-sex marriage.

“It’s important that our parliamentarians catch up with what is an overwhelming sense that it is time for change.”

He said he was proud of Canberra’s social progressiveness.

“Canberra is Australia’s most LGBTI-friendly city,” he said.

I hope for the day when it is entirely unremarkable when someone in political leadership heading a government is openly gay or lesbian or bi-sexual or otherwise.

“We are inclusive and we strive to ensure that all of our citizens are treated equally and I look forward to the day when we can say that about our country.”

After being elected in the Legislative Assembly, Mr Barr said to his partner Anthony Toms, “I love you and I look forward to the day we can legally marry in this country”.

Mr Barr is the first openly gay head of Government in Australia.

“I hope for the day when it is entirely unremarkable when someone in political leadership heading a government is openly gay or lesbian or bi-sexual or otherwise,” he said.

“I know there’s always a great deal of interest in politicians’ personal lives, but ultimately that doesn’t impact upon your capacity to undertake your professional responsibilities.”