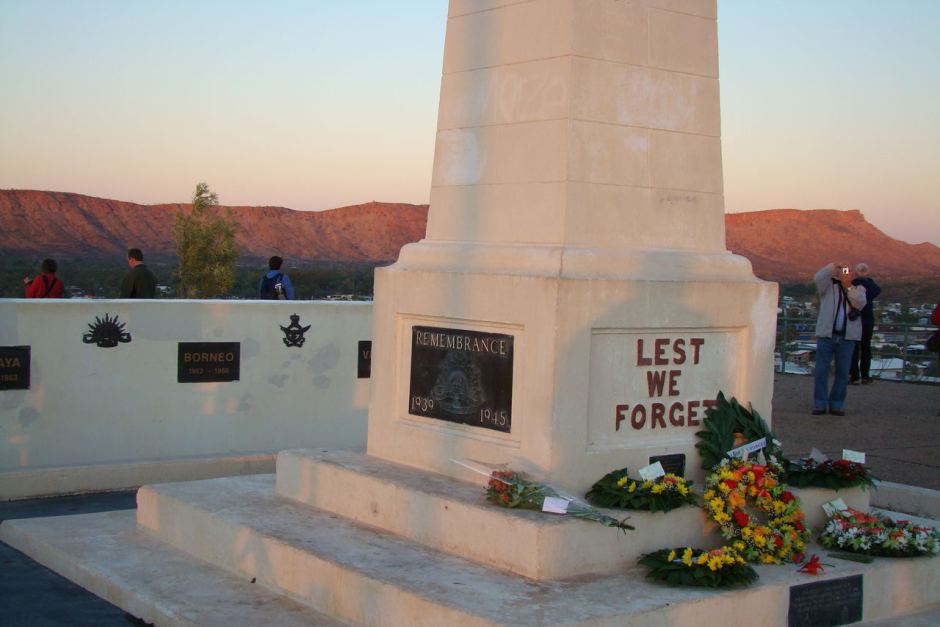 TTN: Only after a number of tourists commented on the absence of the aboriginal flag on the ANZAC cenotaph in Alice Springs has the council considered flying the aboriginal flag on the monument. The cenotaph is a registered aboriginal sacred site, and racial tension in the town is rife, but the council are still relegating the decision to the RSL. This comes shortly after a monument of a white settler holding a gun was erected in the centre of town – a monument ‘gifted’ by the stonemason community in town.

From the story below: “The Australian War Memorial in Canberra flew the ATSI flags only on special occasions, such as NAIDOC week, a spokeswoman said.

“A strict flag protocol drawn up by the Department of Prime Minister and Cabinet governed when Commonwealth buildings could fly the ATSI flags.”

The decision to seek input on whether the Aboriginal and Torres Strait Islander flags should fly at an Anzac monument has sparked fierce debate in Alice Springs.

The council narrowly voted in favour of investigating the proposal, with the councillor behind the motion, Jade Kudrenko, saying the topic would be divisive but ultimately help unify the town.

“I didn’t want to be paralysed by fear of divisive debate to not moving forward,” she said.

“Constitutional recognition is coming up in the future.

“Now is the time for a community like Alice Springs to start this discussion, and be on the front foot and lead the nation in the changes we need to make.

“I would love to see returned servicemen and women and their families on Anzac Hill united – that’s what the end goal for our town should be.

“We all come from different backgrounds and we can’t be ever be united until we recognise that.”

Alice Springs is a town sensitive to racial tensions.

Anzac Hill, at the centre of town, is also known as Untyeyewetwelye and is a registered sacred site of the Aranda people.

The cenotaph currently flies the national and Northern Territory flags.

“This is a complex issue with many layers,” Ms Kudrenko said.

“Because it is a war memorial, it is a registered sacred site, and it is a very well-visited tourist point for Alice Springs.

“For a long time I’ve never even noticed that the Aboriginal flag was missing. It wasn’t until recently a number of people approached me, and not just one section of the community, all different sections were making comment. They felt the flag had a rightful place on the hill.

“They had various different reasons. Some were new to town or tourists. They recognised that Alice Springs had a large Aboriginal population.

“They were really surprised Aboriginal people were not recognised at the centre point of our town.”

‘How many flags will we put up there?’

Alice Springs council on Monday night voted four to three in favour of investigating the proposal and consulting with stakeholder groups, including the Returned and Services League and the Lhere Artepe Aboriginal Corporation.

Councillor Brendan Heenan, who voted against the motion, said the decision should be up to the RSL, and he was not interested in the response of other stakeholders.

“I spoke against it,” he said. “When they fought, they fought under the Australian flag.

“If the RSL’s comments are negative, I will vote against it. How many flags will we put up there?”

“The motion that was placed before council was passed,” he said.

“That will then mean all the differing views will be provided back to council, so council can make a final decision.”

He said a report summarising the views of stakeholders would go to council in several months.

The Australian War Memorial in Canberra flew the ATSI flags only on special occasions, such as NAIDOC week, a spokeswoman said.

A strict flag protocol drawn up by the Department of Prime Minister and Cabinet governed when Commonwealth buildings could fly the ATSI flags.

Recognition of Aboriginal and European heritage has been a touchstone issue in Alice Springs.

Last month saw the installation of a statue of European explorer John McDouall Stuart in a park in the centre of town where Aboriginal people often slept.

Opponents argued the statue of a white man holding a rifle was not appropriate.