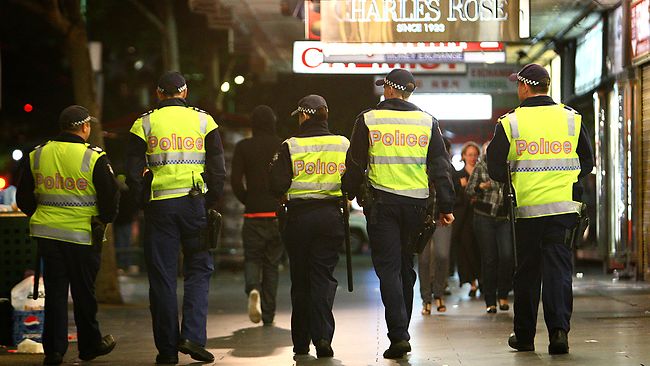 NB: This photo is of Melbourne Herald Sun, but the use of police resources on alcohol violence tell the same story in every Australian city.

A lack of progress on liquor law reform nearly nine months after the review of WA’s liquor laws was released is frustrating, says the state’s Police Commissioner.

The review of the Liquor Control Act, released in January, made 141 recommendations including the introduction of secondary supply laws making it an offence to supply liquor to a juvenile on unlicensed premises without parental consent.

It also recommended giving WA police the power to catch out liquor stores selling alcohol to juveniles, by sending in underage police cadets to “sting” retailers.

The Government said at the time it would then study the report in detail and meet key stakeholders before acting.

But Commissioner Karl O’Callaghan told ABC Local Radio 720 he is frustrated the state is not acting fast enough.

“I’ve heard nothing since, we’re nearly 12 months down the track and there’s some very important suggestions that have been made in there including the right for the community to lodge an objection or an intervention for a liquor license in their area,” he said.

“Yes, I am [frustrated], that’s a good way of putting it because there are a range of things in there … that need to be looked at to deal with some of the liquor problems we’re dealing with.”

He said alcohol abuse was costing a huge amount of police resources.

“Liquor misuse is driving about 60 per cent of the cost of policing in this state, at a time when the state is looking for ways to reinvest money in other areas,” he said.

The wait for action has also drawn criticism from health advocates, but Racing and Gaming Minister Terry Waldron says the Government is doing its due diligence.

“We’ve been finalising the recommendations from my office, they’re now within Government and we’ll hopefully have something to Cabinet before the end of this year,” he said.

“We need to do these properly, these recommendations are very important and could have a big impact on the community.

“Some people might say it’s taken a long time, but this is really important we get it right.”

Mr Waldron says the Government’s position on the proposals will be made publicly clear by the end of the year.

But Mike Daube from the McCusker Centre for Action on Alcohol and Youth says the Government has been taking far too long.

“There’s no excuse whatsoever for a delay, something like secondary supply legislation already exists in several states around the country and we know it’s feasible,” he said.

“They just seem to be sitting on the review.”

“We’ve got a major problem with alcohol consumption in our society and it’s time for action now,” he said.