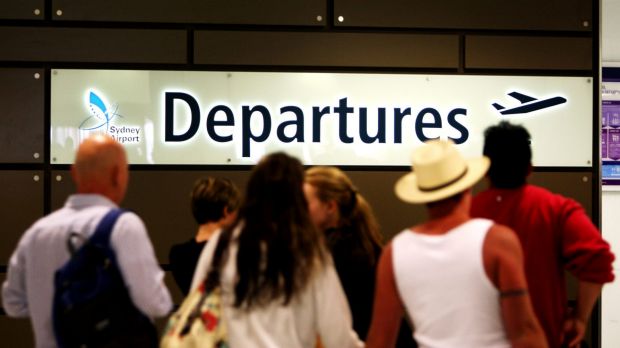 Passengers are paying higher airfares than they should because of the high fees Sydney Airport and the country’s three other largest airports slug airlines, the competition tsar has warned.

The amount Sydney Airport reaps in so-called aeronautical revenue rose by more than 4 per cent to $18.30 per passenger last financial year, the Australian Competition and Consumer Commission’s annual report card on the airports shows.

Airports earn most of their aeronautical revenue from charging airlines for aspects such as using runways, parking bays, aero-bridges and terminals.

ACCC chairman Rod Sims said a rise in profits per passenger at each of the country’s four largest airports also meant travellers were paying for it through ticket prices.

“It is not surprising that the airports are so profitable, given that they face little competitive pressure and no price regulation,” he said.

“Airfares are going down but they would have been going down further if you hadn’t had constant increases in the aeronautical charges from the airports.”

And Mr Sims has again raised concerns about a lack of regulation to constrain the market power of Sydney, Melbourne, Brisbane and Perth airports.

“Unconstrained monopolies often have an incentive and ability to charge excessive prices while lacking strong incentives to improve services,” he said.

“They are free to set their prices, and of course, they are monopolies.”

The Productivity Commission is set to begin an inquiry later this year into the economic regulation of airports, the first since 2011.

The ACCC will be proposing some form of regulation be imposed on the airports, including the possibility of arbitration as an avenue for setting aeronautical charges if airlines and airports cannot reach agreement on their own.

“It would give airlines enough clout to get a good deal,” Mr Sims said.

High fees for car parking have long been a bane of passengers.

Sydney Airport had the highest profit margin from car parking for the fourth consecutive year at almost 72¢ for each dollar of revenue.

While the airport’s profit margin from car parking fell 1.2 percentage points last financial year, it was still the highest of the four main airports. Brisbane’s was 68 per cent, Melbourne (almost 60 per cent) and Perth (52 per cent).

But an 8 per cent fall in the number of vehicles passing through Sydney Airport’s car parks each day resulted in total revenue from them falling by almost 1 per cent in real terms to about $135 million.

The fall in vehicles parked at the airport was greatest at the domestic terminal, where average daily throughput plunged by 29 per cent.

The airport has blamed this on road congestion and disruption from upgrades to thoroughfares around its outskirts encouraging more people to catch the train to and from the domestic terminal.

Sydney Airport’s overall quality of service remained on a par with Melbourne at “satisfactory”, compared with a “good” rating for Perth and Brisbane.

With construction of a $5.3 billion airport about to ramp up at Badgerys Creek in Sydney’s outer west, the regulator said it was vital Western Sydney Airport was kept free of the operational restrictions such as a curfew imposed at Kingsford Smith.

And it also urged governments to regularly review operational regulations at the slot-constrained Sydney Airport to ensure the benefits outweighed the costs.

Sydney Airport said in a statement that it had been working hard to provide more options for people driving to Kingsford Smith, and almost 40 per cent of those who drove took advantage of the 15-minute free parking.

The revenue from aeronautical charges also reflected the fact that it was Australia’s largest airport, and it invested about $1 million each day in infrastructure to cater for growth in passengers, it said.