Airport curfew a ‘dead weight’ cost to the economy 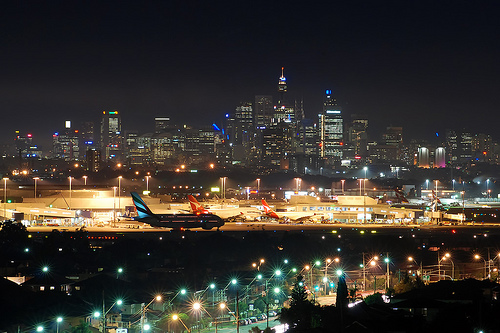 Sydney Airport has released a 20-year masterplan that still does not address why capacity can’t increase in a matter of months by simply flying over water from 11pm-6am.

Previously published on The Tourism News

Sydney needs a Second Airport because…

The belief that Sydney’s Kingsford-Smith airport can cope with demand beyond 2029 shows a “lack of understanding,” says airline ndustry expert, Warren Bennett. Bennett says there is a “desperate need” to start building a second airport before the end of the decade to assist Australia’s busiest airport.

Servicing over 35 million passengers last year, an independent report commissioned by Federal Transport Minister Anthony Albanese in 2009 predicts passenger demand in the Sydney region will more than double by 2035, then double again by 2060.

The Joint Study on Aviation Capacity for the Sydney Region report, which was released earlier this year after being overseen by a committee of government and industry experts, warns that all possible flight slots will be allocated by 2027. By 2035, there will be no capacity for additional growth at Kingsford-Smith.

Kingsford Smith is one of the oldest continually operating airports in the world, with its namesake, the famed Charles Kingsford-Smith, making the first official flight in 1920.

During the 1970′s, the Major Airport Needs of Sydney group was established to identify potential new sites, selecting Badgerys Creek and Wilton as suitable options.

When Bob Hawke was in power, a quarter of a century ago, the Labor government purchased 1,700ha at Badgerys Creek, in Sydney’s west, with the intention of building Sydney’s second airport. Though, in 2003, Simon Crean announced Labor would not build an airport at the site, saying that it was no longer suitable.

Despite experts announcing it as the best option, the land remains untouched to this day, while other sites including Camden, Richmond and Canberra are now being considered.

The No Aircraft Noise Party was formed in the 1990′s in opposition to the third runway built at Kingsford-Smith. The runway was a controversial issue as it increased aircraft movements over inner-Sydney suburbs.

After the Howard government came to power, arrangements were set in place with the airport to maintain flight curfews between 11pm and 6am, in an effort to alleviate complaints of aircraft noise. Wherever possible aircraft are directed to fly over water when the direction of flight is not dictated by strong winds.

A comparison between major international airports has shown that Sydney Airport restrictions are equal to the toughest around the globe. Sydney is one of the few airports in the world that enforces the 11 to 6 curfew on all passenger flights.

Bennett agrees that Badgerys Creek would be the best site for the proposed airport and says that a second Sydney airport should be curfew-free.

Neil Hansford, an aviation analyst, says modern passenger craft are no louder than the freighters which are permitted to fly during Sydney’s curfew.

“The noise profiles of these planes are very similar,” said Hansford, when considering the differences between aircraft. “There’s no reason why they couldn’t take off and land as long as it was over Botany Bay.”

Restrictions on night flying are imposed by a governing body to limit exposure to aircraft noise during night hours.

In the USA, California’s LAX is the primary airport of Los Angeles, the second-most populated metropolitan area in the United States.

Like most major airports in the US, LAX does not have night time flight restrictions, though a voluntary agreement exists between the city and the Federal Aviation Administration (FAA) determining that all late night arrivals and departures are over water to mitigate noise complaints from surrounding communities. Only during times of low visibility or high winds, flights operate the opposite way over the city due to flight safety.

Top advisors to the federal and NSW governments have stated that without a second Sydney airport the economy of the state and nation will be negatively impacted. It is expected that the Australian aviation system will experience increased flight delays, and roads around the Kingsford-Smith airport will be gridlocked.