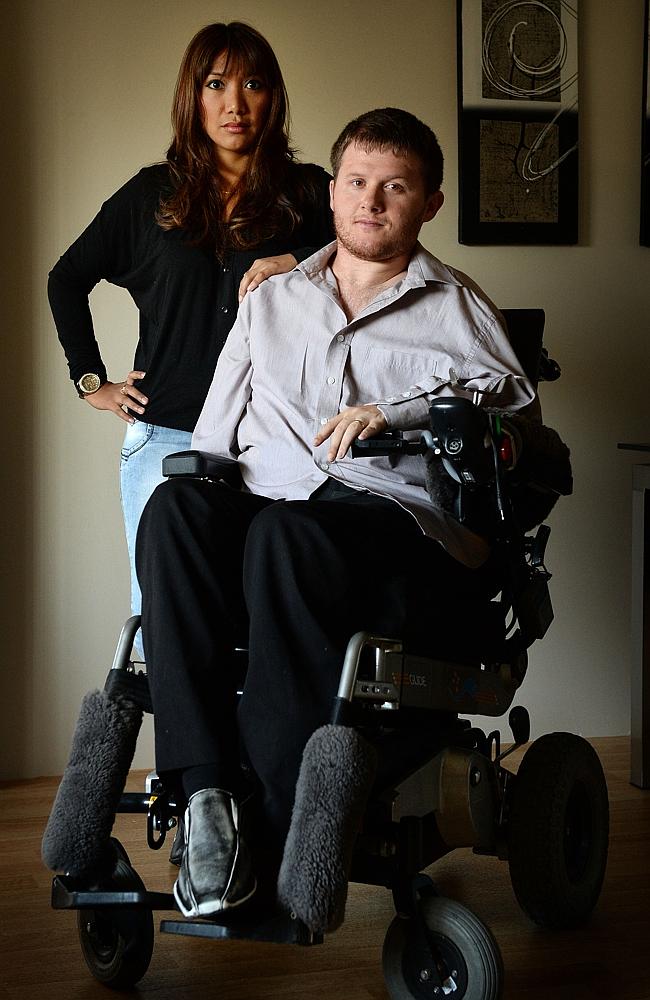 A QUADRIPLEGIC man, named WA Young Person of the Year in 2011, was forced to leave his wheelchair behind at Perth Airport after an airline refused to stow it.

Peter Darch was “disgusted” when told he could not bring his electric wheelchair with him on an Air Asia flight to Bali last Tuesday.

The Mandurah resident, 29, was flying with his wife, parents and grandparents.

But after the airline refused to take his foldable wheelchair his wife had to fork out $700 on a new flight with another airline that would take the wheelchair to Bali.

Mr Darch, who works for the WA Chamber of Commerce and Industry, has lodged a complaint with the Australian Human Rights Commission citing disability discrimination.

“Around one hour prior to takeoff we were approached by the same customer service representatives that checked us in and informed that I would not be able to travel with my electric wheelchair,” Mr Darch wrote to the commission.

“Despite having a dangerous goods certificate deeming the (wheelchair’s) battery safe for travel, the airline refused to take it on the plane.

“I informed the airline that I could potentially remove the batteries and purchase some in Bali. The airline’s response was no, that even without the battery – which had originally been used as the reason the chair could not travel on the airline – it would not be allowed in the cargo hold.

“This was something I did not understand because, as I informed them, the chair can be folded to a size that is not much bigger than most suitcases.

“Unfortunately, the only way for us to have my chair in Bali was for my wife to remain at the airport from 8pm until 7am the following day and purchase another ticket on a Garuda flight, bringing my chair with her.

“We asked Air Asia at the time if they could enable me to use one of their wheelchairs at the Bali airport to be transferred to my hotel … we were told this was not an option and were forced to hire a wheelchair from a travel company in Bali.”

“Airlines are not allowed to treat people less favourably on the grounds of their disability,” he said. “If they refuse to carry a person’s mobility aid, if any airline did that, it would potentially be in breach of legislation.”

In a statement to The Sunday Times, Air Asia said: “Air Asia sympathises with Mr Darch for this inconvenience, however the airline on its website expressly prohibits the carriage of battery-operated wheelchairs and mobility devices.

“While we were not able to uplift his battery-powered wheelchair, at no stage was Mr Darch discriminated against.”