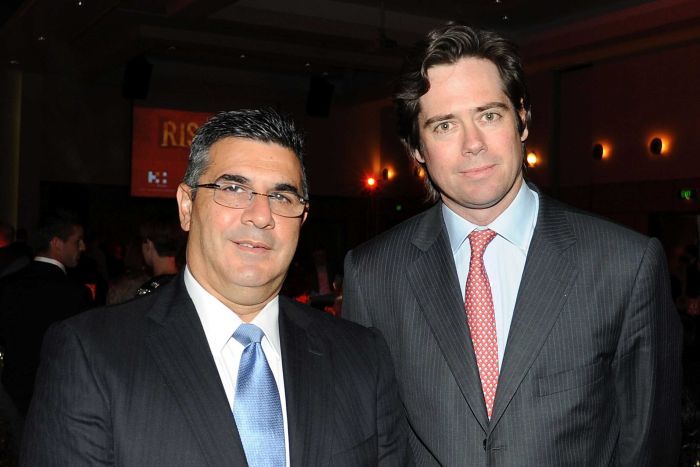 Gillon McLachlan was unveiled as the AFL’s next chief executive on Wednesday and will take the reins from Andrew Demetriou in early June.

Early last month, Demetriou said he would resign at the end of the 2014 season but, with the AFL Commission settling on McLachlan as his replacement, that was bumped forward to June 5.

“He is indeed the best man for the job,” Commission chairman Mike Fitzpatrick said at a press conference on Wednesday.

“This appointment is fitting reward for the hard work, commitment and leadership we’ve seen from him in his time at the AFL.

“It’s particularly pleasing to be able to appoint a candidate developed from our own game.”

McLachlan emphasised parity in the league as a particular point of emphasis for him and said the experience gained since joining the AFL in 2000 put him in good stead to take over.

“I am incredibly proud to be sitting here accepting the job of the chief executive of the Australian Football League,” McLachlan, 40, said.

A ruckman with Victorian Amateur Football Association club University Blues, McLachlan does not have the same AFL pedigree as his predecessor but says he still understands what clubs are going through.

“I have a strong knowledge, I think, of the clubs and the pressures they’re under,” he said.

“I also feel I was a strong candidate because I understand the passion of football. I have been part of the community of football and I know how important it is.

“I’ve played over 240 games of amateur or country football. I have captained a club. I have been on the committee of a club. I am a life member of a club.

“I have had my fair of cold showers and freezing committee meetings.”

With four football codes competing for crowds and exposure across Australia, McLachlan expressed his desire to consolidate AFL’s status as the country’s favourite.

“I have a clear vision of where I feel the game needs to go and how we are going to get there,” he said.

“For me, that vision is about having an unassailable hold on the Australian community. In women, in children, as much as men, from the north, to the south, in all communities.

“Success in delivering on this vision will mean ultimately three things; we are truly national, we are truly representative and we are truly connected to the community.

“If we do that, I believe we will fill every stadium and success will follow.”

McLachlan previously filled the CEO role for two months in 2012 when Demetriou went on long service leave and was named deputy chief executive later that year.

Demetriou has always been quick to praise his second in command and doing his best to promote his cause without breaking any rules.

“Gill has made a significant contribution to the AFL across a number of strategic fronts and this promotion is well deserved,” Demetriou said while announcing the re-shuffling of the AFL’s executive structure.

“McLachlan has done so much to support me, and the AFL’s agenda, with little thanks, or profile,” he said at a season launch in Adelaide this year.

AFL Commission chairman Mike Fitzpatrick said the appointment was the “result of an extensive executive search” with the final decision a choice between McLachlan and two others – reportedly Geelong’s Brian Cook and Richmond’s Brendon Gale.

But McLachlan had been the front-runner since Demetriou announced his resignation in early March.

In addition to his position as the AFL’s number two, he has also served as chief operating officer since 2008 and spent some time as acting head of football operations.

Since becoming COO he has been vital in bringing the Gold Coast Suns and Greater Western Sydney Giants in as the 17th and 18th teams in the league and securing lucrative stadium deals.

He also led the AFL’s negotiations with Essendon during last year’s ASADA/supplements scandal, investigated claims of tanking by the Melbourne Demons and has been pivotal in improving the media and broadcast deals.

McLachlan was in the running for a position as NRL chief executive when the league was restructuring in 2012 but knocked the job back, allowing Dave Smith to step in.