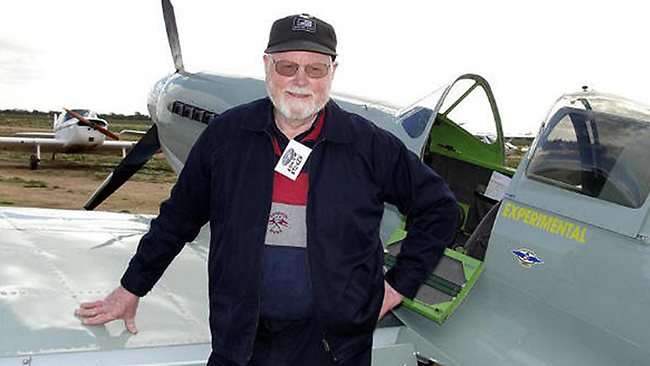 SHOCKED witnesses who saw a replica World War II fighter plane plunge into a Salisbury factory car park yesterday rushed to the aid of the veteran pilot. But Roger Stokes, 73, of Monarto, died on impact.

Police said it was “fortunate” the plane crashed in an unoccupied industrial site rather than at a soccer game in progress just 200m away.

The Spitfire replica had been performing in the Classic Jets Original Parafield Airshow at Parafield Airport, about 1km away.

It flew low near Cockburn Green in Brahma Lodge, where soccer teams Elizabeth Downs and Brahma Lodge were playing.

Horrified players and spectators watched it plunge to the ground.

Soccer fan Bailey, 12, from Gawler, said he saw the plane in an uncontrolled nosedive close to the oval, before it crashed into an iron railing fence between the R.M. Williams carpark and an adjoining factory.
According to Bailey, the plane did a barrel roll when a wing seemed to give way.

“It did a barrel roll and as it did it, it came back up to turn again and the wing gave way and it went straight down,” he said. “It was twirling, turning on its back and going nose first.”

He said people at the soccer match ran across the road to try to help. Two of them, including a player, leapt the fence of the R.M.Williams factory carpark to reach the crash scene.

Bailey said that one of them reached the wreckage and tried unsuccessfully to find Mr Stokes’ pulse.

Police would not speculate on whether Mr Stokes was able to use his last seconds to divert his plane into a non-populated area.

“It’s lucky it was in an isolated, closed-off carpark compared with the sporting grounds across the road,” Chief Inspector Krystina Koza said.

“So we consider it fortunate that it took place here rather than there.”

At Parafield Airport, spectators were in disbelief when the tragedy was announced and the airshow cancelled.

The Spitfire’s flight was well into the running order in the airshow, which had started at 11.30am.

Di Wilson, from Brahma Lodge, was among those who saw the classic plane – an 80 per cent replica of the famous single-seater fighter – suddenly just disappear from their view.

“I was in disbelief,” she said. “I wasn’t sure what was going on. People didn’t know what was happening and we were asking if the Spitfire had come back in.”

An announcement was made to the crowd of some 5000 people about 10 minutes later.

The airshow was called off and all other aircraft were grounded.

The director of the Classic Jets Fighter Museum and organiser of the event, Bob Jarrett, said he was “pretty upset” by what had happened.

“He (Mr Stokes) was an acquaintance who came and supported our air displays from time to time,” he said.

Mr Jarrett said that he did not see the accident because he was inside a hangar when it happened.

The crash scene was secured by Metropolitan Fire Service crews and SA Police, who blocked off a section of Frost Road, which runs between the oval and the factory site.

Ms Wilson said that some pilots earlier in the day expressed concern at the strength of cross-winds when they were flying.

“They were reporting back that it was quite strong up there,” she said.

The Australian Transport Safety Bureau will investigate the causes of the crash.

SA Police will now prepare a report for the Coroner and they have asked witnesses to come forward or they can phone Crimestoppers on 1800 333 000.