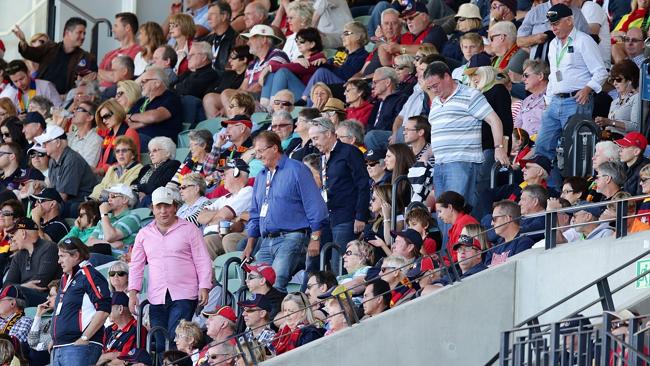 ADELAIDE City councillors have accused “people from the suburbs” of littering and vandalism after weekend AFL matches at the new Adelaide Oval.

The council has launched an investigation into claims road signs are being damaged, buildings scrawled with graffiti and roads littered with rubbish from spectators attending the new home of South Australian football.

The claims have prompted calls for more money to be spent cleaning up North Adelaide and the surrounding areas.

They come amid new criticism over the “naughty” use of giant electronic billboards to display third commercial party advertising, which councillors claim are against parklands rules. Huge crowds have attended games since but locals have raised concerns about the conduct of some who walk to and from nearby strips such as O’Connell and Melbourne streets.

“You could follow the trail from Adelaide Oval to O’Connell St,” she said. “People are tagging signs (and) there was a building … that was very badly tagged,” she said.

“They are people from the suburbs who may have a lower care factor about littering,” he said.

Councillor Anne Moran, who also represents local residents, called for an upgrade to the maintenance budget, particularly along O’Connell St, which had been blighted by “more litter”.

At a meeting on Tuesday Cr Clearihan also raised objections at the oval’s “fairly naughty” use of its giant electronic billboards located outside the ground.

She said advertising for Oval events, facilities for hire or promoting games was permitted but other promotions were “not appropriate” because they did not involve parkland operations.

Calling on officials to “honour the intent” of parkland laws, Cr Clearihan won support from the council. Council staff will now write to Infrastructure Minister Stephen Mullighan to request that advertising be restricted.

The council does not have direct control over the Oval precinct after it leased the area to the State Government.