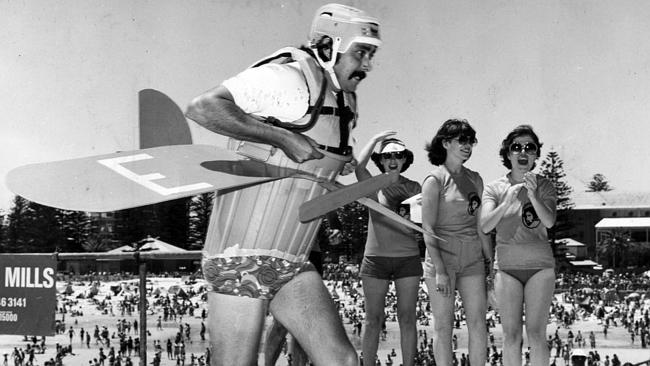 Competitor in makeshift plane preparing to jump from Glenelg jetty in the 1978 Birdman Rally event. Competitor in a makeshift plane jumps from Glenelg jetty in the 1981 Birdman Rally event. Source: Supplied

WHATEVER happened to those terrific fun events the Birdman Rally and the Milk Carton Regatta?

Back in 1979, Brian Doddridge was just 14 years old and thought that pigs might fly. Well, at least his pig.

Brian had entered the Channel 10 annual Adelaide Birdman Rally and, with the help of some friends and family, had created what he planned to be a giant pig that would fly.

The rally was an annual event and the first Birdmen flew over the Torrens lake in April 1975. It was originally conceived as a fundraiser for the Channel 10 Christmas appeal, with all proceeds going to the Children’s Medical Research Foundation.

The success of that first event even surprised the TV channel when, on the day, 25,000 spectators turned up on the banks of the River Torrens to watch the intrepid contestants attempt to fly or glide for a distance of 50m over the water after a running takeoff from a
6m high platform.

Prizemoney of $5000 was offered to the first birdman to make the distance.

Twenty hopeful would-be flyers lined up with a range of gizmos and contraptions made from all sorts of bits and pieces, including bicycle parts, umbrellas, balsa wood wings and kites, as they tried to flap, glide or float on air over the distance. Hang-glider pilot Terry Murphy and helpers at the 1980 Birdman Rally at Glenelg.

The winner of that first event was an experienced hang-glider pilot, Colin Clarke, who managed just 18m before plunging into the murky depths of the Torrens.

The huge success of the day created a problem. The large crowd had caused a great deal of damage to the water’s edge, with natural vegetation disturbed and literally tons of litter left behind.

Although it was an enormous success, and the people of Adelaide had voted with their feet, it was decided that future Birdman rallies would be held at the beach at Glenelg. Entrants competing in the Milk Carton Regatta on the Patawalonga, Glenelg, in 2002.

So the following year and each year thereafter, the Birdmen and women turned up at the Bay to try their luck at flying like a bird, sailing through the air or gliding like an eagle on outstretched wings. Most of the homemade contrivances didn’t fly at all, and participants simply dropped like a stone from the jetty into the water.

Some would dress up in novelty costumes, such as a chicken suit or with top hat and tails, to make their attempted flight a bit more colourful and entertaining.

Each year prizes were awarded for the longest flight and most novel male and female entry. Milk Carton Regatta on the Patawalonga River in 1983.

There was also an unlimited wingspan section, with a $500 cheque for the longest flight of that class.

Trevor Clements recalls that he would anchor his boat just off the jetty for the whole day along with dozens of others, and with family and friends, watch the crazy antics of the contenders.

Graham Earris remembers riding his pushbike to the beach to watch: “I’m not sure it could even happen today, people jumping off a jetty with ridiculous costumes on hang gliders and the only safety precaution, a boat standing by to pull them out of the water. Fantastic stuff though”. Milk Carton Regatta on the Patawalonga River in 1983.

Perhaps he’s right. For whatever reason, the last Birdman Rally took place at Glenelg in 1986.

Ashley Roocroft believes they should: “bring back the Birdman Rally, it was awesome! As a kid that was a highlight of summer. That and the Milk Carton Regatta. Whatever happened to those great events?”

The Milk Carton Regatta was Adelaide’s answer to Darwin’s Beer Can Regatta and was first staged at the Patawalonga in 1980. “The Schwimwagen” car built out of milk cartons on the Patawalonga, Glenelg, in 1984.

It too was sponsored and broadcast live by Channel 10.

Again, thousands of people would turn up each year at the Pat for a fun day out and watch in amusement and sometimes amazement at some of the milk carton creations that took to the water.

Prizes were offered for the first vessel to cross the finishing line, although many were lost along the way, either sinking or breaking apart.

Crafts came in all shapes and sizes, some with a great degree of sophistication while others were held together with a bit of wire, sticky tape and string, their creators more intent on a day of fun than winning a prize.

Tracey Fieldhouse recollects saving all the milk cartons at home to make a boat at school for the class to complete.

Mark Mywords reminisces about friends testing their creation in the backyard swimming pool “before making some final tweaks for the real thing. Great times!”

And Robert Hodgson remembered his son and a mate built an aeroplane as an entry and won $100. “We still talk about it to this day. It was a fun time”.

The last annual Milk Carton Regatta was held in 1987 after the Patawalonga was deemed to be unsafe for recreational activities.

It was revived by the Variety Club as a one-off event in 2002 when the Patawalonga was again deemed safe.

There was some hope raised back in 2010 that both events could be relaunched by the Holdfast Bay City Council when Mayor Ken Rollond suggested that all that was needed to reintroduce them was for the council to “cover the public liability insurance and safety costs to bring them back to the Bay”.

As Mr Rollond noted at the time: “If they can have a Birdman Rally in Melbourne (on the Yarra River as part of the Moomba Festival), I don’t see why we can’t have one here.”

Well-known former TV personality Anne Wills, who worked at Channel 10 at the time and covered both the Birdman Rally and the Milk Carton Regatta, said: “Both events were hugely popular and if held in conjunction with something like the Adelaide Festival or Fringe or even the Clipsal 500, I think they would be popular again, because it’s the type of thing that South Australians come out and support.”

So, like Brian Doddridge, who believed and hoped that one day his pig would soar like an eagle and finally show everyone that pigs can fly, we too can only live in hope that the Holdfast Bay City Council will one day find a reason to reintroduce these truly popular family events.

Don’t hold your breath though, Brian’s pig dropped like a brick.