Adelaide faces a summer of no cricket 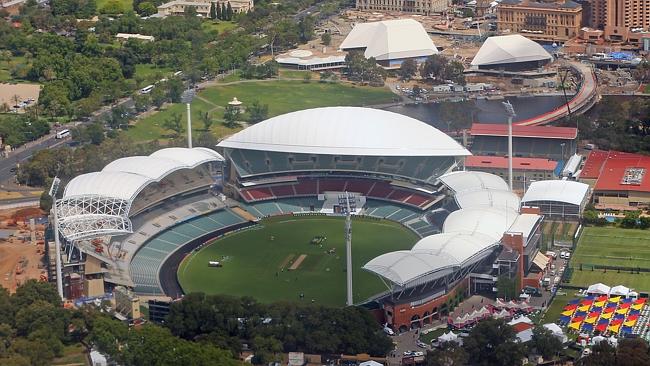 TTN 21st June: South Australian Sport Minister Leon Bignall has unleashed a tirade against Cricket Australia after the traditional Australia Day cricket match at the Adelaide Oval was moved to Sydney. The draw leaves Adelaide Oval without an International One Day game over the 2014-15 summer season.

Perth tourism too has suffered a significant blow, losing a test match as the season 2014-15 test against India is downgraded from 5 tests to 4.

From the Adelaide Advertiser, 20th June 2014

SA cricket fans are furious after advertiser.com.au revealed exclusively on Friday that Sydney had stolen the international one-day match usually scheduled in Adelaide.

Mr Bignell said Cricket Australia had been “totally inept” in its handling of fixtures for next summer.

“We have built the best stadium in Australia, it is disappointing,” he said.

“CA didn’t put one cent into the development. In era of professionalism, cricket needs to grow up and get into the modern era, behave like a modern-day sporting organisation that allows us to capitalise on our $535 million expenditure and tourism potential that big games present at Adelaide Oval.”

Now considered the jewel in the crown of South Australian sport, the redeveloped 50,000 seat Oval will remain empty on a weekend that was previously a mecca for cricket fans, during the redeveloped stadium’s first summer of full operation.

Even before it poached the Australia Day match, the Sydney Cricket Ground was the big winner on the 2014-15 cricket calendar. As well as a New Year’s Test, it will host a World Cup semi-final, a quarter-final and pool matches involving Autsralia and England.

SACA members were encouraged to vote for the Oval upgrade to secure cricket’s future and a union with football in the city.

There are now concerns over Adelaide Oval’s ability to attract international cricket and whether it will regain any Australia Day one-day or Test matches.

The loss of the Australia Day game comes after SA Cricket Association and government were forced into a bidding war to stage the second Test between Australia and India, which The Advertiser can reveal will be played from December 12-16.

Mr Bignell would not disclose how much the Government – and/or SACA – had paid to retain the Test date and also land a World Cup quarter final on March 20.

Adelaide has only missed out on Australia Day action in 2003 and 2013 due to Adelaide Oval’s refit.

SACA – once routinely allocated Test and one-day games – has even lost a one-day fixture between Australia and South Africa to Canberra this year, on November 19.

Unless Michael Clarke’s men make the World Cup quarter finals, Adelaide faces a summer in which Australia does not play an international one-day match here.

Perth will miss a Test this season during India’s four-match Border-Gavaskar series.

CA boss James Sutherland told The Advertiser that 2014-15 was an unusual summer due to schedule complications caused by the 2015 ICC World Cup, to be staged through February and March.

The new-look Adelaide Oval presents a beautiful vision in this picture by Sarah Fairbanks, submitted through NewsForce. But that did not save it from losing its traditional Australia Day clash.

“One of the critical things about this summer is that there are only four Test matches and there are venues around the country that are missing out on Test cricket,” he said.

“We’ve looked to complement them with other content, try and find a balance while at the same time, sharing matches around.”

The Advertiser has learned that Adelaide will host the second Test from December 12-16 and the Twenty20 opener between South Africa and Australia on November 7.

Mr Bignell is angry that Cricket Australia will not officially release 2014-15 fixtures until next week.

“It’s nearly July. You would reckon Cricket Australia would put a schedule out when we are hosting a Test,” said Mr Bignell, who returned last week from a promotional mission to the subcontinent.

“CA hasn’t been telling anyone in the world when a Test will be played — that is inept management, a disgrace. They should have had this schedule out two months ago.”

However, Opposition Leader Steven Marshall criticised the Labor Government for being “asleep at the wheel” of event programming. Adelaide’s World Cup highlights include a clash between arch rivals India and Pakistan on February 15 and a quarter-final on March 20.

Sydney has pinched the rights for Australia Day cricket this summer from Adelaide, with Michael Clarke’s team to host India in a one-day international at the redeveloped SCG on the January public holiday.

Cricket Australia is expected to announce the schedule for the upcoming season on Monday, revealing the dates for the four-Test series against India and then a triangular ODI series with India and England leading into the 2015 World Cup.

There are tipped to be several new initiatives in the domestic schedule as well on top of the already announced new Sheffield Shield points system. The Ryobi Cup, which was held for the first time in a month-long format in one city last year, is set to be shared with games in Brisbane and Sydney during October. And there is also an interesting development in the works at Cricket NSW, with officials deep in negotiations about staging a Shield match in Wagga Wagga and Newcastle this summer. The four Tests against fifth-ranked India are to be held in Brisbane, Adelaide, Melbourne and Sydney starting in December following a limited-overs series against South Africa in November.

The redeveloped SCG is the big winner of the 2014-15 calendar. Already locked in to host a World Cup semi-final and quarter-final and pool matches involving Autsralia and England its acquisition of the Australia Day one-dayer is a significant coup. Adelaide has for more than a decade enjoyed almost exclusive ownership of international cricket hosting rights on January 26, staging either Tests around the date or one-dayers.

The city surrendered Australia Day rights two summers ago – replaced by Sydney’s ANZ Stadium, which held a Twenty20 international – when Adelaide Oval was undergoing a redevelopment and was able to accommodate less than 20,000 spectators. However, the venue will in January lose one of the marquee days of international cricket to Sydney again despite having had its $535 million facelift completed, lifting its capacity to more than 50,000.

The match against India at the SCG will form a key part of the Australian team’s preparations for the World Cup, to be held in Australia and New Zealand, starting on February 14.

Perth is the other city dealt a major blow in the summer schedule, missing out on a Test as the series against India will be played over only four matches. In 2011-12 Clarke’s men thrashed India 4-0 and they will arrive here this season for the first time in many years without retired legends Sachin Tendulkar, Rahul Dravid and VVS Laxman and out-of-favour veteran Virender Sehwag.