Adelaide Council: ‘A’ in Tourism, ‘F’ in procurement 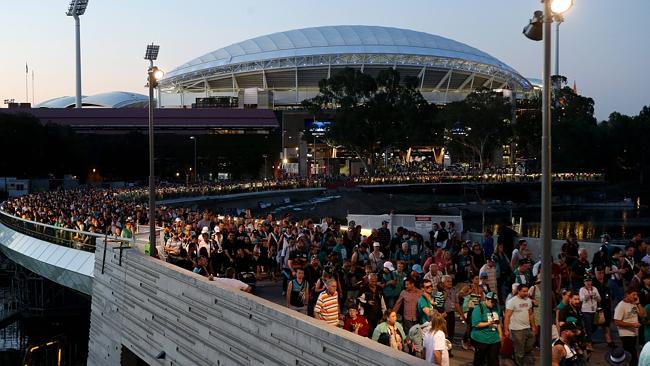 TTN: The Adelaide City Council want to lobby the AFL to start Adelaide Oval matches around mealtimes to complement the city’s hospitality industry. The ones ACC really need to convince are the AFL broadcasters, who pay to broadcast in peak rating times.

In more pressing matters, Adelaide’s much anticipated River Torrens Footbridge is a hit – but now, due to predictable maintenance costs, the council say they can’t afford to maintain it.

The Council hopes to recoop some costs by charging Adelaide residents – including brides – to take photos on the bridge. Tip to Council: New York’s Central Park became an international icon by not charging for photography in most areas of the park.

Back in 2012 the council was keen to have control of the state-funded bridge and the South Australian Government agreed.

But councillor David Plumridge says taking it over now would mean costs would have to be met from the council’s general revenue.

“We’ve got a clearer picture now what the bridge involves, the cost of maintenance and upkeep and cleaning and so on but I still think basically council has a responsibility to own and maintain these assets in the city,” he said.

“It is a very important part of the issue of public transport access to the oval, making it easier to come from North Terrace and the railway station, [it] helps to bring people in by public transport and that’s worked remarkably well.”

Part of the maintenance costs might be raised by leasing parts of the bridge and its waterfalls for use at events including weddings.

“We supported the bridge right from the beginning, now we need to maximise its use,” Councillor Plumridge said.

Tuesday night’s council meeting is due to vote on accepting ownership of the footbridge.

From the Adelaide Advertiser, 23rd June 2014

ARE South Australians being short changed on the $40.6 million Torrens Footbridge?

That’s the conclusion of many who have seen Singapore’s award winning Helix pedestrian footbridge in Marina Bay.

International tourists are flocking to walk the length of the 280 metre long structure, recently voted 14th among the world’s Top 20 most amazing bridges.

Not even the greatest supporters of the “functional” footbridge across the Torrens – approved as part of the $350 million redevelopment of the Adelaide Convention Centre – expect it to make that list. Inspired by the helical spiral structure of DNA, the Helix bridge was opened in 2010 and won the “World’s Best Transport Building” award at the World Architecture Festival Awards the same year.

Its design and construction is anything but pedestrian.

It features a computer-controlled lighting system to set the mood at night and viewing platforms with stunning panoramas of the city skyline. Construction has started on the $40m River Torrens footbridge.

In contrast, the Adelaide footbridge will be exposed to the elements, there are no extensive “disco” lights and doubts remain if it will be wide enough to adequately cater for a capacity crowd leaving the revamped Adelaide Oval.

So surely the Torrens bridge is cheaper, especially as it is only half as long and not as wide?

On a cost-per-metre basis, it is actually more expensive. And what’s more, the spectacular bridge was primarily designed by Australians.

The Cox Group, designers of the Sydney Football Stadium, were the lead architects among the international design consortium.

Even in a country with no shortage of amazing bridges – Singapore also claimed number 17 on the World’s Top 20 list – the Helix stands out as a masterpiece.

Critics are saying it also brings into question the $40.6 million cost to cross the River Torrens with what is little more than a concrete slab.

FOOTBRIDGE FIGHT ON THE FIGURES

AWARDS: Ranked 14th on a list of the World’s Best Bridges.

From the Adelaide Advertiser, 1st June 2014

In response, the council said it could lobby the AFL for better match time slots.

Cr Malani said games should be scheduled around meal times.

“Anecdotally, games are beneficial to the city when they are after key meal times,” Cr Malani said.

“If there was a game after lunch, you could have lunch … before hand or a schnitzel and a beer after. “For me, it’s about working out the times we benefit and the movement of people and linking that information together.”

The council says it will monitor transport figures and talk to traders to compile “quality data” to mount a case, rather than relying on “anecdotal evidence”.

North Adelaide traders were expecting business to boom on the back of AFL matches at Adelaide Oval but few have seen the benefits they hoped for.

Many said football fans were going into the city before and after games, rather than to North Adelaide.

Notable exceptions have been pubs — including the Cathedral Hotel, which is planning a major renovation to cash in on Adelaide Oval crowds — and the Queen’s Head, on Kermode St.

AFL spokesman Patrick Keane said the City Council should make match time requests through the two Adelaide-based clubs when fixtures were drawn up before the start of the season. Port Adelaide train under the lights at the Oval Source: News Corp Australia

“Well I’m a regular out at the soccer and we always have a meal before if the match is at 7.30pm,” Mr Johnson said.

“It would be a good idea so people could grab a quick meal.”

“They do time it at an inconvenient time for us,” Mr Timpamo said.

“They start it right in the middle of when we start dinner service.”

The Crows train at Adelaide Oval.