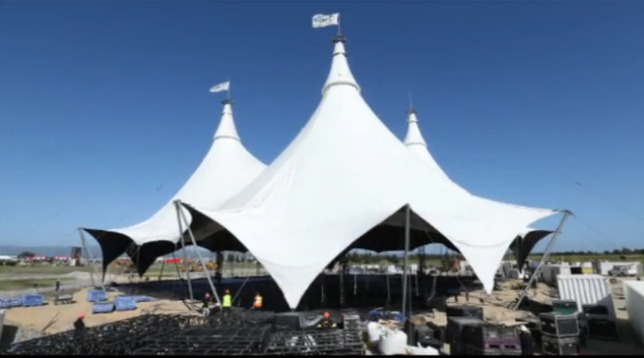 TTN: The circus is in town – and occupying a large part of Adelaide’s West Beach accommodation. Adelaide Shores Stay and Play – unclearly communicated as a golf resort/ Big 4/ caravan park – has filled its 100 hectares to the brim with circus folk and… horses.

FOUR years ago, Renato the draft horse was destined for a French butcher.

Now he lives the life of a prize pony, receiving daily massages and having his flowing blond locks plaited as he travels the world performing in equine extravaganza Cavalia.

Blind in one eye from a birth defect, the eight-year-old chestnut stallion was bred for France’s specialist horse meat market, but since his last-minute rescue from death row he has become an audience favourite in the hit international production.

One of the show’s human stars of the show, Florida born Katie Cox, says Renato holds a special place in the hearts of the cast and crew who rescued him.

“Renato is amazing … he’s a superstar of our show,” she said.

Cavalia , which also stars 33 riders and acrobats that perform with the horses, has toured more than 60 countries in the past decade and starts its three-week Adelaide run on Wednesday.