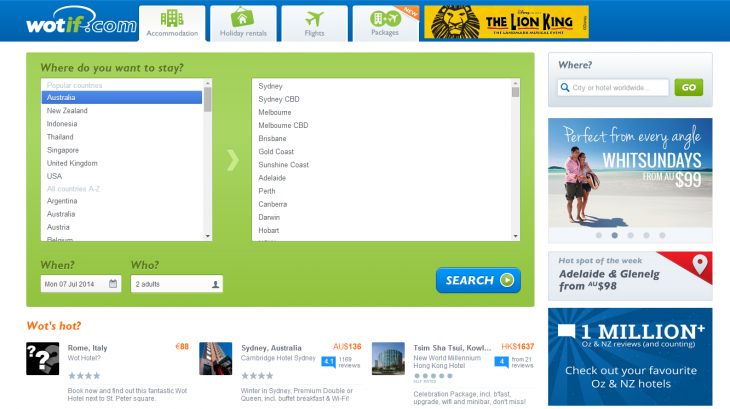 The takeover could lead to higher commission rates charged to hotels listed on Wotif, the ACCC has warned. Photo: Adrian Brown/Bloomberg

The competition regulator has raised possible concerns that Expedia’s $703 million proposed acquisition of Wotif.com could lead the US travel giant to increase commission rates charged to hotels listed on the Australian accommodation site.

Rather than giving a green light to the deal, the Australian Competition and Consumer Commission on Thursday released a “statement of issues” outlining competition issues that have arisen to date.

The ACCC said its view, after making enquiries, was that bricks and mortar travel agents such as Flight Centre, Helloworld and STA Travel were unlikely to be a strong constraint on the operations of online travel agencies like Wotif, Expedia and Priceline’s Booking.com and therefore do not form part of the relevant market.

“Commission rates charged by Expedia and Booking.com in Australia are lower than the rates charged by those companies in other parts of the world,” ACCC chairman Rod Sims said. “The presence of Wotif may be a contributing factor to this difference. Market participants have expressed concern that the removal of Wotif as an independent competitor will allow Expedia to increase its commission rate.”

The ACCC said Expedia would continue to face competition from Priceline if the Wotif deal was completed, but there might be limited incentive for the US-based groups to compete by offering lower commission rates to accommodation providers.

Mr Sims said the recent expansion of Booking.com and some smaller online travel agents like Hooroo might suggest that barriers to entry and expansion were not significant. However, he added market participants had identified barriers in the form of the high cost of advertising needed to capture a critical mass of consumer “eyeballs” and bookings and sunk costs associated with developing an online platform.

Wotif has said it agreed to the offer from Expedia in part because it faced tough competition from overseas groups like Expedia and Priceline, which have ramped up advertising spending in the Australian market over the last 18 months.

Mr Sims said the ACCC’s preliminary view was the Expedia offer for Wotif was unlikely to raise competition concerns in the market for the online distribution of air travel and other travel products such as holiday packages, car hire and cruises.

Wotif does sell air tickets and package holidays, but it is a much smaller business for the company than accommodation sales.

The ACCC has invited further submissions from the market by September 19. As a result, its final decision on the deal will be deferred to October 2.

Wotif on Thursday acknowledged the ACCC statement and said it would work closely with the regulator to resolve any issues identified as a result of market enquiries . A scheme booklet with an updated timetable, including shareholder scheme meeting details, is due to be released shortly.

Expedia is offering $3.06 a share cash plus a 24¢-a-share fully franked special dividend for Wotif via a scheme of arrangement, implying $3.40 a share of value for those able to take advantage of the franking credits. Wotif shares closed at $3.26 on Wednesday before the ACCC released the statement of issues.